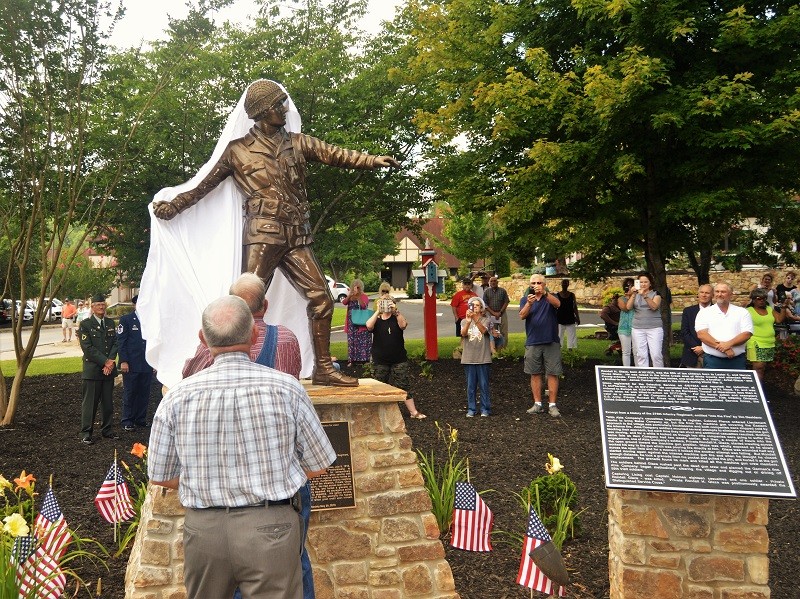 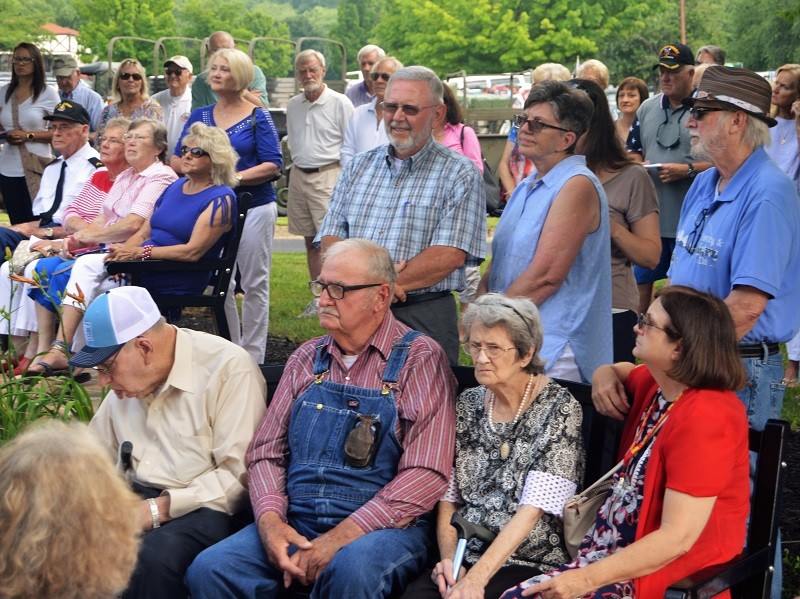 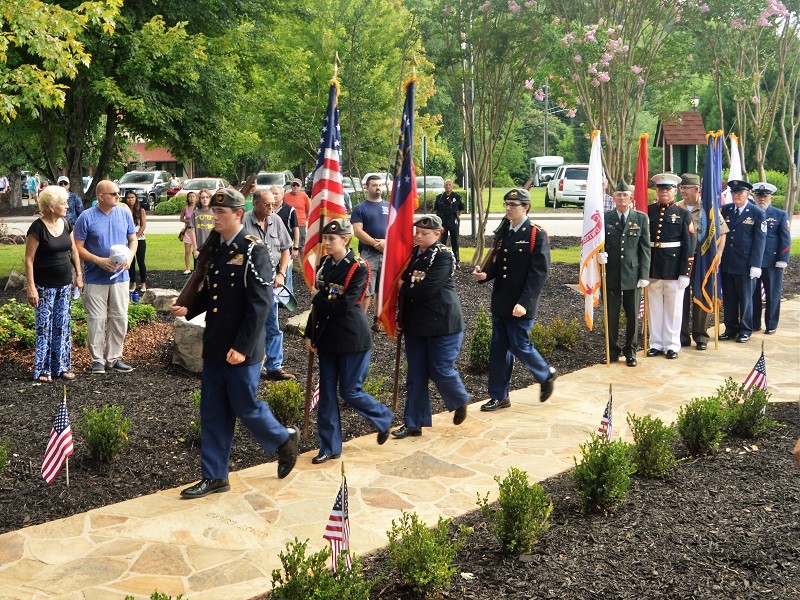 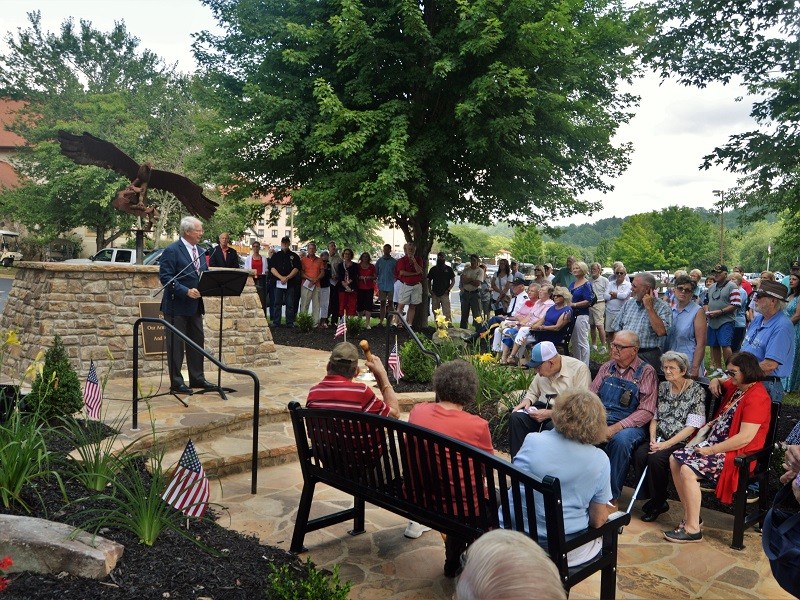 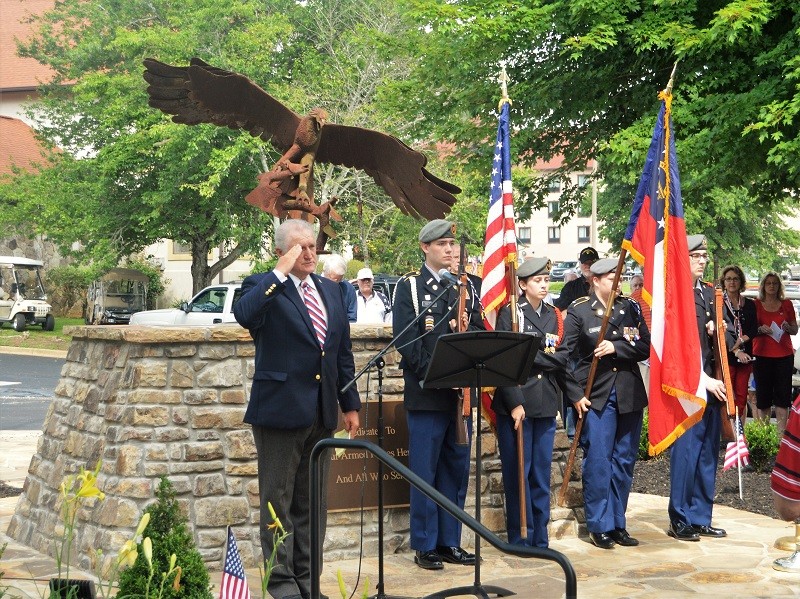 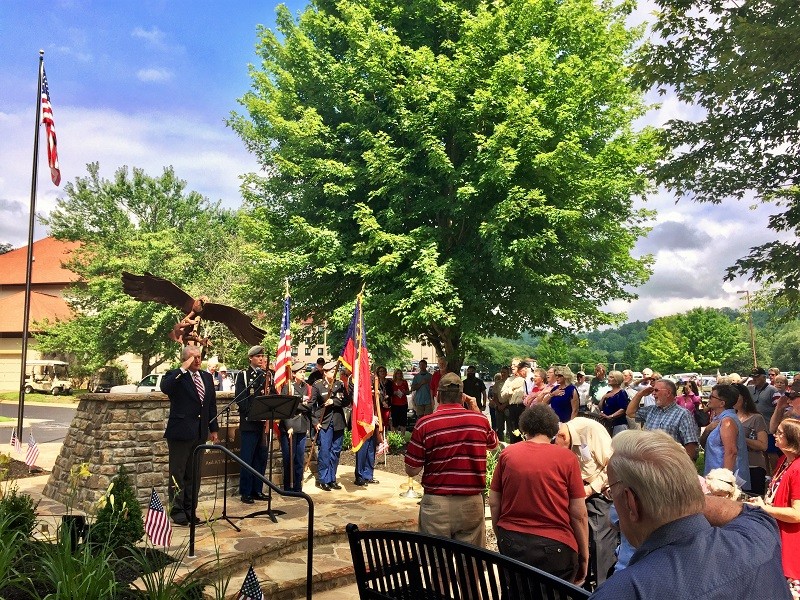 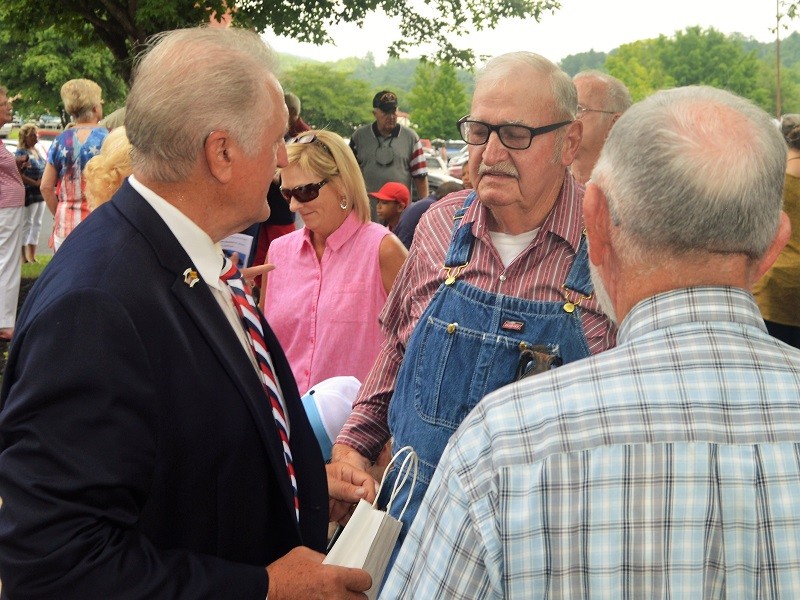 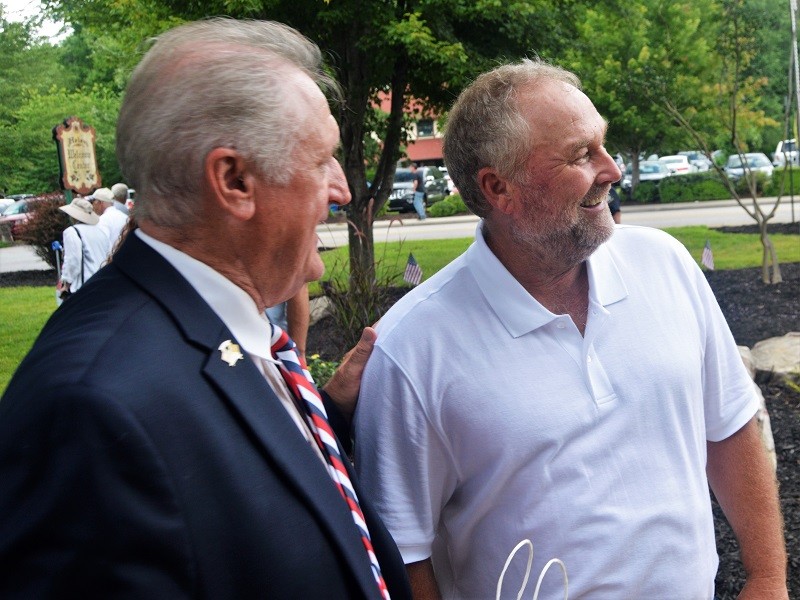 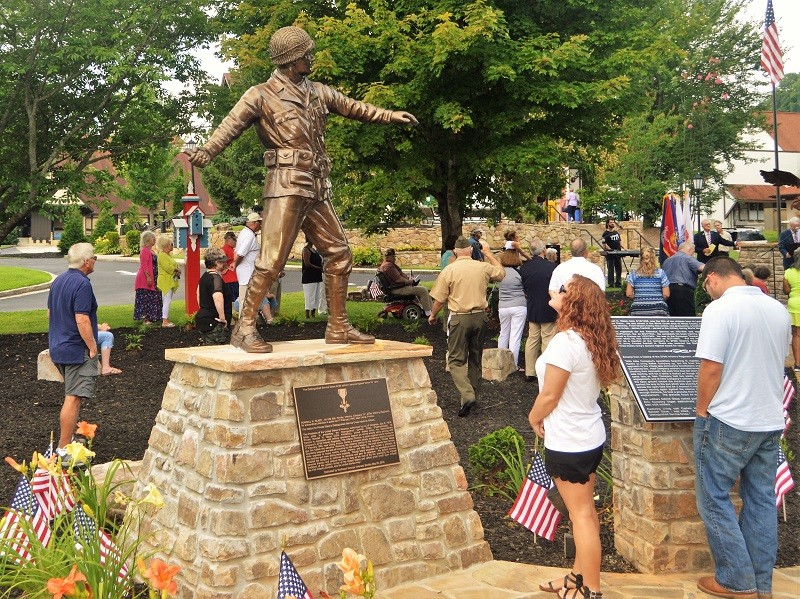 HELEN — The grounds below the Helen Welcome Center were filled with activity Saturday morning as the city prepared to dedicate the Helen Veterans Park, featuring a statue of Pvt. Rondall H. Glaze, White County’s highest-decorated soldier.

“Helen came from a logging town to an Alpine Village in about 105 years,” Mayor Jeff Ash told those gathered. “Through the course of that 105 years, we’ve been through wars; we’ve had a lot of people that died in those wars; and we’ve got a lot of people who have served.”

Ash, who has served the city for more than four decades, said dedicating the new park is the highlight of his public service career.

Ash was interrupted by applause and cheers from those gathered.

“You know, you get cold chills standing up here looking at this crowd,” Ash said.

In delivering the invocation at Saturday’s service, Pastor Jim Holmes of Helen First Baptist Church said, “Father, we thank you that there is this little town in the North Georgia Mountains that still sees this as vitally important to remember and to recognize, and to pray your hand of blessing on these branches of military and for this country.”

David Vandiver did the stonework at the new park, on land that is very sentimental to him.

“This property originally belonged to my daddy, and he sold the property here around ’68,” Vandiver told AccessWDUN. “He would be just tickled pink to know this was what it became. He actually had a rock crusher on here, the gravel business.”

Glaze completed his training and sailed to Europe on Jan. 25, 1945.

After serving for less than a month in the European Theatre of Operations, Glaze, 18, was killed in action on Feb. 17, 1945, when he voluntarily and single-handedly attacked a German crew-served machine gun emplacement, killing the crew and enabling his company to advance and achieve its mission.

In addition to the Distinguished Service Cross, Glaze was awarded the Combat Infantryman Badge, the Bronze Star Medal, and the Purple Heart. His remains were returned to Cleveland and buried at Union Grove Congregational Holiness Church Cemetery.

“I can’t imagine what it was like for those people,” Vandiver said of Glaze’s service and that of countless others. “I have appreciation for what they did for us.”

One of Glaze’s brothers, Jackie P. Glaze, was joined by Pvt. Glaze’s nephew in unveiling the statue, located prominently in the park at the intersection of Brucken Strasse and Edelweiss Strasse, directly behind the Helen Welcome Center.

“It meant the world,” Jackie Glaze tearfully told AccessWDUN after the ceremony. “I told them I couldn’t get up there. I’d have loved to have gotten up there and made a speech.”

Ron Webb, president of the Northeast Georgia Veterans Society, served as master of ceremonies for the statue dedication.

“We did the war casualty memorial at the Freedom Park [in Cleveland] about two years ago, and we came across the information on Glaze, and it was such a huge heroic act that we knew we had to do something for him,” Webb said.

Webb praised the Helen City Commission and former Commissioner Fred Garmon, who designed and supervised the construction of the Helen Veterans Park.

Ash was joined at the presentation by Helen City Commission members Geneva Elwell, Steve Fowler, Lee Landress and Cinnamon Spurlock, and by former Commissioners Garmon, Judy Holloway and Helen Wilkins, who were in office when the project began in late 2017.

“Mayor Ash and the council could not have been more cooperative,” Webb told AccessWDUN after the ceremony. “We appreciate the patriotism of the Helen City Government and all of the citizens of Helen.”