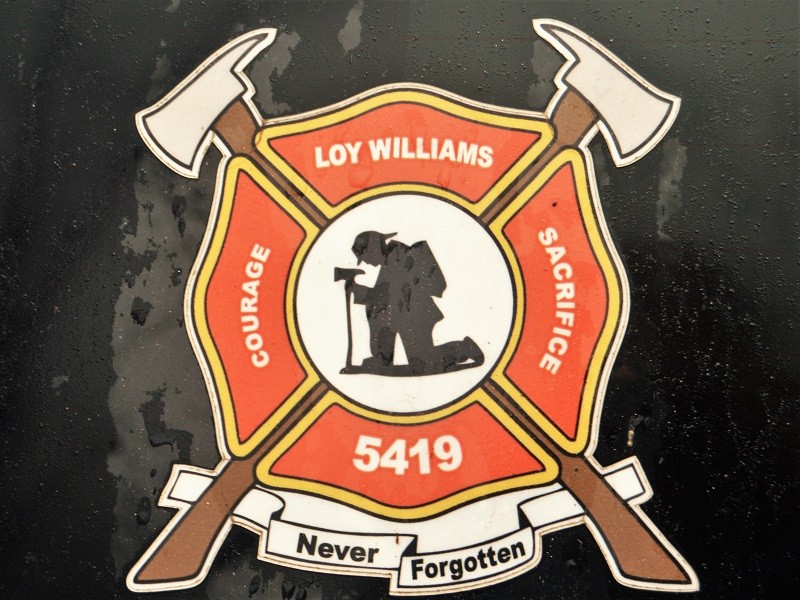 Decals like this one serve as reminders that Firefighter Loy Williams paid the ultimate sacrifice while battling an arson fire at New Salem United Methodist Church in Banks County on New Year's Eve 1998.
Rob Moore 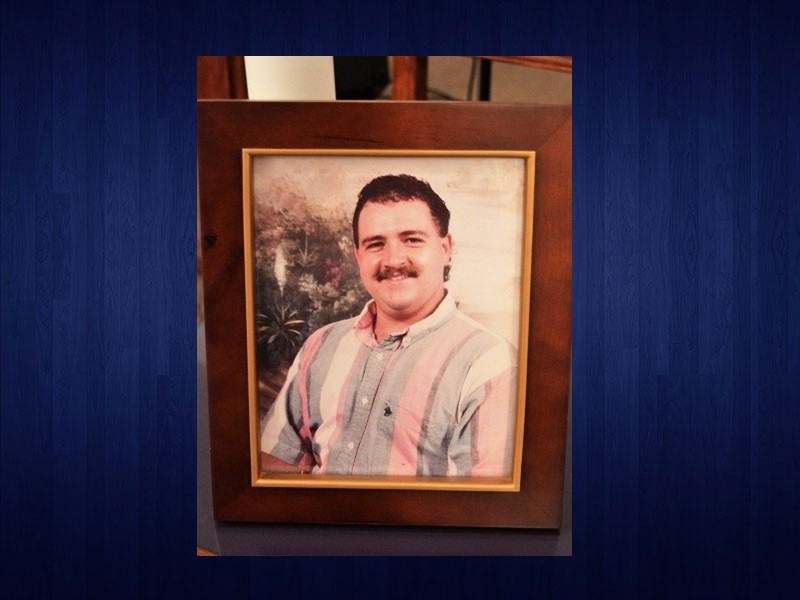 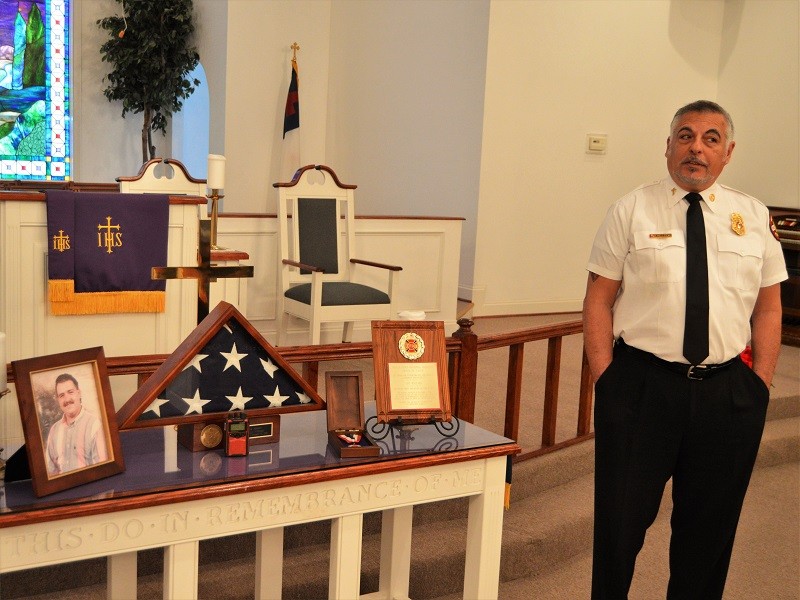 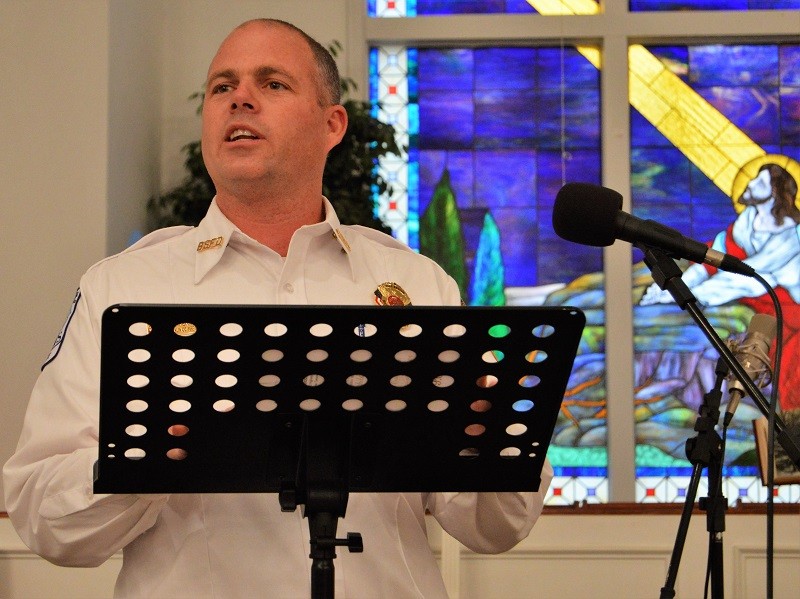 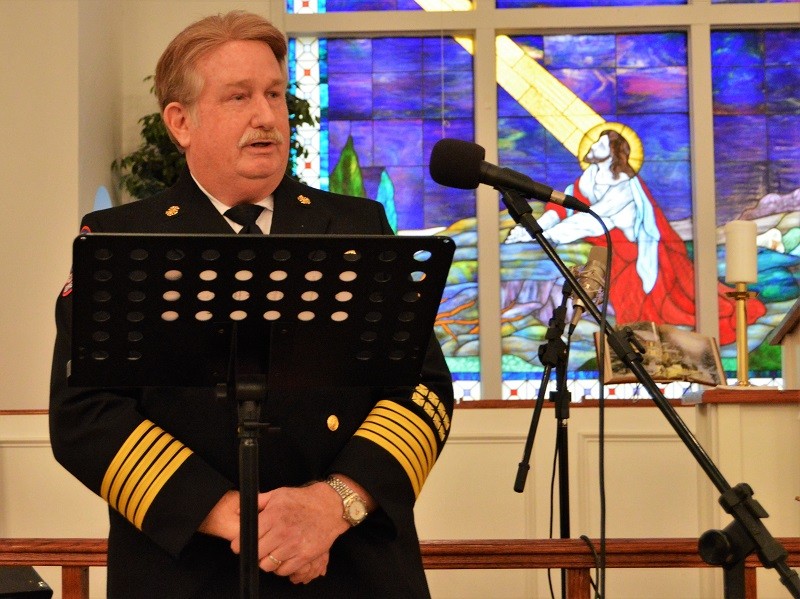 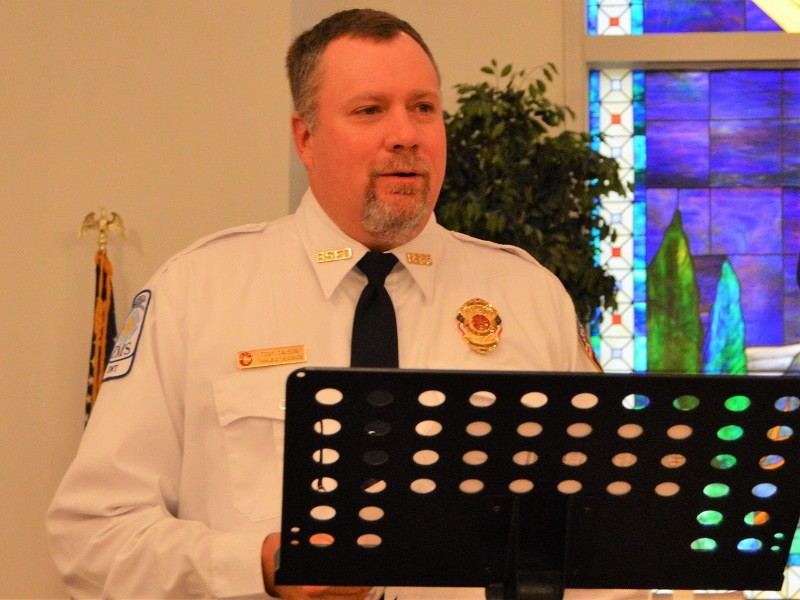 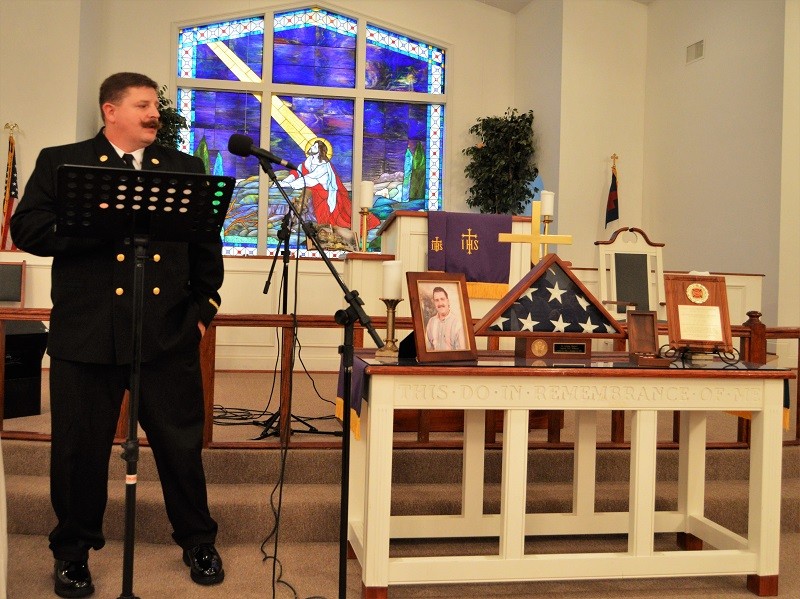 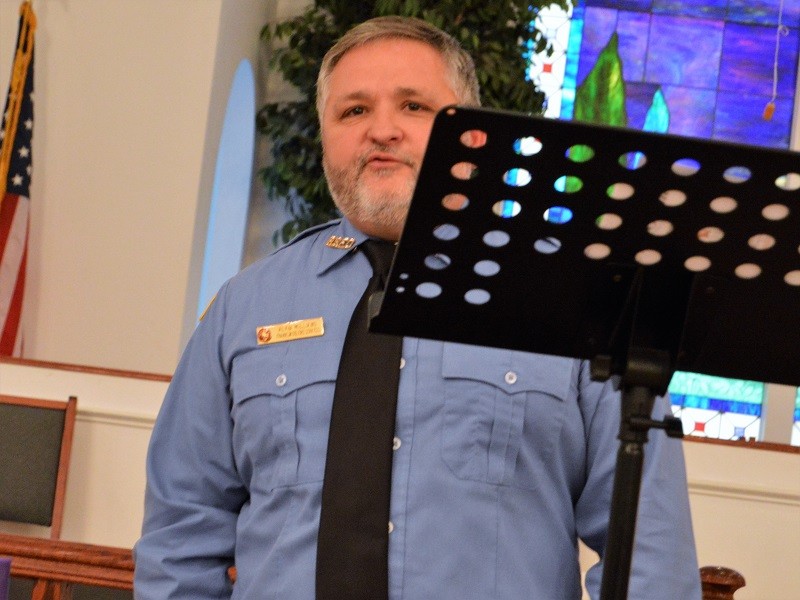 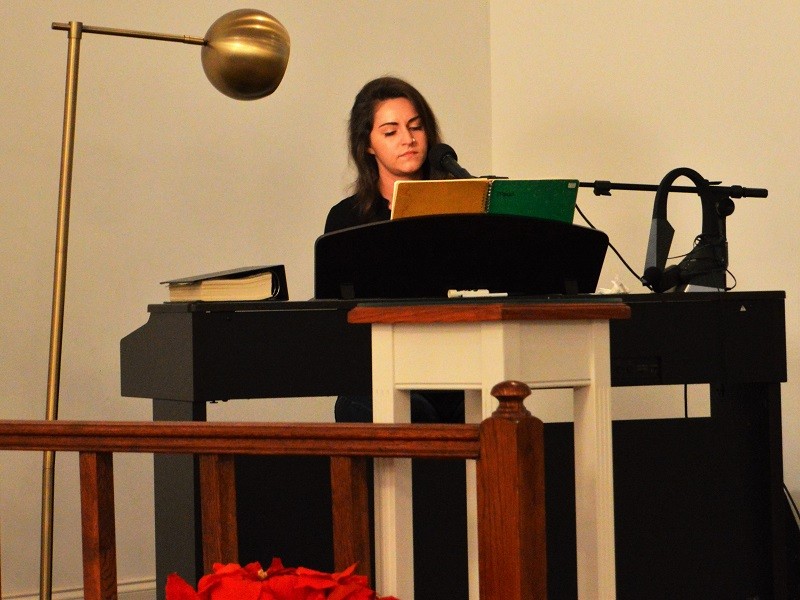 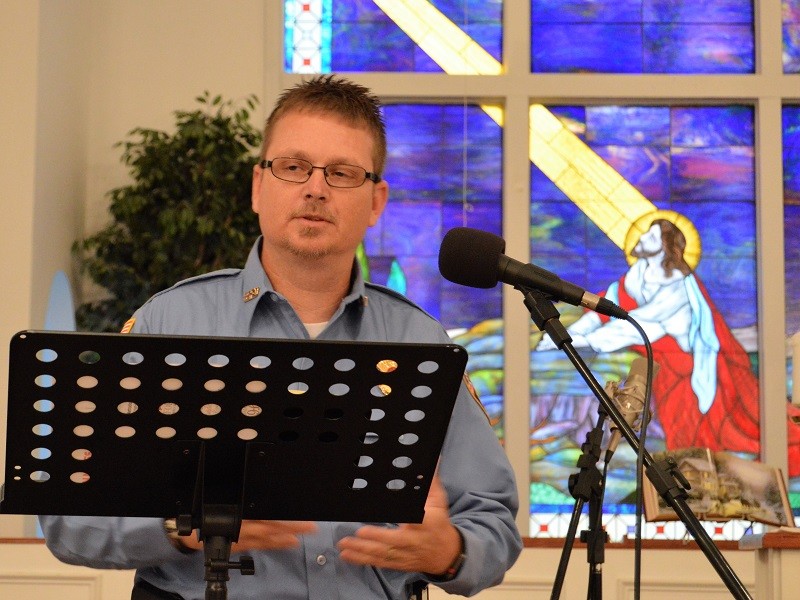 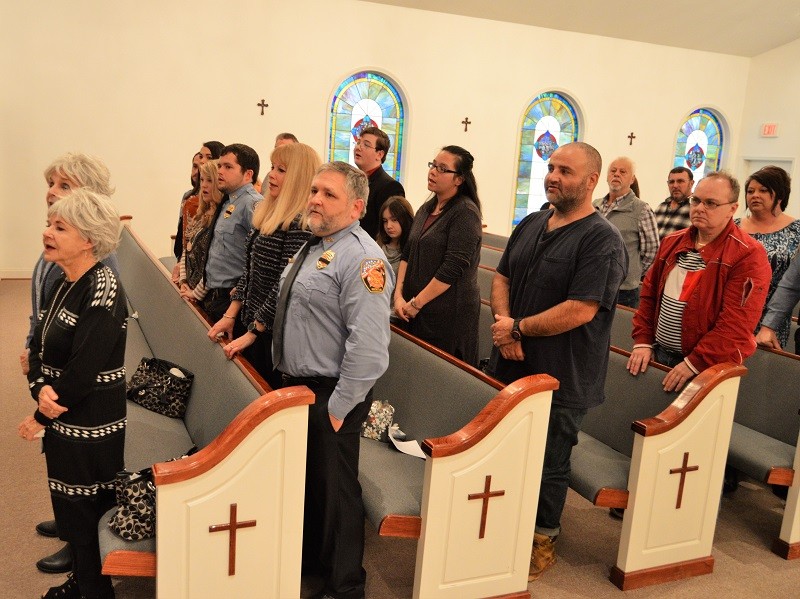 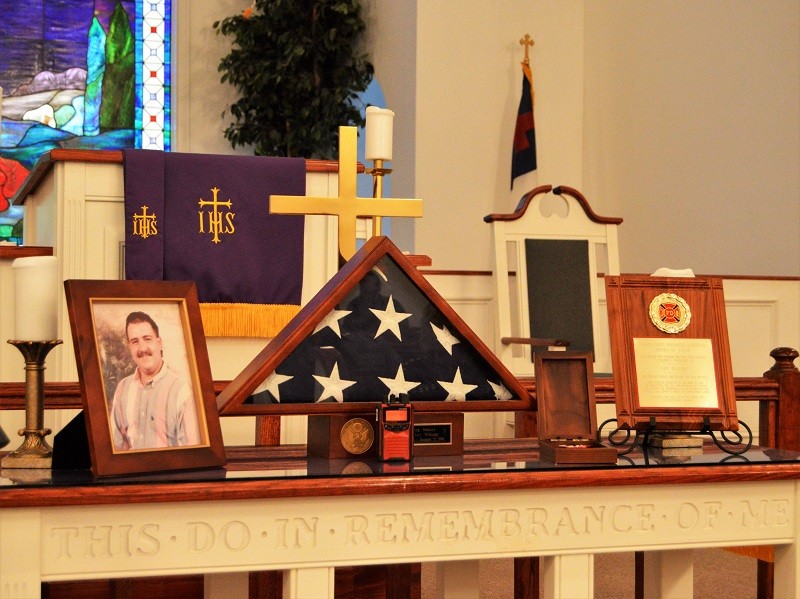 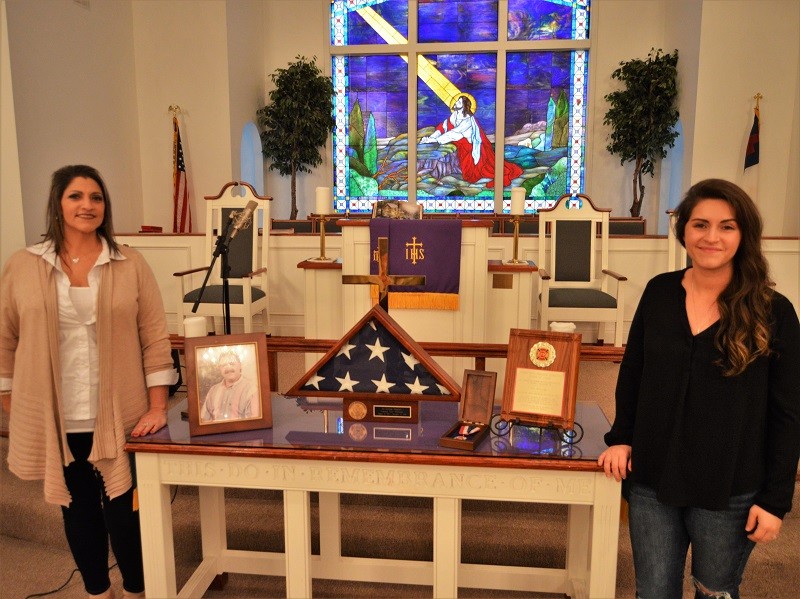 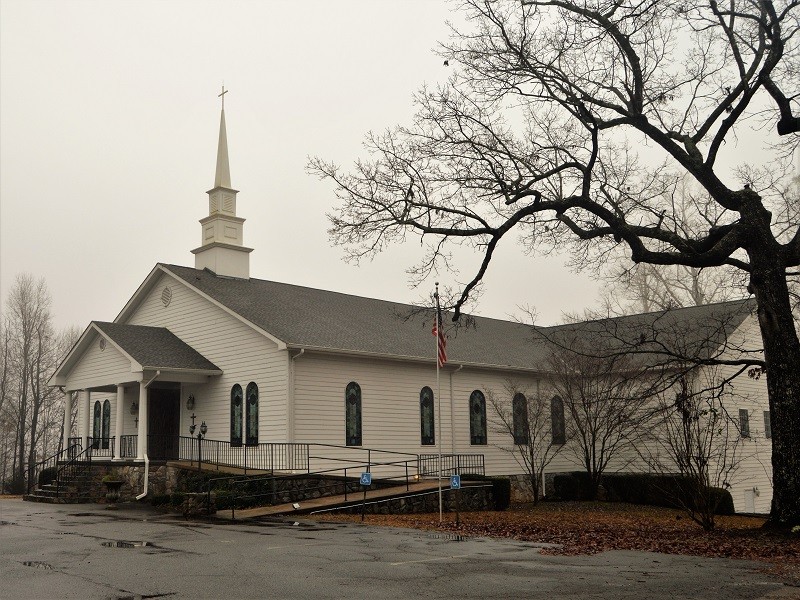 HOMER — Twenty years after a self-proclaimed Satanist set fire to New Salem United Methodist Church in Banks County, the community came together Monday to remember Loy Williams, the firefighter who gave his life battling the blaze.

A volunteer firefighter in both Banks County and at Bold Spring Fire Department in Franklin County, Williams was only 27 when he and his brother Alvin rushed down Ga. 59 to reach the burning church, a call from which he would not return.

Pastor Luis Ortiz, who was pastor of New Salem United Methodist Church on New Year’s Eve of 1998, spoke of Williams’ sacrifice and his impact on the church congregation and the community.

“This building sits here today because of Loy,” Ortiz said. “His life was not lost in vain. If it wasn’t for his loss during that fire, this church building would not have been completed in a record time of two years, debt-free to this congregation.”

“I remember that night like it was yesterday, even though it was 20 years ago,” Ortiz told those gathered. “I remember standing outside by the ditch with the members as the members were in tears as their building was burning up in flames. I remember when the building took a deep breath inward and we watched it like it was in slow motion as it exploded outwardly – all the walls exploded, and the steeple collapsed. And I remember all the firefighters that were surrounding the building being spread around, pushed from here to there like cartoon characters – and I remember frantic calls on the radios: ‘We’re missing people! We’re missing people! Where are they?’

It was during those panicked radio calls that firefighters discovered Williams had not made it out of the burning building during the collapse about 10:20 p.m.

“They realized there was one man missing in action and he was still inside the building underneath that steeple,” Ortiz said. “Twenty years have gone by and we’re now about to enter a new year in 2019. In 1999, it was not the same spirit. It was a sad, gloomy day as the clock clicked from 1998 to 1999, and we entered a new world in a completely different atmosphere, entered a new year in a completely different atmosphere and just a horrific scene. As we stood out there and watched, many wondered, ‘What’s next for us?’ I know the church did. I know the family did. Many of the firefighters were struggling with their own pain. Some of them were trapped and dragged out of the building. Some of them were just emotionally disturbed when they realized one of their brothers had died.”

Three firefighters who had been inside the church with Williams were hurt and were treated for burns and other injuries.

Williams’ daughter Savanna was only 9 at the time of the fire.

Now, 20 years later, married with children of her own and a prolific songwriter, Savanna Williams Thomas wrote a song for Williams Sunday night and sang and played it for those gathered to remember him Monday afternoon.

“I just wanted to write one for him,” she tearfully told those gathered.

Seated at the keyboard, Thomas played and sang, “Jesus is making something beautiful out of this whole thing. He’s doing it in me. I was only 9 years old, just a child. How heartbreaking it was to hear those dreaded words, ‘Your Daddy’s gone, baby.’”

Following the service, Thomas talked about how meaningful it was for her to be able to return to Georgia to participate in Monday’s remembrance service.

“It meant the world to me to be able to sing my song for him today in front of everyone,” Thomas said. “I was so young when he died that I always felt a little robbed because I wasn’t able to take everything in in its fullness and remember things with clarity. Being a part of this memorial today kind of felt like another funeral for him, but this time I could experience it and be a part of it the way I had always wanted.”

Thomas said she was grateful to see the impact her father had on people in the area, and to hear stories about him in the service that was organized by Bold Spring Fire and Rescue Chief Garren Hall and Assistant Chief Tony Davison.

“I can’t put into words how grateful I felt being able to have a service for my dad today,” Thomas said. “To know that he touched so many lives in the community and surrounding communities in such a way that they would pay their respects 20 years later is truly an honor. I’m honored to be his daughter and to be able to say, ‘That’s my dad’.”

“Satan sent that man here to do damage,” Nichols said. “Loy got caught in it. That’s the circumstances of our profession.”

Nichols, who worked in another county at the time of the New Salem fire that claimed Williams’ life, researched the incident through news articles and worked to learn more about Williams’ life.

Nichols talked of Williams’ family, his vocation as a brick mason, and his dedicated service as a volunteer firefighter for two communities.

“He always wanted to be sure everyone was out before he left the burning building,” Nichols said. “And that’s what happened the night that he died. Again, not only was he protecting the citizens and the community, but he protected all of us, his brothers.

“I didn’t know Loy, but one day I’ll shake his hand at the face of God,” Nichols said.

Firefighter Chuck Bray, who has served as a driver/engineer with DeKalb County Fire Department for 11 years, was one of those inside the church on New Year’s Eve 1998.

Bray was two or three steps up from the pulpit when the roof of the church caved in that night.

“Loy’s been gone for 20 years now and I have done everything that I could that we don’t forget, and that’s very important to me,” Bray said. “Before I go to sleep every night, if nothing else I promise you I think of Loy a little bit. He’s on my helmet at work, 402 LOY; my kids’ little firefighter suits, they’ve got that little cross on their helmet. It means a lot to me.”

Alvin Williams recalled his brother’s passion for training, whether running drills, training with ladders or whatever else would better prepare them for their duties.

But he recalled the less serious side of his brother as well, and his life outside firefighting.

“Loy loved to laugh and have fun no matter what he was doing,” his brother recalled. “Pretty much anybody that ever met Loy loved Loy. And Loy loved his church. The fire service wasn’t the only thing he loved. He loved his church and he loved his family. He adored his daughter Savanna. The day she was born was the happiest day of his life. He loved our kids, Jason and Wesley. He never missed a ballgame that any of these kids were in. He was just there.”

Alvin Williams discussed the family dinner their mother Gertrude prepared once each week, and the family getting together outside after the meal and playing the sport of the season in the yard.

“As much as Loy loved Jason and Wesley, I know he’d be thrilled that they are part of the fire service as well,” Alvin Williams shared. “And I can see some of Loy’s personality come out in each of them – his dedication to the fire service, his love of family, and his outgoing personality. Loy is truly missed and spoken about often in our family. It’s hard to believe it’s been 20 years. It’s hard to believe he’s been gone for 20 years. Memories of that night are just as strong as if it just happened yesterday. That night our family changed forever. We all missed out so much because of Loy being gone. I miss you, Brother.”

Immediately following Thomas’ song, pagers alerted across the sanctuary as Franklin County 9-1-1 set off the radio pagers for Bold Spring Fire and Rescue in remembrance of Williams on the 20th anniversary of his death.

Pastor Stacy Lynch of Bowman Church of God, who works in public safety, was the final speaker and related a story shared by Alvin Williams about a near-miss incident involving the brothers on Interstate 85 sometime before the New Salem fire and the discussions that followed about death.

“They began to talk about death and how they would want to go and said [Loy] had shared with him that day that when his time came, he wanted to go fighting fire,” Lynch said. “Mr. Loy gave his life fighting for a church, a place where people can come and hear the good news of Jesus Christ. Mr. Loy not only loved firefighting, he loved the Church.”

In keeping with Loy Williams’ love of singing in church, those gathered concluded the service by “Amazing Grace”.