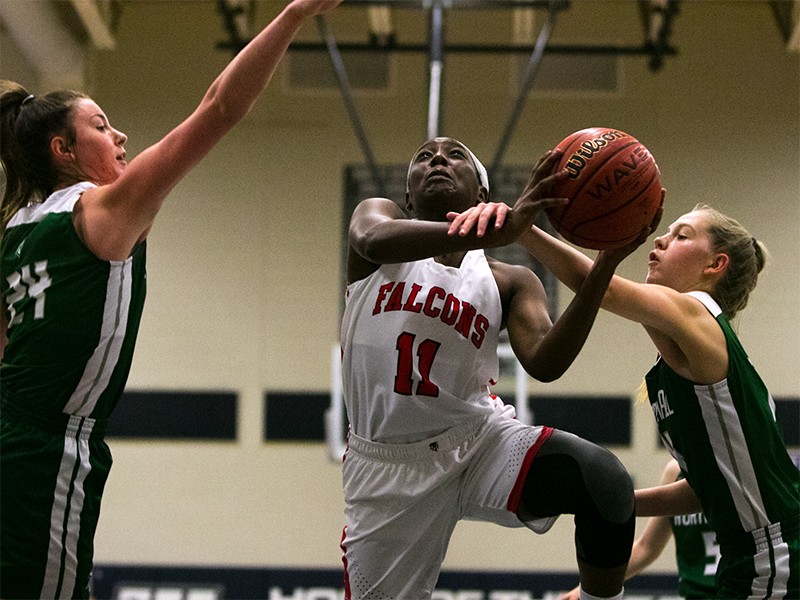 OAKWOOD — No Taniyah Worth. No Lexi Sengkhemmee. No problem for the Flowery Branch girls.

The Lady Falcons, navigating their first season without the two graduated stars, completed a dominating run through the 2018 Lanierland Tournament Saturday with a 48-23 win over North Hall in the finals at the West Hall gym.

It was the fourth consecutive Lanierland title for Flowery Branch (11-3), a feat not accomplished by any girls program since West Hall captured four straight from 1997-2000.

The loss for North Hall (11-4) denied the Lady Trojans their first Lanierland title since 2009.

Senior Ashley Woodroffe had 13 points for the Lady Falcons and was named the Girls MVP after averaging 15.6 points per game in the tournament.

A renewed defensive focus and offensive balance since a rough opening-season loss to Dawson County have been the spark of 11 wins in the Lady Falcons' last 13 games.

“It’s tough for a group of seniors to win all four years so I’m extremely happy for them,” said Flowery Branch coach Courtney Newton-Gonzalez. “I thought our defense was the key again for us.”

All five Flowery Branch starters scored in the first half and used a series of steals and North Hall turnovers to turn a slim 10-6 lead into first a 10-0 run to close out the first quarter and then building a 27-10 halftime advantage. The Lady Falcons blew it open with a 17-2 third quarter.

The Lady Trojans, who were into the finals for the first time since 2012 and looking for their first title since 2009, could not buy a basket as fatigue looked to set in after two tight, emotional games in the first two nights.

“Well, you know Flowery Branch is going play great defense so you can’t miss open shots and we just couldn’t get anything to fall,” North Hall coach Kristi House said. “It was a grueling week but we feel we can build off this.”

Both teams were sloppy at the beginning as both teams missed their first six shots collectively. North Hall’s Maci Gillespie broke the scoreless tie but Flowery Branch’ s Ashley Scott answered 30 seconds later with a 3-pointer for a 3-2 lead and the Lady Falcons never trailed again.

Woodroffe’s slashing attacks at the basket steals, and assists were a spark for the Lady Falcons outscoring North Hall 22-6 in the second and third quarters.

Her versatility was a key element to her being named the tournament MVP.

“North Hall is a tough team and we felt like we needed to come out defensively to get things going for the offense,” Woodroffe said. “It feels pretty good to win this but really we won as a team.”

Newton-Gonzalez confirmed that defense was the pregame focus.

“North Hall had come off those two big wins and we just felt that our goal would be to lock in on defense,” she said. “We did a great job I thought.”