Meister, believed to be state’s oldest active firefighter, remembered as 'one of a kind' 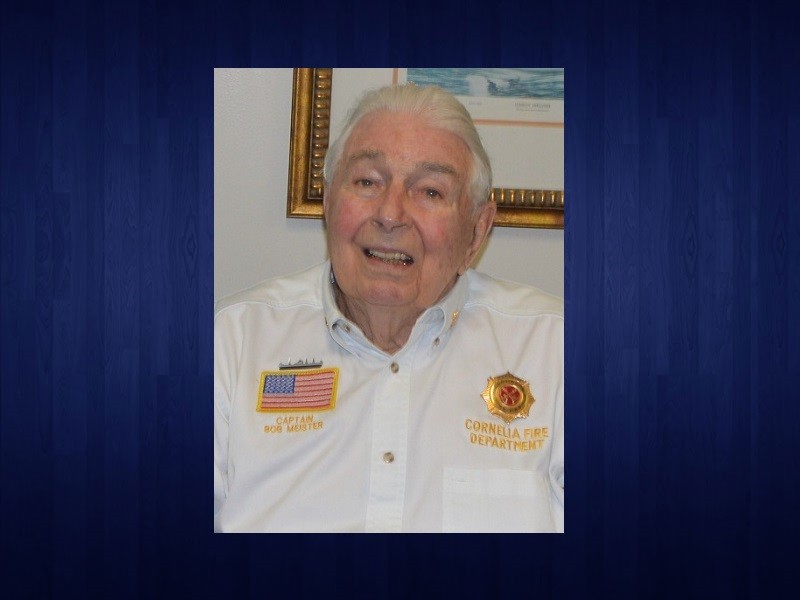 DEMOREST — A man who dedicated more than 60 years protecting and serving the residents of Cornelia as a volunteer fireman was remembered fondly in Demorest Thursday.

Volunteer Capt. Meister was honored in 2017 for 63 years of documented service with Cornelia Fire Department, but city officials said they believe he served as many as 70 years with the department.

“To me, he was a very dedicated support volunteer,” said Interim Fire Chief Billy Joe Jenkins. “He wasn’t one who just had a title, but he was really supportive not only of the citizens of Cornelia, but he supported the firefighters. He really took it to heart. Even when he got up in age, he really put his whole self into doing what he knew he had been given to do or had been called to do.”

During his time volunteering with the department, Meister responded to the 1977 dam break that claimed 39 lives on the campus of Toccoa Falls College in Stephens County; the 1984 plane crash that claimed the lives of six men on the campus of Mt. Airy Baptist Church; and to numerous other high-profile emergencies. But it wasn’t the media-covered events that endeared Meister to his community, but rather the everyday fires, wrecks and other emergencies to which he responded at all hours, even into his late 80s.

“At one point in time, we had to kind of slow him down,” Jenkins said. “It didn’t make any difference if it was a medical call, a fire call or whatever, you’d look and you’d see Bob there giving a helping hand and doing whatever he could do.”

Cornelia City Manager Donald Anderson, who also is a firefighter, recalled Meister fondly and spoke highly of his service to the community.

“Bob was a huge asset to the city,” Anderson said. “I was talking to [retired Fire Chief Frankie Smith] and he said he thinks Bob volunteered for the city for over 70 years, which is huge — probably the longest volunteer in the state of Georgia, I would think.”

“I know a lot of times Bob did a lot of fundraising to buy equipment for the city, and donated equipment on his own,” Anderson said. “He was just a huge asset. Even up into his 80s, he still was a contributor on scene. He may not have been active on the fire scene as far as fighting fire, but he’d bring drinks to the firefighters and help out wherever he could. He was just always a huge contributor to the fire department and will definitely be missed by the City of Cornelia.”

Meister believed the fire department should be good stewards of the money raised or allotted to it, especially since he spent a lot of his time helping collect the donations.

“He didn’t believe in spending on unnecessary stuff,” Jenkins said. “He watched after the money.”

Meister worked with the department’s leadership to help them fund things in line with their goals for the fire department.

“He was very instrumental in helping Frankie carry out his vision by doing things for the fire department,” Jenkins said. “He was just an all-around great guy.”

One of those things included overseeing the aluminum can recycling efforts conducted by the department that now include collection trailers at both fire stations.

Other than emergency responses, that was one of his primary focuses.

“His main thing was that can fund, keeping those cans collected,” Jenkins said. “That was to raise money for the fire department to be able to buy different types of equipment. We’re talking about going to these places like ETHICON, Fieldale, all these places that put them out just specifically for him to come by and pick them up. He took that very seriously.”

Jenkins said whenever it was time for the department to raise money through a boot drive for Give Burns the Boot or other campaigns, Meister put aside other activities to be there.

That volunteerism continued well into Meister’s 90s, when Anderson remembers him “sitting at Walmart with a boot collecting money for the boot drive,” Anderson said. “He did that every year religiously for a week.”

And if the department was out on a lengthy fire or rescue call and didn’t see Meister on scene, “at 3 o’clock in the morning, you can bet that Bob Meister would be sitting at that fire station when we got back,” Anderson said. “He was one of a kind.”

There wasn’t a lot of glory to much of Meister’s service to the department and the community, whether doing station laundry, cleaning up around the station, or sharing fish he had caught with firefighters and others in the community.

“Bob was a person who would give the shirt off his back for anybody,” Jenkins said. “This day and time, people don’t have time for anybody, but Bob would take time to do whatever he could or whatever he had to do to help his fellow persons. The thing is it wasn’t like it was something hard for him to do. In other words, he did it with ease. He was glad to do it. He just enjoyed giving to people.”

Meister inspired many in public safety to further their careers and to be the best they could be for those they serve. One of those who excelled in part because of that encouragement is Jenkins.

“We don’t know what we miss out on until it’s gone,” Jenkins said. “He was a big, big push in my career being here with Cornelia with his many years.”

And even many young public safety personnel who may not have been around Meister know of his contributions to the profession.

“Us telling the story of who Bob was and what he was all about really made them have a respect for him as well,” Jenkins said. “I know my lieutenant drove all the way from Lavonia just to be able to come to his funeral. I think he means a lot to a lot of people that he didn’t even realized he reached, beyond the folks that he actually talked to or whatever.”

“He would take the time to talk to anybody,” Jenkins said. “I remember a lot of times we talked and he’d tell me stories about things we’d been through. It really gave me hope. If he could do it at the age that he is, then I should have no problem.”

Jenkins said it’s uncommon to hear of a person who spent more than 60 years with the same department.

“It’s very rare — very, very rare,” Jenkins said. “To me, it’s unheard of, especially in this day and time for somebody to be committed that long. He was the oldest active firefighter, as far as I know, in the state of Georgia. They don’t make them like that anymore.”

Meister took it on himself to care for the support vehicles in the department, whether one of the vans in the 1980s and 1990s or the Dodge pickup still used by personnel for errands and hydrant testing.

“He took it like it was his very own,” Jenkins said. “He was that serious. And he would get upset if you didn’t help him keep it clean.”

Meister wanted those vehicles to be in top shape because they were a symbol of the fire department, representing it at special events throughout Habersham County.

“He wanted to make sure he was in every parade,” Jenkins said. “It didn’t make any difference if it was in Baldwin, Clarkesville, Cornelia or wherever. If he had a chance, he was going to drive something in the parade. He took that very seriously because he wanted the city to have their emblem out there, the fire department to be recognized. He was proud of wearing the uniform and being called a fireman for the City of Cornelia.”

Meister was a longtime member of First Baptist Church of Cornelia and was a U.S. Navy veteran of World War II.

He was remembered in a memorial service Thursday in Demorest, attended by several dozen current and retired emergency personnel and scores of family and friends.

Memorials to Meister may be made to First Baptist Church of Cornelia, P.O. 96, Cornelia, GA 30531.