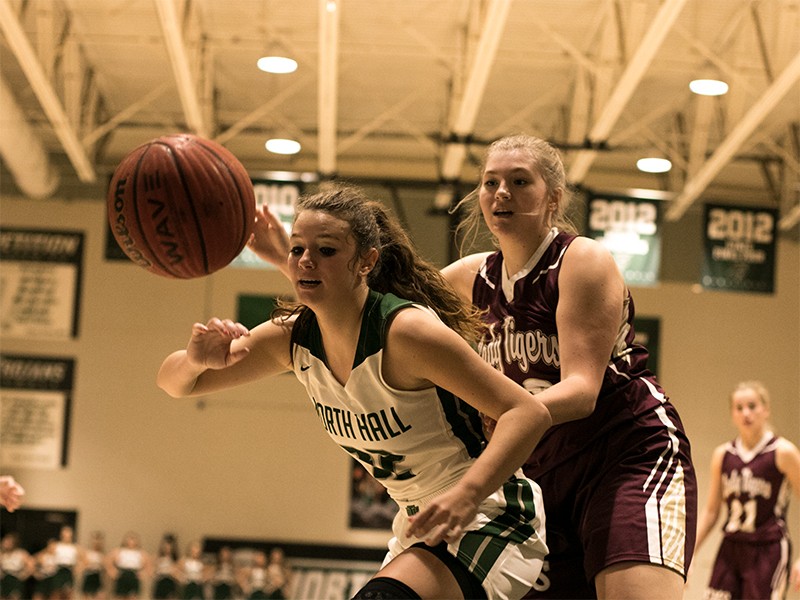 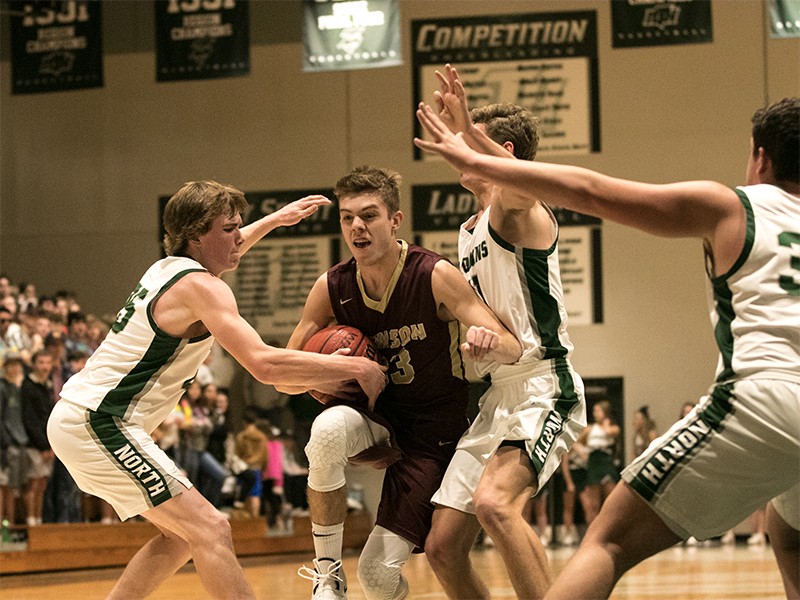 When it mattered most, the Lady Trojans held Dawson County to just three field goals over a 9-minute stretch to help them pull away and then hold on for a 58-55 win over the Lady Tigers in a key Region 7-3A showdown at the North Hall gym.

The Dawson County boys provided the split on the road holding off North Hall 46-36 in the nightcap.

The Lady Trojans (6-3, 3-1 Region 7-3A) turned a 39-38 third-quarter deficit into a 56-45 lead with 1:32 left as they used an aggressive mid-court trap to force four turnovers and several bad Dawson County shots. North Hall coach Kristi House said it has been an area they have focused on improving as they entered region play.

“These girls like to play fast and they’ve been having some success playing a little more aggressive,” House said. “This was a big win for us. Hopefully, we’re showing that we can compete and contend.”

After Shyla Sheffield converted a fastbreak basket to cap a 7-0 run and give Dawson County its 39-38 lead, North Hall’s defense sparked an 18-6 run. The Lady Tigers (6-3, 2-1 Region 7-3A) never got closer than the final score when Sophia D’Oliveira hit 2-of-3 free throws with 0.4 seconds left in the game.

Ansleigh Ferguson was a big presence on both ends for North Hall pouring in a game-high 16 points to go with 12 rebounds. Grace Hollifield and Rylee McCall each added 14 points for the Lady Trojans.

The two teams traded six lead changes and six ties in the first half. Mariah Benson gave Dawson County a 16-14 early in the second quarter but North Hall answered with a 10-2 run, capped by five straight points from McCall, for a 24-18 lead.

Dawson County pulled within two points, 31-29 by halftime, but the Lady Trojans opened the third quarter with a 7-3 spurt for their biggest lead at 38-32 before the Lady Tigers used their run to take their final lead of the game.

Both teams had chances to do damage at the free throw line. North Hall could have blown the game wide open but was just 9-for-26 from the line for the game letting the Lady Tigers remain close. Dawson County went just 14-for-23 from the line with several key misses late as they tried to mount the comeback.

“We have got to do a better job on free throws and it’s something we’ll have to address for sure,” House said. “But again, I’m proud of how the kids hung in there at the end.”

The Tigers used a 13-0 fourth-quarter run to take control and hit 8-of-11 free throws down the stretch to take a big Region 7-3A victory.

The win for Dawson County (7-2, 2-1 Region 7-3A) came a week after falling to defending state champion Greater Atlanta Christian and kept the Tigers within 1 1/2-games of first place.

“It’s good to get a win after we had a week off, but we’re still not where we need to be,” Dawson boys coach Chad Pittman said. “I felt like we didn’t play as hard as North Hall and in this region when don’t play your best you will get beat.”

The teams traded five leads for much of the first half with North Hall (3-6, 1-3 Region 7-3A) leading 10-9 after the first quarter on a Luke Gunter 3-pointer. The Tigers took a 19-18 lead into the intermission on a basket by Ahmad Kamara.

They traded four more leads in the third quarter with Dawson County leading 28-26 heading into the final period.

The teams traded 3-pointers and the lead to open the fourth quarter with North Hall taking a 32-30 advantage on Josh Cook’s trey with 6:32 left in the game. But the Tigers exploded for their decisive run with Ei Burrus draining a 3-pointer to get things started and Campbell Reed converting a three-point play for a 43-32 lead with 2:36 left.

The Trojans never got closer than 43-26 on Cook basket with 47 seconds left.

Burrus finished with a game-high 15 points to pace Dawson County. Luke Chism added 12 points and Jasper Gibson had 7 points for the Tigers.

Cook led North Hall with 14 points. Gunter had 11 for the Trojans.