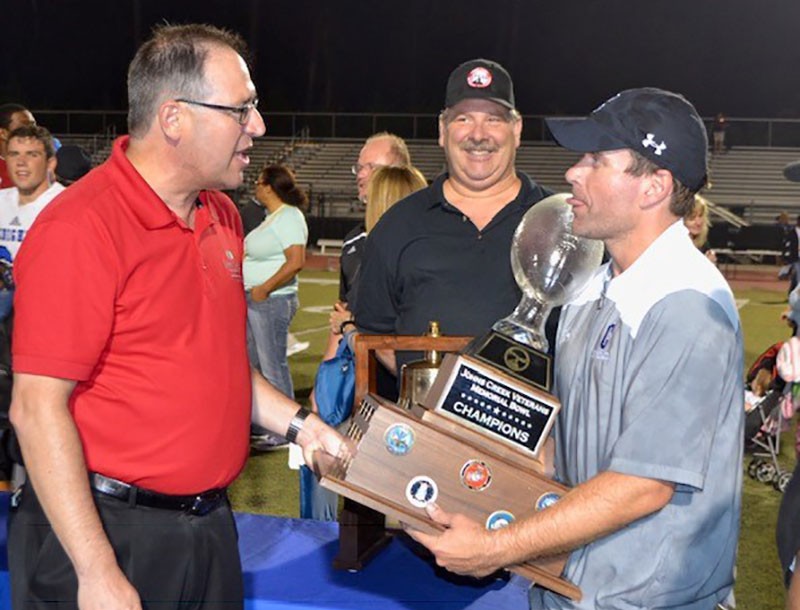 Air raid is code for flinging the pigskin all over the field, moving it without issue and causing the opposing defense to panic into submission.

It’s the fun and gun or simply put - the spread offense.

“If you look at our stats (at Centennial), every skill player is getting the ball,” he said. “ It’s even, too. It’s all spread out, because our big deal is we’re not going to have the opposing defensive coordinator circle one guy and say, ‘hey, if we stop that one guy, we’re going to win the game.’ We want them saying, ‘what are we going to do with all these guys?’”

No worries, though, Perry says he'll put the kids in the best possible situation.

"They’re all going to have various talent levels," he said. " But, what can we do is put them in the best spot so they will be successful on the playing field."

Perry knows what he’s talking about and has the stats to back it up.

At Centennial, he coached the top-gaining offense in Class 6A - 517 ypg. During his time as Gainesville’s offensive coordinator, the Red Elephants averaged more than 400 ypg and scored an average of 51 ppg.

“Obviously, I coached Deshaun Watson - what a blessing that was,” he said. “But I also coached Mikey Gonzalez (Gainesville) Messiah Dorsey (Gainesville), Max Hughes (Coffee) and Max Brosmer (Centennial). Every one of those guys was All-State, and some of those guys are playing college football now. I was very blessed to coach those guys. They’re the reason I got this job.”

The offense is fun to watch, especially when the team is lighting up the scoreboard, but, defense wins championships, right? Last season, the Vikings gave up an average of 51.8 ppg - worst in Class 3A. Perry assures Valhalla he’ll fix the Viking defense.

“We’re going to make sure that defense get’s shored up,” he said. “If you look at them, they were the worst in (Class) 3A. Obviously, you’re not going win a lot of football games. You’ve got to keep people from running the football and you’ve got to get off the field on third down. Our best players are never going to come off the field.”

Regardless of the Xs and Os, Perry will bring a renewed spirit to the Viking program. He says his passion for coaching and the kids drives him every day.

“I’m ready for 2019," he said. "When people come to Valhalla next year, they will be excited to see what we do there. I’m bringing a lot of coaches with me that have won state championships. I really believe it’s going to be something to see.”