5 Things: What we learned from Week 9 of high school football 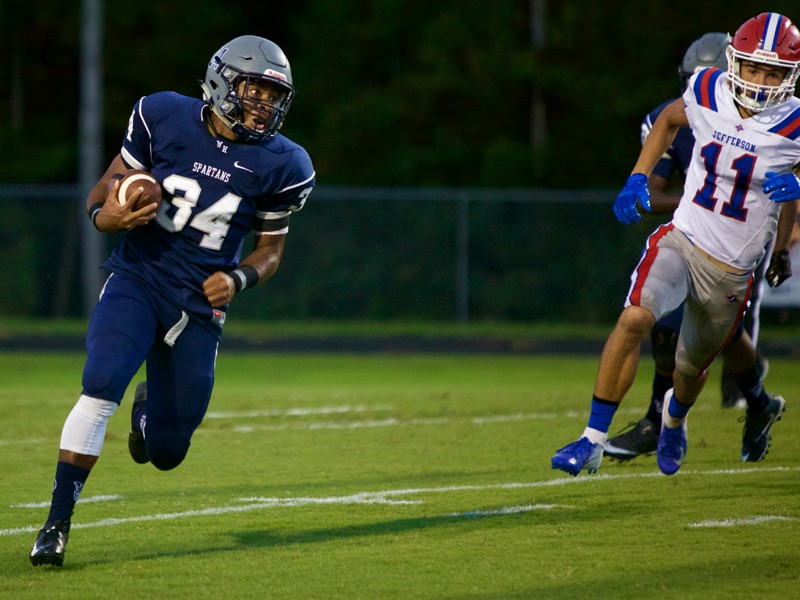 Here are five things we learned from Week 9 of the high school football season:

For Gainesville, the 2018 season has been filled with about as many frustrations as seven football games can contain. The Red Elephants started 0-7 for the first time in program history, losing by both close and wide margins. While both the offense and defense showed flashes of promise throughout the year, the two could not seem to come together on the same night, and even when they did, the team seemed unable to get over the hump in close finishes. That changed Friday night. On Senior Night at City Park Stadium against Winder-Barrow, Gainesville turned a scoreless game headed into the fourth quarter into a 20-7 win, snapping a nine game losing streak that dated back to November of 2017. The win did much more than simply lift the spirits of Gainesville players, coaches and fans, it also put the Red Elephants (1-7, 1-2 Region 8-6A) right back into the thick of the playoff hunt. Now, a huge game looms this Friday, as Gainesville heads into Barrow County to take on a surprising Apalachee team. The Wildcats (3-5, 1-2 Region 8-6A) under first-year head coach Tony Lotti snapped a 10-game losing streak of their own earlier in the season and have won as many games this year as they did in the 2017 and 2016 seasons combined. The winner of that game will have the inside track to the fourth playoff spot in Region 8-6A. Gainesville has not missed the playoffs since 1999, and now a season that seemed doomed to snap that streak has been given new life and one very big chance at redemption.

2. North Hall, Dawson County set for one of Class 3A's most impactful finales

So far, North Hall and Dawson County have had eerily similar 2018 seasons. The Trojans and Tigers (both 7-1, 3-1 Region 7-3A) have rolled through the majority of their schedule, both piling up video-game-like rushing statistics and turning most of their contests into running-clock blowouts. Each team's only loss came to Greater Atlanta Christian and each had to pull off a comeback in a non-region road game earlier this year, with Dawson County getting by Habersham Central 32-28 and North Hall topping White County 27-20. Now the two are tied for second place in Region 7-3A and will play each other in Dawsonville in the final week of the regular season on November 2 in a game that we now know will determine who gets to host a first round playoff game. The difference between hosting a first round game and going on the road would be a big one for any team, but especially for North Hall and Dawson County. The two have combined for only one playoff win away from home in their histories, and North Hall has never won a postseason game away from The Brickyard. The stakes combined with the excellence the two teams have displayed should make for a thrilling game.

The Banks County Leopards grabbed a huge 24-12 road win at Putnam County Friday. The win not only snapped a two-game losing streak and got them back to .500 on the season, it also put them in control of their own destiny for a historic third consecutive state playoff appearance. Banks County (4-4, 3-2 Region 8-AA) sits in sole possession of fourth place in Region 8-AA and needs only one win in its final two games to make it back to the playoffs. The Leopards have made the postseason each of the last two years and have never made three straight state playoff appearances in school history. The first, and perhaps best, opportunity for that win will come this Friday as they travel to Monticello. The Hurricanes (3-5, 2-3 Region 8-AA) have yet to beat a team with a .500 or better record this season. Following that game, Banks County will host Elbert County in the regular season finale. The third-place Blue Devils (5-3, 3-2 Region 8-AA) appear to be the tougher of the two teams left on the Leopards schedule, sporting a better record and having beaten Monticello 47-8 last Friday. It likely won't matter who Banks County defeats, but two losses would almost certainly keep them out of the postseason. For first-year head coach Jay Reid's team, it will be as if the playoffs start this week.

4. Region 7-4A's final playoff spots are completely up for grabs

The top of Region 7-4A is simple to figure out. Blessed Trinity (8-0, 4-0 Region 7-4A) and Marist (8-1, 5-0 Region 7-4A) will play in Roswell Friday night with the winner capturing the region crown and the loser holding the region's number two seed. The final two playoff spots, however, are a jigsaw puzzle of permutations and scenarios that will have to get sorted out in a short two weeks. Flowery Branch (6-2, 2-2 Region 7-4A) appears to be in the driver's seat for the third seed. The Falcons' only losses this year are to Blessed Trinity and Marist and they already have wins over White County and Chestatee. However, they still must face West Hall and Denmark and have suffered a slew of injuries over their last two slugfests with the region's top teams. White County (2-6, 1-3 Region 7-4A) appeared to be in control of the number four seed going into the final minute of last Friday's game at Denmark, but a missed extra point and a Denmark touchdown pushed the Great Danes (5-4, 2-3 Region 7-4A) past the Warriors, 28-27, into the fourth spot. While the loss greatly hampered White County's playoff hopes, it provided a glimmer of hope to West Hall's. The Spartans (2-6, 1-3 Region 7-4A) appeared to have squandered a golden opportunity to make the postseason when they fell to White County two weeks ago, but Denmark's win has kept them alive, as West Hall owns a tiebreaker over the Danes. Now, Flowery Branch, Denmark, White County, West Hall and even Chestatee (1-7, 0-4 Region 7-4A) are all alive for not only a playoff berth, but as high as a third seed. If you like wild scenarios and incredibly urgent late-season football, Region 7-4A has got a show in store for you.

5. Region 8-A North's title will come down to its final week

Ever since Riverside Military took out Towns County four weeks ago, we have known that the race for the Region 8-A North subregion crown would be a photo finish. Now, we know that photo finish will come in the form of Riverside's game at Commerce this Friday. Despite the Eagles' 17-7 loss to Hebron Christian last week, Riverside (4-4, 2-1 Region 8-A North) can still create a three-way tie for the right to play No. 1-ranked Athens Academy next week in the Region 8-A championship game. The Spartans have already clinched the South subregion championship. To force that tie, Riverside will have to find a way to upset a powerful Commerce team. The Tigers (8-0, 3-0 Region 8-A North) have rolled through the 2018 season so far, with only Hebron Christian (5-3, 2-1 Region 8-A North) being able to come within one possession of them in a 21-18 Commerce win two weeks ago. Commerce will be in no mood to squander a subregion crown that they have appeared to be in the driver's seat for since subregion play began, but Riverside knows that a win would be monumental, not only for the region implications, but for its postseason hopes as well. The Eagles have spent the last several weeks on the fringe of the top 24 in the Class A-Private power ratings, which decide which teams make the state playoffs. While a loss would not mathematically eliminate them, a win would almost assuredly give the Eagles a place in the bracket. Riverside is playing in a number of very important games late in this season, which is what second-year head coach Nick Garrett had to have hoped for after a disappointing 2-8 campaign in 2017. Now they'll get to put themselves to the test against one of north Georgia's blue blood programs, as Commerce appears well on its way to its 22nd consecutive state playoff appearance.