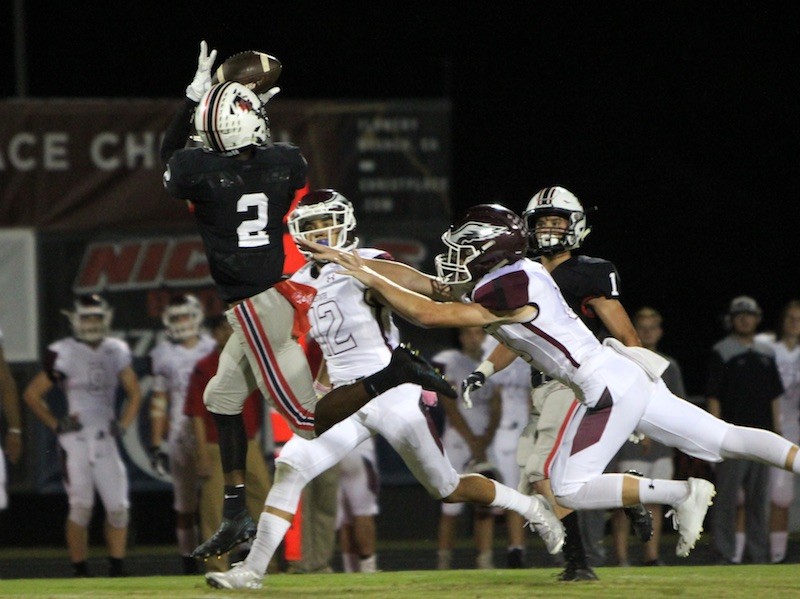 Flowery Branch's Jalin Strown (2) reaches for a pass during the Falcons' win over Chestatee on Friday night. The pass actually ended up being deflected and intercepted.
photo: Reg James
Contact Editor

FLOWERY BRANCH — Despite its reputation as a physical, ground-and-pound offense, Flowery Branch showed it also knows how to blitz opponents through the air on Friday.

Quarterback Elijah Gainey and a trio of Falcons receivers lit up Chestatee early and often en route to a 69-13 win over the War Eagles in Flowery Branch.

Gainey finished the contest 12 of 17 for 333 yards and five touchdowns -- three to DJ Brown and one apiece to Jalin Strown and Connor Lawson -- all scores coming in the first half, as the Branch led 48-0 at the half. Chestatee did wrangle one interception on a deflection in the first quarter, but it only served to slow the Branch's assault.

Brown finished with four receptions for 153 yards and scored all three touchdowns in the third quarter, as the Falcons put the contest out of the reach. Brown's 44-yard TD reception made it 20-0 with 10:41 left in the half, and his 75-yard screen pass for a score signalled the route was on at 34-0 with 5:37 to play before the interval.

The Falcons (6-0, 2-0 Region 7-4A) also rushed for 146 yards, including 84 yards and two touchdowns for Zarian Brawner -- who bounced off three tacklers for a 15-yard touchdown run in the second quarter. But it was the aerial abilities of the Falcons that put the game out of sight, as Strown (5 receptions, 135 yards), Larson and Brown each pulled in touchdown passes under pressure from Chestatee defenders.

Chestatee's Christian Charles still rushed for 116 yards and two scores -- but that was after trailing 62-0 in the third quarter. And the Falcons' defense kept the War Eagles' passing attack under wraps, allowing just 10 completions on 31 attempts for 61 yards.

The Falcons can now look ahead to next week's key showdown with defending Class 4A state champion Blessed Trinity -- but will also want to avoid the penalties that saw the Branch flagged 11 times for 100 yards against Chestatee.