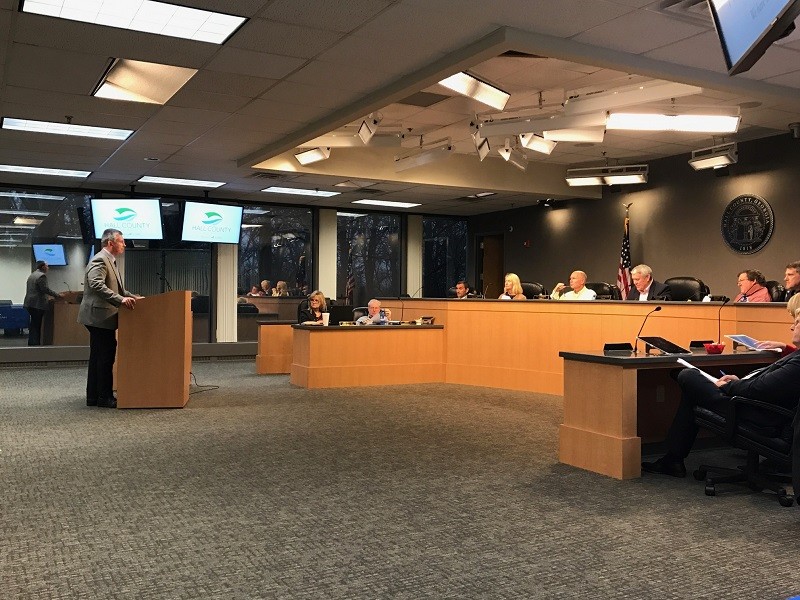 The Hall County Board of Commissioners is set to approve to a pay raise for certified sheriff's deputies in the county later this week.

The vote to place the request on Thursday's consent agenda came after a plea from Sheriff Gerald Couch at Monday's work session. Couch told commissioners the department needs the 2.5% raises because deputies are leaving for other jurisdictions that offer better pay and benefits.

"It is more competitve now than I have ever seen in the 35 years that I've been in law enforcement," Couch told the commission. "When we hire someone in the jail and we later send them to the police academy, we do a lot of investment in that person...and what we're seeing now is that a lot of agencies - once these jailors now become deputy sheriffs and they're certified law enforcement officers - a lot of agencies will start cherry-picking those officers."

Couch said he began discussing pay raises with county administrators once veteran officers who had been with the county for more than five years started leaving in greater numbers. According to a written statement from Couch, 73 department employees, including 37 deputies, left the county in 2017, a 42% increase from the year before.

District One Commissioner Kathy Cooper asked Couch if the raises would bring deputies' salaries to the levels offered by the county's competitors. Couch said Banks County and the city of Gainesville now offer $40,000 salaries thanks to recent raises, while most Hall County deputies will still be just below that mark. He said, however, that some overnight shift deputies could get pay increases to over $40,000.

Couch also said that there could be more steps taken to retain officers in the coming year.

"My plan is to from now through the presentation of that (Fiscal Year 2019) budget to get with the county administration, look at other agencies and what they offer - which we already are and have been - and to see how we can remain competitive in those areas," Couch said.

The raises, with final approval, would go into effect following the February 18 pay period.