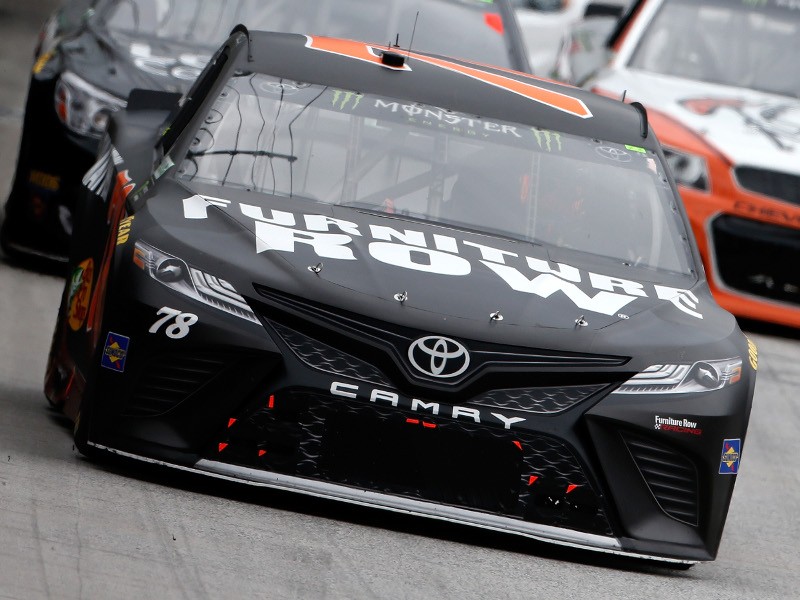 RICHMOND, Va. – Naturally enough, Dale Earnhardt, Jr.’s bombshell announcement that he will retire from Monster Energy NASCAR Cup Series racing at the end of the year shifted focus to the 20-somethings who might take the reigns of the sport.

But that doesn’t mean we should forget the veterans who will still be around.

“I’m only 36,” Martin Truex, Jr. said plaintively before leading Friday’s opening practice at Richmond International Raceway with a lap at 124.178 mph. “I don’t feel old, so that’s good. That’s the most important part I guess, but, yeah, there’s definitely a lot of young guys coming up.

“But I feel like I’ve got my best years ahead of me. They can keep talking about who’s retiring and who’s going to fill their shoes, and hopefully I’ll be here to take a bunch of checkered flags home.”

Not that Truex minds staying in the background and winning races for his No. 78 Furniture Row Racing team, while relative newcomers such as Kyle Larson, Chase Elliott and Ryan Blaney get the lion’s share of attention.

“I can tell you I don’t mind being that guy,” Truex said of his low profile.

Suarez Has A Simple Answer To A Driver’s Popularity

Daniel Suarez, a Sunoco rookie in the Monster Energy NASCAR Cup Series, doesn’t have the same level of fan support that has accrued to Dale Earnhardt, Jr.—no one else does—but the Mexican driver believes he knows how to win over new boosters.

“When every single driver can go out there and be themselves, I think that’s very cool, and the fans like that. You know, so far, it’s what I’ve been doing, and I think it’s the right thing to do.”

That not to say that he or any other driver will rival Earnhardt’s popularity.

“Dale has been more than a role model for the sport, and it’s great what he has done,” Suarez said. “Like I said on Twitter last week, I’m kind of new into the sport, but I have learned a lot from him in and out of the racetrack.

“A great guy, a great driver, and I’m looking forward to keep racing with him this year and to keep hanging out with him, as well, in the future.”

To hear NASCAR Xfinity Series driver Elliott Sadler tell it, the addition of stages and the modification of the Dash 4 Cash format have had a profound effect on race strategy, because drivers and crews have to take both parts of the equation into account.

The top 10 drivers in each stage earn points, with the winner of the stage getting an additional playoff point that will carry through to the season finale at Homestead-Miami Speedway. In addition, the top two Xfinity regulars in each stage earn eligibility for the $100,000 Dash 4 Cash bonus, with the highest finisher among them at the checkered flag winning the money.

“We’ve actually changed our strategy a lot this year, based on the stage racing,” Sadler said. “We didn’t really know how much we’d change it until we actually got to Daytona and saw how different everybody races, getting close to the ends of the stages.

“That’s what’s neat about this Dash 4 cash race (Saturday’s ToyotaCare 250 at Richmond). We’ve actually got a couple things going on. Yes, we’re trying to get qualified for the Dash 4 Cash, but we’re also trying to get bonus points for the stages, too.”

All that adds a layer of complexity to the decision-making process.

“We’re just kind of playing it by ear—what decision can we make to best benefit us? It’s definitely changed the way we’re looking at the races, not just from the Dash 4 Cash side, but also the stage racing side. There’s a lot of points to be made, and now that you know you’re going to be saved by a caution, you can be more aggressive.

“We can be more aggressive on pit road. We can take more chances, because we know there’s a caution coming out to save us.”