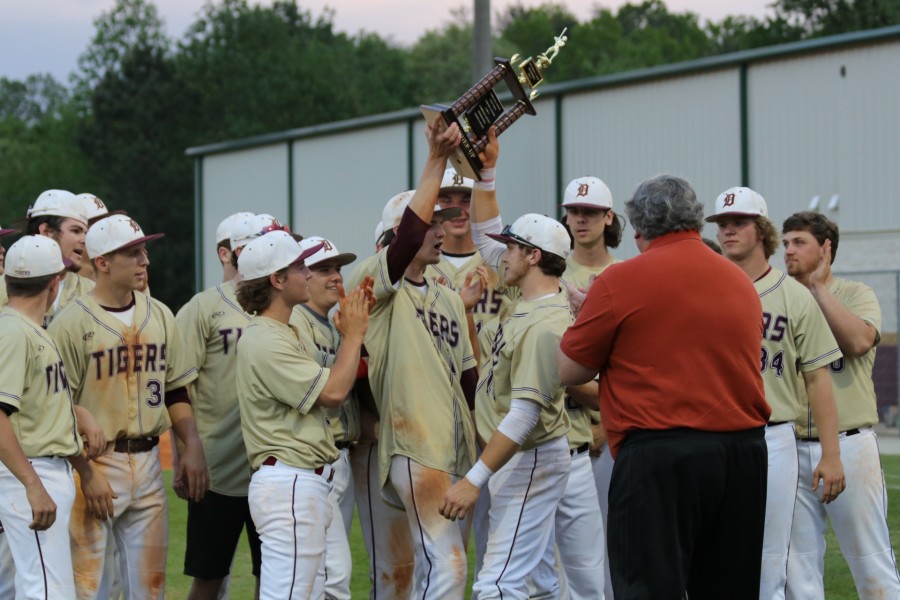 Members of the Dawson County baseball team lift the runner-up trophy after knocking off North Hall 7-2 on Friday in the regular season finale and battle second place in Region 7-AAA. Both teams will be back in action next week when the Class AAA playoffs begin.
photo: Seth Chapman

DAWSONVILLE — Dawson County baseball coach Dwayne Sapp knows his Tigers will ultimately live-and-die with a balanced offense that is averaging 7.7 runs a game.

But no playoff run is possible without solid pitching. And the Dawson County staff has quietly put together an impressive season under the shadow of the offensive thumpers with seven shutouts and 12 games of allowing three runs or less.

On Friday, the Tigers were a dropped fly ball from their eighth shutout in the most important game of the season as freshman Hudson Sapp and senior Noah Davis combined for a four-hitter to lead them to a 7-2 win over North Hall at Tiger Field in a showdown for the second place in Region 7-AAA. Both North Hall runs were unearned.

“Our hitting has been there all year. The key for us the last month has been our pitching,” Sapp said. “Noah came in and really gave us a lift. North Hall has a lot of tradition so to be able to take two from them is big for our program.”

“First of all you have to tip your cap to Dawson County. They played a great series, were tough, and deserved it,” Mongero said. “But the ball just has not been rolling our way of late. We’re still right there. We’re not playing bad but we could use a break. Hopefully we’ll be ready to turn the corner when the playoffs start.”

The small dimensions of Tiger Field are always a factor and both starters ran into trouble in the first inning. Sapp hit two batters following a Taber Mongero single to open the game as North Hall loaded the bases. But Sapp got Drew Hubbard to lineout to left to end the inning without giving up a run.

The Tigers, however, did not let Mongero, who started for the Trojans, off the hook. Mongero, a Gardner Webb-signee at shortstop, walked Palmer Sapp on four pitches to begin the bottom of the first and Hudson Sapp singled. After a Kolton Brumbelow sacrifice moved both runners up, Conner Bearden ripped a single to center driving in two runs for  2-0 lead.

Sapp again loaded the bases in the second on an error, a hit batter, and a walk. Reese Olson tied the game for North Hall with a two-run single but Austin Adams was gunned down at third on the play to end the inning.

The Dawson County pitching took over from there. Sapp and Davis allowed just four baserunners over the final five innings.

Sapp walked one in the third but got help from his defense with an inning-ending double play. Sapp went three innings allowing the two unearned runs on two hits.

The Tigers brought in Gardner Webb-signee Davis to start the fourth and he retired the first three North Hall batters he faced. In the fifth Mongero singled to lead off and courtesy runner John Mark Montgomery moved around to third on a wild pitch and stolen base. But Davis got Olson to fly out to left and Caleb Wiley grounded out leaving Montgomery at third. He retired seven of the final eight North Hall hitters.

Mongero settled down after the Bearden single in the first retiring 11 of the next 13 batters, including five strikeouts, through the fourth inning. But he ran into trouble again in the fifth. The first four batters reached on a pair of singles and an error that allowed Jacob Gloeckner to score for a 3-2 lead with no outs yet in the inning. Brumbelow knocked out Mongero  with a bunt single to load the bases.

North Hall brought in Olson to take over for Mongero, who went four-plus innings allowing six runs on six hits, though he did strike out five. Bearden greeted Olson with a two-run single through a drawn-in infield, and after a strikeout of Austin Young, Brumbelow came in on a sacrifice fly by Nate Sorrells to push the lead to 6-2 going to the sixth.

With 7-AAA matching up with Region 5-AAA in the opening round, both Sapp and Mongero said there won’t be any time for a letdown. Region 5-AAA houses defending Class AAA champion Westminster, which currently sits in third place behind Redan and Pace Academy.

“It’ going to be four really good series,” Sap said. “I expect that no matter which teams win that two or three teams from the two regions will be in the Elite 8.”

“We played a very tough non-region schedule so we’ve seen some great teams already,” Mongero said. “I think we’ll be ready and I expect (7-AAA) to be able to compete. But there won’t be any easy series.”