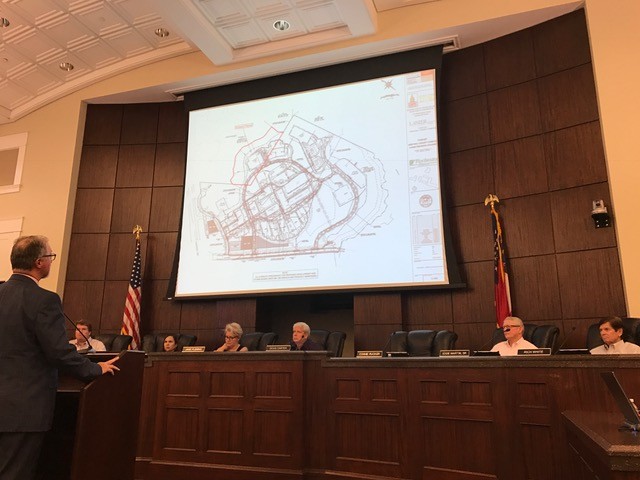 Lanier Technical College President Dr. Ray Perren (left) presents the school's plans for an eight-acre tract of land to the Gainesville Planning and Appeals Board at its Thursday meeting (Photo by Caleb Hutchins)
Contact Editor

GAINESVILLE --The Gainesville Planning and Appeals Board has approved a request for annexation of just over eight acres of Hall County land that will be part of the new Lanier Technical College campus on the northeast edge of the city.

Brian Rochester, Executive Vice President of Rochester and Associates, the engineering firm working on the campus, said the vast majority of the campus' property lies within the city of Gainesville; however, an additional tract of land outside the city was donated to the college and is now being incorporated into its plans. Rochester said the school already has a proposed use for the property.

"It just worked out beautifully to be sitting up on a knoll and overlooking the (Ramsey-Fraser) Lake, and a great place for a conference center," Rochester said.

The board unanimously recommended approval of the annexation at its Thursday meeting. Rochester said the move made sense in order to bring the entire campus into one jurisdiction, especially for emergency situations.

He added that Hall County emergency officials agreed with the request for annexation.

"They were very understanding and agreeing that this was the right way to handle this, so that there was never any confusion," Rochester said.

The annexation request will now go before the Gainesville City Council for a final vote at its November 7 meeting. The campus is off of Howard Road just off of Highway 365, and it is currently scheduled to be open for classes in January of 2019.

Rochester said the conference center that will sit on the property in question is already under construction. The land also encompasses part of the newly- built Lanier Tech Way and would bring it entirely into Gainesville as well.