Sheriff's K-9 Rex remembered as 'one of a kind' 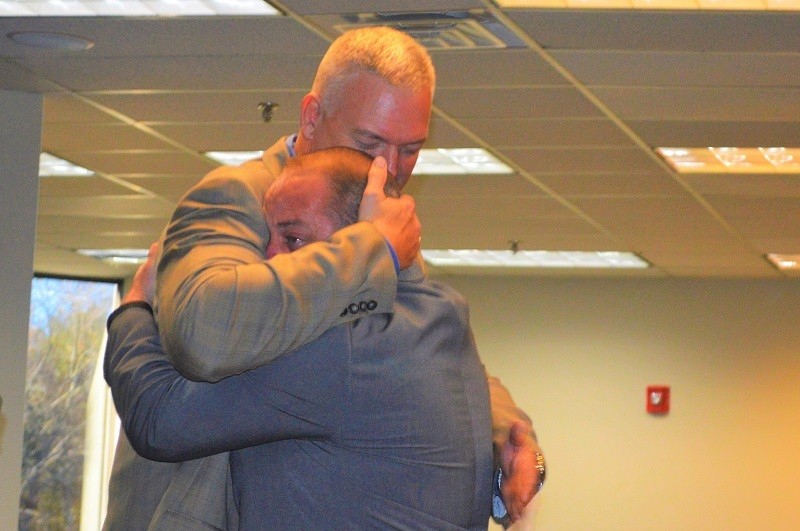 Habersham County Sheriff Joey Terrell gives a hug of comfort to Jeff Sosebee during Tuesday afternoon's memorial service. Sosebee was the handler for K-9 Rex in both Hall and Habersham counties.
Rob Moore 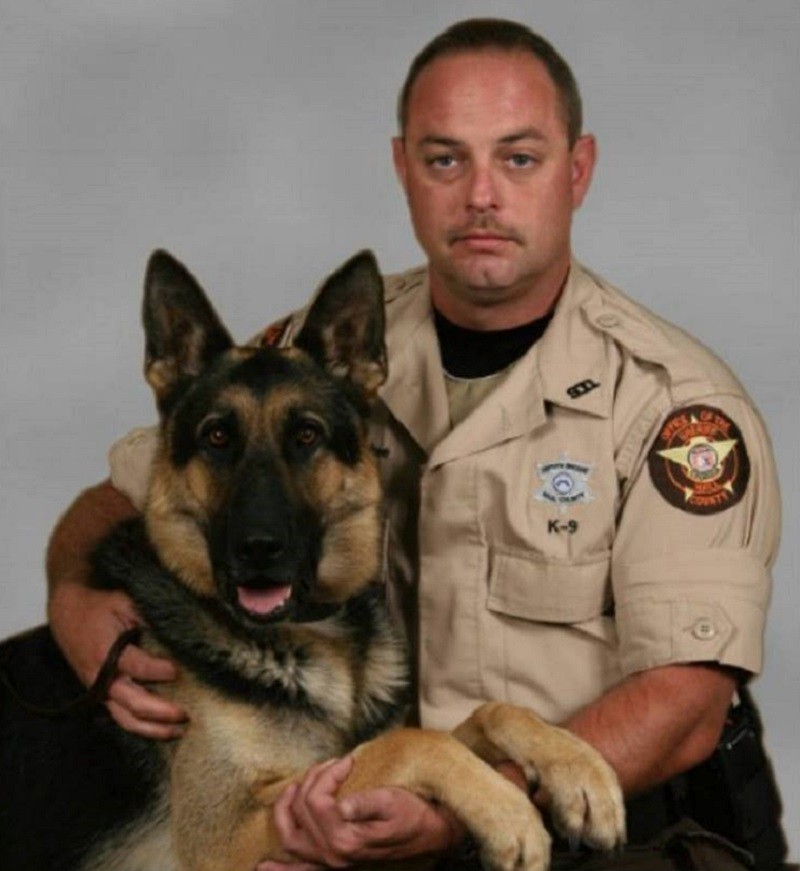 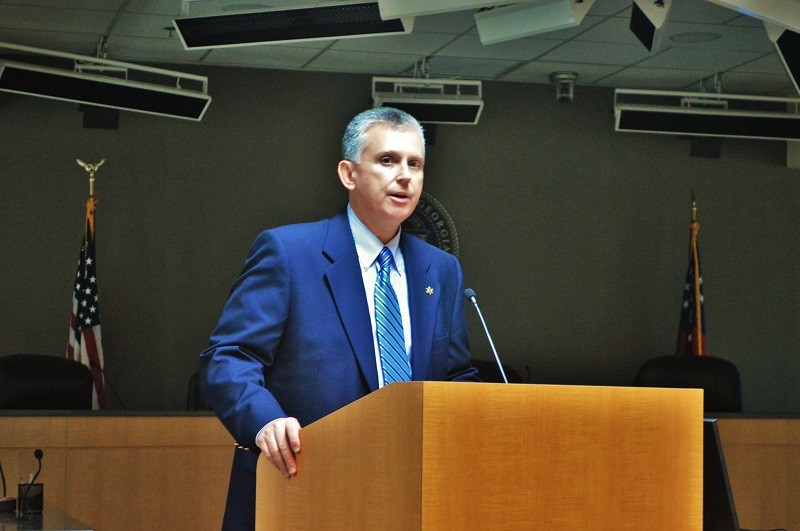 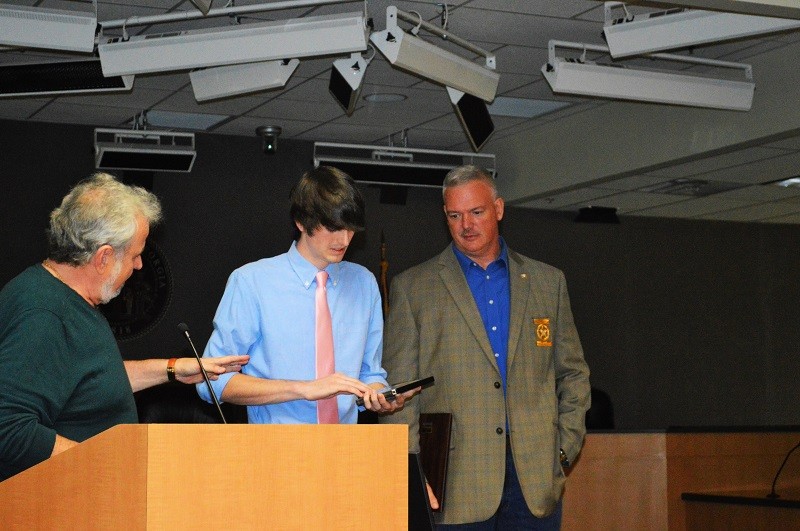 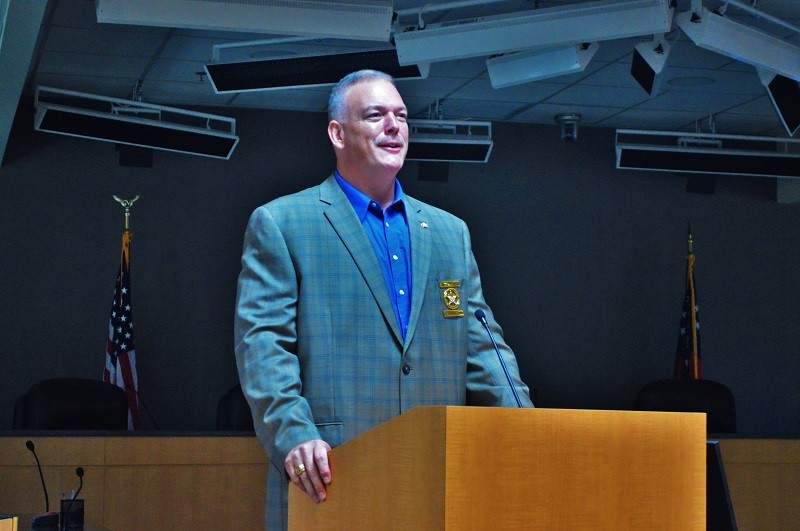 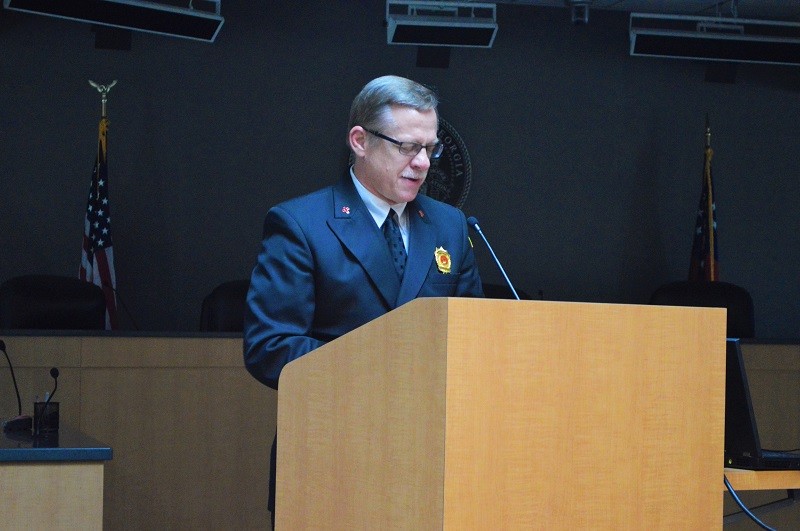 GAINESVILLE - Some people might say a dog is just that, but a group of about 100 people gathered in the Hall County Government Center in Gainesville to remember area law enforcement K-9 Rex as much more.

"He was put into service with the Hall County Sheriff's Office in April of 2006 with his patrol K-9 handler, Deputy Jeff Sosebee," Couch said. "Jeff served this community very, very well and he also served the citizens of Habersham County, too."

"[Rex] had a very interesting career - a phenomenal career,' Couch said. "He had 206 captures, which is quite a feat in itself. He responded to tracking calls as far north as Cherokee County, N.C., and as far south as Oglethorpe County, so he was an asset not only to this community but many others.

"He was given an honorary status with the Boy Scouts of America, and he visited numerous schools, retirement homes, civic organizations and of course fire stations along the way," Couch said.

"The bond that is established between a K-9 and a handler goes beyond that working relationship," Couch said. "They become a member of the family - and that's exactly what Rex was. Deputy Jeff Sosebee and Rex were much more than a handler and a work dog. They were partners, they were companions, they were friends and yes, they were family."

Habersham County Sheriff Joey Terrell, who graduated from high school with Sosebee, shared stories about Rex and Sosebee that brought laughter from the crowd. He noted the two were synonymous.

"You can't talk about Rex without talking about Jeff," Terrell said.

Terrell, who said Rex joined his department in 2009, referred to him as the "star of our K-9 program" when Sosebee helped rebuild it, adding the county's school students loved to have Rex visit and conduct demonstrations. He added Rex was unique in that he could be serious about work then immediately visit with children and allow them to pet and hug him.

Terrell shared funny times and said Rex was a joy to be around.

James "Moby" Carney, a close friend of Sosebee, mentioned the song, "If Dogs Have a Heaven, There's One Thing I Know", saying, "Well, Rex has a wonderful home."

"Everybody in this room loved Rex, and because of that we put up with you," Carney told Sosebee jokingly.

Carney presented Sosebee's son Blake with a DVD containing original photos of Rex, while Terrell presented him with a plaque.

Amazing Grace, played by a bagpiper, echoed through the second floor of the building and trailed off before Hall County Fire Services Chaplain Mike Taylor delivered the Benediction.