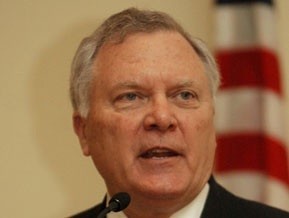 The governor spoke at a news conference at he State Capitol late Tuesday night.

Deal also said that state and local officials will try to rescue those stranded along highways that are at a standstill. Normal 30-minute commutes have turned into hourslong odysseys for thousands.

A winter storm that would probably be no big deal in the North all but paralyzed the Deep South, bringing snow, ice and teeth-chattering cold, with temperatures in the teens in some places.

Deal joined other state officials and Atlanta officials in urging people to stay off the roads. Deal said they are not expected to be in much better shape Wednesday morning and noted that state offices will be closed Wednesday.

The mad rush began at the first sight of snow: Across the Atlanta area, schools let out early and commuters left for home after lunch, instantly creating gridlock so severe that security guards and doormen took to the streets to direct cars amid a cacophony of blaring horns.

Mary McEneaney usually has a 20- to 40-minute drive from her fundraising job at Georgia Tech in Midtown Atlanta to her home about five miles away. On Tuesday, it took her 40 minutes to move just three blocks. She made it home three hours later.

"I had to stop and go to the bathroom at the hotel," she said. "At that rate I knew I wasn't going to make it until I got home."

Hers was a common tale for people who seemed to stream all at once from office buildings, schools and other businesses, rushing to make it home in the rare snow that turned city streets and six-lane highways alike into parking lots.

In Atlanta, the gridlock was so bad, a baby girl was delivered alongside Interstate 285, said Capt. Steve Rose, a spokesman for Sandy Springs police in suburban north Atlanta. He said an officer made it to the mother and her husband in time to help with the delivery, which he described as "flawless." There were no complications and the family was taken to a hospital.

What would have been a 45-minute commute on a typical day in Atlanta turned into a more-than-five-hour journey for Lisa Webster, who is five months pregnant and was traveling with her screaming 16-month-old son.

Webster spent about four hours crawling in her car along Interstate 75 northbound from Midtown Atlanta to Marietta - "I think we were going maybe 2 miles per hour," she said - before deciding to park at a local grocery store and walk. Hoofing it the remaining half-mile home turned out to be the highlight of her commute.

"We were out, we were stretching our legs we were moving faster than all of the stopped cars," she said. "I could see an end in sight."

At Barber Middle School in Acworth,, principal Lisa Williams said 972 students had made it home, but five were still left as of 9:40 p.m. as their parents struggled through the gridlock to get them.

"We are in the front office playing bingo and eating snacks," she said. "We're just enjoying the night until they get here."

About 40 teachers and other school employees planned to spend the night rather than risk the dangerous ride home, Williams said.

Snow-covered Atlanta's statues of civil rights heroes, and snowplows that rarely leave the garage rolled out onto the city's streets. They didn't seem to do much good. Officials said many of the trucks couldn't move through clogged roads. And for commuters unaccustomed to snow-slicked roads, driving was nearly impossible.

In Atlanta, cars were packed bumper-to-bumper, green lights came and went - and traffic didn't move an inch, McEneaney said. She decided to take side streets and, when necessary, shifted into lower gear because of the slippery conditions.

"As long as you went slowly, the roads were OK," she said.

Webster was thankful that she and her son had food and snacks stored in the car, and said she'll think twice before griping over another 45-minute commute.

"I won't be angry ever again," she said, "Today was definitely one for the books."

In Savannah, residents braced for a winter whiplash, barely 24 hours after the coastal city hit a T-shirt-friendly 73 degrees. Less than a quarter-inch of ice and up to an inch of snow were possible in a city that has seen very little snow on its manicured squares in the past 25 years.

From Baked Alaska to a guy with horns: notable riot arrests
More than 125 people have been arrested so far on charges related to the violent insurrection at the U.S. Capitol, where a Capitol police officer and four others were killed
By The Associated Press

March for Life asks its supporters to stay home this year
Organizers of the March for Life are asking their supporters nationwide not to gather in Washington this year because of the COVID-19 pandemic and political unrest
By The Associated Press
Privacy | User Agreement | Contact | Advertise With Us
2021 © Jacobs Media Corporation. All rights reserved. EEO Report. Website by Full Media
Login / My Access
close
Search