Five things: What we learned from Week 3 of high school football 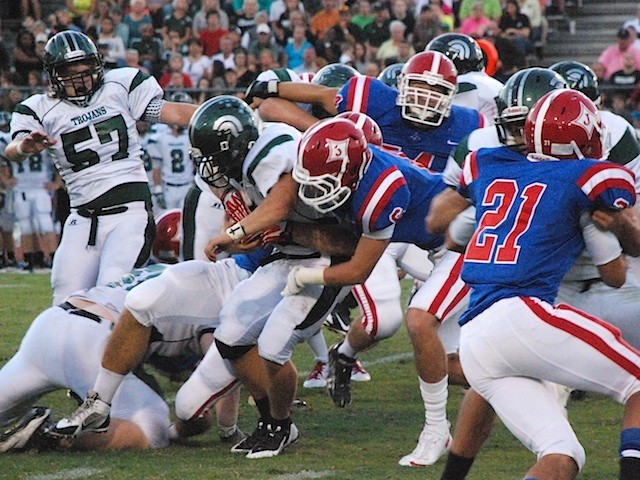 It wasn't so much that North Hall and Jefferson's defenses aren't good, it was more a case of the Trojans' and Dragons' offenses being that good that resulted in a 41-34 shootout between the two foes on Friday at Jefferson's Memorial Stadium. The most fun part about it was that they were two totally different styles of attack, and yet each offense is geared so perfectly to the strength of each team. North Hall's power wishbone will create holes in just about any defensive front, and the Trojans have the quickness to exploit those openings behind quarterback Andrew Smith and running backs Zac Little, Brannon Dyer and Destin Bennett (among others). Meanwhile, Jefferson's spread/I-formation attack can go for power with the dynamo Tristen Jackson (have fun tackling that guy) or drop back and shred defensive secondaries via the arm of Evan Shirreffs and a group of dangerous receivers. ... We're not going to say that no defense is safe against these two offenses, but there are few in northeast Georgia that would be able to slow one, let alone both. And Region 7-AAA and Region 8-AA will have their hands full against the wishbone and spread, respectively. And both teams will have a shot at both league's because of those attacks.


2. Flowery Branch has a running back -- or two

The Falcons thought they had a budding star in freshman running back Jeremiah Goss. But on Friday, and out of necessity, they found another rising star. Jemon Randolph was called into action early when Goss went down with an injury and -- with his team needing a win in the worst way -- Randolph responded emphatically, rushing for 201 yards and two touchdowns in a 39-25 defeat of Cedar Shoals. A senior, Randolph is listed as defensive back on Flowery Branch's opening day roster, but it's clear that his final varsity campaign at the Branch belongs in the offensive backfield. His performance on Friday helped the Falcons buck an 0-2 start, and set the bar pretty high for what's to come. The Falcons' offense -- while quarterback driven -- has relied on a standout running back in almost all of its most successful seasons to help balance things and keep defenses on their heels. Randolph took a big step toward being the next standout back on Friday, and Flowery Branch will be looking for more from the senior in the weeks to come.


3. Hayden Sphire is the real deal

With all the big-time recruits and athletes dotting the line-up of North Gwinnett's roster, you may not have heard/read too much about the Bulldogs' quarterback in the preseason. That's all changing now. We don't get south of Buford too often, so you'll have to forgive us if we're a little slow on the uptake. But Sphire impressed the heck out of us in last week's win over Norcross and showed us that he is ready to lead North Gwinnett into rarified air. As a coach's son, it is easy to guess that Sphire would have an intimate knowledge of his father's spread offense. But the senior is far more than a "game-manager," as he showed (again) in Friday's 36-17 defeat of Norcross. Sphire took some time to find his rhythm against a fired up Blue Devils squad, but once he found his range -- and receiver Nate Brown -- he proved dominant, completing 20 of 30 passes for 297 yards and four touchdowns (all to Brown).

We said at the start of this season that northeast Georgia may now have its deepest and most explosive talent base for football ever, and Friday night's stats only helped enforce that notion -- especially for offenses. We already knew about Deshaun Watson's greatness, and he only helped enforce that, as the Gainesville QB went over 10,000 career passing yards in a demolition of Winder-Barrow. But plenty of other players put up huge nights. Just look at this list of excellence -- and notice the yards per play average...

And that's just a handful of some of the bigger performers. Dawson County's Max Muldoon also booted a game-winning 29-yard field goal as time expired to beat Forsyth Central. Meanwhile, Statham's 38 yards per carry is unreal, and we may be seeing the kind of season we're unlikely to see again soon as it pertains to northeast Georgia football as a whole.

Anyone who has followed football long enough knows that most programs/units take their biggest step in year two under a new coach or system. Rabun County looks to be making that progression nicely so far under Lee Shaw. The Wildcats' offense, in particular, is showing big strides in the spread option attack that Shaw used to such devastating effect at Flowery Branch. Just look at the numbers. Through two games, Rabun has already score 110 points, versus 65 at this point a year ago. The Wildcats have a senior quarterback in Wes Holcombe that is enjoying the options available to him in spread, along with one of the state's most explosive players in Charlie Woerner. Keep an eye on Rabun County this week. The Wildcats will face Commerce, who dealt them an 18-17 loss in 2012. Win that, and Rabun should be favored in every game until a huge showdown at Jefferson on Oct. 11.

Boys basketball: Warriors clinch playoff spot; Commerce rallies for 8-A win
The White County boys clinched a state playoff berth with a 60-44 win over West Hall on Friday in Region 7-3A action at the West Hall gym...
Updated
By AccessWDUN Staff 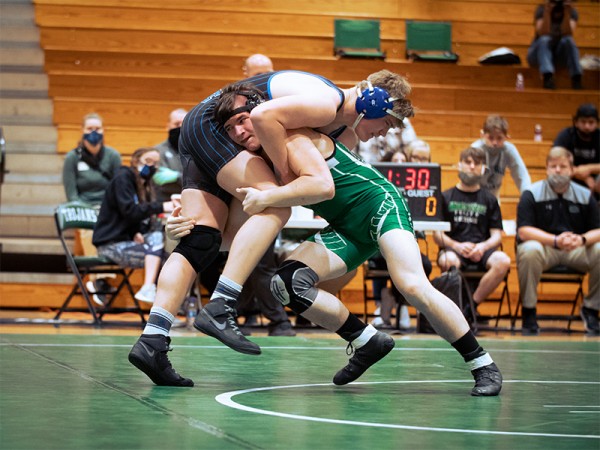 Wrestling: Seven area teams looking for state titles
The Georgia High School Association 2021 State Duals wrestling tournament will be like none other. For the first time ever the GHSA, mainly due to precautions from coronavirus, will stage the tournament at seven different locations instead of the Macon Coliseum...
By Jeff Hart