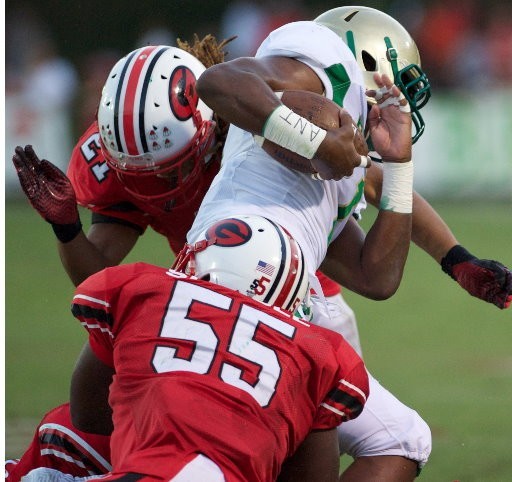 Gainesville defenders come to grips with a Buford ball carrier in the Wolves win on Friday in Gainesville. / photo: David Weikel

Gainesville vs Buford from WDUN TV on Vimeo.

In a matchup between 2012 state champions Friday night, the defending Class AAA champion Wolves chewed up defending Class AAAAA champ Gainesville 38-14 at City Park Stadium in a performance that is sure to demoralize the rest of Class AAA.

The game was broadcast live on GPB TV and even had a Clemson, S.C. radio station in town to follow the exploits of Clemson-commit Deshaun Watson of Gainesville.

Buford pounded out 352 yards on the ground to keep an explosive Gainesville offense off the field. When the Elephants did have the ball, the Buford defense never let Watson, the nation's top-rated quarterback, get into a rhythm.

"They are an explosive team and you can't let them get going," Buford coach Jess Simpson said. "They had like 28 points in four minutes against West Forsyth (last week) and we sure didn't want to have to get into a situation where we had to outscore them. To me the offensive line was the story. They did a great job against their defense."

It was a rare matchup of defending state champs and a rematch of last year's 19-15 thriller won by Gainesville at Tom Riden Stadium in Buford.

Simpson said it was a game they had circled on their schedule for several reasons.

"When you have two state champs and two communities this close to each other that love football, it always something special," Simpson said. "We wanted to get through the second week of the schedule and build toward the region and this is the kind of game and team you want to do that against. But, we also had a bad taste in our mouth from last year's game and getting a little measure of revenge never hurts."

The Wolves wasted little time in showing off their versatile offense. Quarterback Taylor Mitchell connected with Isaac Nauta for a 22-yard gain on the opening play and then five consecutive running plays got them down to the Gainesville 11.

Mitchell would cap off the impressive drive with an 11-yard TD pass to Cameron Poole for a 7-0 lead after a Matthew Bonadies extra point just over three minutes into the game.

The Elephants looked poised to answer with a scoring drive of their own moving quickly to the Buford 38. But after Watson connected with Chastin Newman, the Wolves ripped the ball from Newman and recovered at their own 23.

It was the first of two Gainesville turnovers and set the tone for the rest of the night.

"We really didn't play that well but Buford had a lot to do with that," Gainesville coach Bruce Miller said. "We just never found our rhythm. They are big up front and it was a tough matchup for us. This doesn't hurt us for the playoffs but it does hurt the pride a little."

After recovering the fumble, Buford then chewed up more than five minutes on an 11-play drive that ended with a Bonides 47-yard field goal with 1:30 left in the first quarter. The Buford defense would force a quick three-and-out of Gainesville on the Elephants' next possession, capped with their second sack of Watson.

A bad punt from Watson would give Buford a short field and the Wolves needed just six plays to cap a 33-yard drive with Zavior Hoxie dragging three Gainesville defenders into the end zone on a 3-yard scoring run for a stunning 17-0 lead less than three minutes into the second quarter.

"They jumped on us pretty quick and we just couldn't get back in it the way we hoped," Miller said. "We really didn't do much of anything right tonight."

The Elephants offense finally was able to get things going on their next drive, however. Watson was 5-of-6, including connecting with Jay Gaudlock on a beautiful throw and catch for 26 yards down to the Buford 40. The two would hook-up again six plays later on a 7-yard TD pass, with Gaudlock diving over two Buford defenders to get into the corner of the end zone. A Gage Turner extra point cut the lead to 17-7 with 7:04 left.

Gainesville had two other chances to cut into the lead but Watson was picked off inside the Buford 20 and after the defense forced the Wolves to punt, the Elephants drove to the Buford 39 but the drive stalled with 1:17 left in the half.

The Wolves piled up 191 yards on the ground in the first half but it was the passing of Mitchell (3-for-3, 49 yards, 1 TD) that kept the Gainesville defense off-balance just enough to help open holes for the running game.

Watson started strong completing his first eight passes but finished 12-of-19 in the first half for 127 yards and one touchdown and one interception. He was sacked three times in the first half.

The Wolves used their punishing ground attack to take control in the second half. Thomas Wilson scored on a pair of short runs while the Buford defense forced two more punts and stopped the Elephants twice on downs as they built a 38-7 lead early in the fourth quarter.

Gainesville got its final score in the waning moments when backup quarterback Mickey Gonzalez connected with Josh Holderfield on a 25-yard touchdown pass with 1:35 left in the game.

Watson needed 257 yards to become Georgia's first-ever 10,000-yard passer. He'll have to wait until next week. The senior finished with 193 yards on 22-of-42 passing. He added 69 yards rushing on 18 carries, mainly right into the teeth of the Buford defense.

The Wolves wore down the Gainesville defense with a bevy of running backs. Thomas paced 12 different ball-carriers with 124 yards on 10 carries.

NOTES:The Elephants are now just 4-4 in their last eight home games. . . Buford is 7-1 in its last eight road games. The Wolves are now 3-0 all-time at City Park Stadium. . . 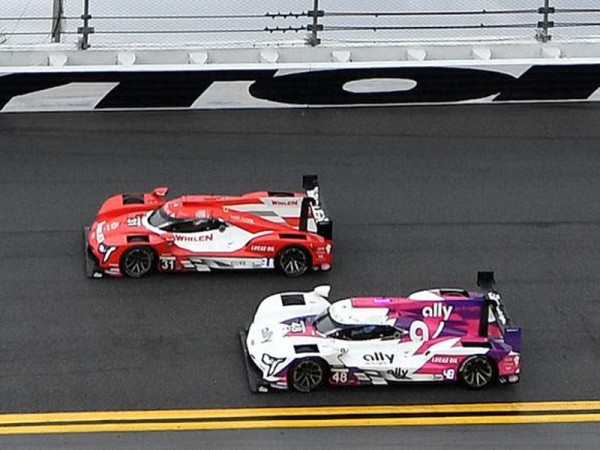