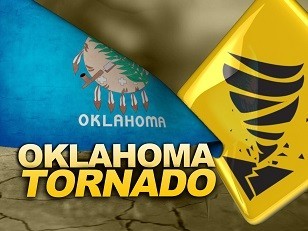 Contact Editor
MOORE, Okla. - Glenn Lewis looks out at a pile of twisted metal, broken wood, smashed vehicles and torn school books. This is what is left of one of the two schools in his Oklahoma town that were obliterated by a massive tornado that killed seven children in the building.

"This was ground zero," the longtime mayor of Moore said, viewing the mounds of rubble that were once Plaza Towers Elementary School. "This is hallowed ground."

In his nearly 20 years as mayor of this Oklahoma City suburb, Lewis has already rebuilt his town twice, grappling with the aftermath of tornadoes so enormous the probability they strike is barely 2 percent. Yet Moore has been slammed by EF5 tornadoes - the largest on the rating scale - twice.

The first came in May 1999, when 36 people were killed. The second hit last week, killing 24 people.

"We know how to do this," Lewis said as he viewed the school's damage for the first time since the May 20 storm. "Because unfortunately, we've done it before."

Lewis has been elected eight times as a nonpartisan in this city of 60,000 people that, aside from its tornado tragedies, may be best known as the home of country singer Toby Keith.

The mayor recalled with a laugh how years ago, when at a meeting of the Council of Mayors, he was given a table with 12 seats, one for him and his "staff." He sat alone because, he noted, "I have no staff." But the organization allowed him to befriend one of his mentors, former Chicago Mayor Richard Daley, who Lewis said taught him some of the ins and outs of getting things done - advice that has proven useful as he steers his town through repeated disasters.

Looking out the window as he recently rode into a field of debris, he noted the smells: natural gas, insulation, rotting wood and food. He knows these smells. He has seen the twisted metal, the smashed vehicles, the planks of wood embedded in car doors.

This time, though, there are the school books torn to shreds and scattered clear across the interstates.

And the dead children.

He wondered out loud why no one died at the other school that was destroyed, Briarwood, yet seven children at Plaza Towers were killed by a wall that collapsed.

"You just look at it and you say, `Is there anything you could have done better?' " he said.

Moore, a part-time mayor, is a jeweler by trade. His warehouse and manufacturing shop were destroyed by the tornado, losses he estimated at more than $1.5 million.

"I know what these people are going through. I lost stuff, too," he said, looking around at the demolished homes surrounding the schools.

"But it's just stuff," he said, turning again to the ruins of the school. "These people lost family members."

Moore has been his family's home since 1962. It is here that he and his wife, Pam, raised their daughter, a 29-year-old who now works for the federal government in Washington. This is where the 57-year-old came after graduating from the University of Oklahoma and the University of Central Oklahoma.

Today, his round, jovial face and quick smile are showing the exhaustion and stress of facing the death and destruction before him, and the cleanup ahead. He noted that his wife, a 4th grade school teacher, knows many of the teachers at the two schools that took a direct hit, saying she was devastated.

Yet he plows on, giving interviews to the national media, meeting state and federal officials to arrange aid for his community, contracting with companies to ensure that debris is quickly removed and working with local, state and federal law enforcement to reopen roads.

Through it, he finds time for the little things. He goes home to try to help his neighbors. In the morning, he swings by McDonald's to buy breakfast biscuits for the troopers manning the checkpoints. On one morning, after McDonald's employees complained the troopers' blockade was preventing customers from getting in, he gently convinced the troopers to move their checkpoint.

He's also trying to make sure the owners of the movie theater, which was damaged in the storm, have access so they can quickly repair the facility. Movies, he figures, could offer a much-needed escape for residents dealing with the stress of starting from scratch.

"We want there to be a sense of normalcy," he said.
© Copyright 2020 AccessWDUN.com
All rights reserved. This material may not be published, broadcast, rewritten, or redistributed without permission.