Arias sentencing postponed until next week 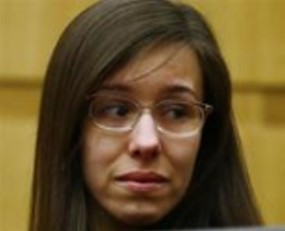 Contact Editor
PHOENIX -- The next phase of the Jodi Arias murder trial was postponed Thursday and will continue next week.

Court officials didn't provide a reason for the delay. The trial will resume Wednesday.

The jury was scheduled to return to the courtroom to decide whether Arias should be eligible for the death penalty for killing her one-time boyfriend on June 4, 2008.

The jury convicted Arias on Wednesday of first-degree murder in Travis Alexander's slaying at his suburban Phoenix home.

Despite Arias' wish that she get death, the decision is only up to a jury at this point. Arias could choose not to testify at the penalty phase and not appeal her conviction if she were to get death, but such scenarios are rare and still take years to play out.

The sheer brutality of the attack and previous testimony from the Maricopa County medical examiner that Alexander did not die a quick death will be at the heart of the prosecution's argument that Jodi should receive the ultimate punishment for her crime.

Alexander was stabbed and slashed nearly 30 times, shot in the forehead and had his throat slit from ear to ear, leaving the motivational speaker and businessman nearly decapitated. Friends found his decomposing body in his shower about five days later.

Arias spoke out about the verdict minutes after her conviction Wednesday, telling a TV station that she would "prefer to die sooner than later."

"Longevity runs in my family, and I don't want to spend the rest of my natural life in one place," a tearful Arias told Fox affiliate KSAZ. "I believe death is the ultimate freedom and I'd rather have my freedom as soon as I can get it."

Arias, 32, fought back tears as a court clerk read aloud the highly anticipated verdict after a four-month trial in which the jury heard 18 days of testimony from the defendant, saw a series of gruesome crime scene photos and heard a raunchy phone sex chat between Arias recorded with Alexander just weeks before he died.

The next portion of the trial is called the "aggravation phase," and it will focus on whether the jury believes the crime was committed in an especially cruel, heinous and depraved manner. If jurors find the aggravators exist, the next step will be the penalty phase during which the panel will recommend either life in prison or death. The process could take several more weeks to wrap up.

The trial quickly became an Internet sensation and transformed Arias from a little-known waitress to a morbid curiosity and a star of a real-life true-crime drama that the public followed incessantly. The presence of cameras in the courtroom, the advance of Internet streaming video and social media, the salacious details of the case, and the attention it got on cable networks like HLN gave the trial the feel of a celebrity proceeding.

The jury heard all about the stormy relationship between Alexander and Arias after they met at a 2006 conference in Las Vegas and he persuaded her to convert to Mormonism. They began dating but broke up five months later, at which point prosecutors said she began stalking him and became increasingly obsessed with Alexander.

The 30-year-old victim was a rising star at a legal services company called Prepaid Legal, where he gave rousing motivational speeches to colleagues and was a beloved co-worker to people across the organization.

Arias sought to portray him as an abusive sexual deviant in her trial, hoping that the jury would buy her claims that she killed him in self-defense after being unable to take the abuse anymore. She claimed he attacked her and forced her to fight for her life. Prosecutors said she killed out of jealous rage after Alexander wanted to end their affair and planned to take a trip to Mexico with another woman.

Alexander's family members wept and hugged each other after the verdict. They thanked prosecutor Juan Martinez and the lead detective on the case, but declined comment until after sentencing.

Alexander's friend, Chris Hughes, said he was happy with the verdict, pointing out a bold proclamation Arias made in one of her jail house interviews that she wouldn't be found guilty.

"She said, `No jury would convict me. Mark my words.' This jury convicted her," Hughes said. "Luckily, we had 12 smart jurors. They nailed it."

When asked about Alexander's family, Arias told the station, "I just hope that now that a verdict has been rendered, that they'll be able to find peace."

Arias seemed to cry silently when asked about her mother. With tears falling, she said her mom "has been a saint and I haven't treated her very well."

The Maricopa County Sheriff's Office said no more media interviews with Arias would be granted. She has been placed on suicide watch.

Outside court, more than 200 spectators and reporters watched for the verdict on their smart phones . A ripple of relief spread as people learned the result. The crowd cheered, with some people jumping, waving, high-fiving and dancing in approval.

Hughes said it was frustrating to hear the defense besmirch his friend's reputation during the trial, but praised the jurors for the verdict. He said he and the Alexander family were shocked by the international attention the case had received.

"Travis was grandiose, so it's interesting how this played out ... it is a bit of a circus. We were all surprised that it's like this," he said.
© Copyright 2020 AccessWDUN.com
All rights reserved. This material may not be published, broadcast, rewritten, or redistributed without permission.