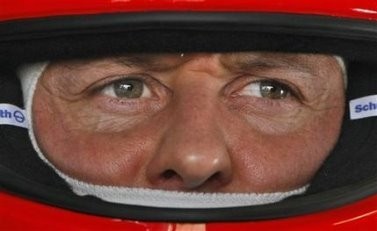 FILE - In this March 12, 2010 file photo Mercedes Grand Prix driver Michael Schumacher of Germany is pictured in the pits during the first practice session at the Formula One Bahrain International Circuit in Sakhir, Bahrain. Schumacher is being treat
Related Articles
Fire on side of Ga. 365 impacts traffic in Stephens CountyGainesville City Council approves new use for iconic Enota Drive buildingConfederate memorial in Lawrenceville will be moved to storageDon Sutton, HOF pitcher, Braves announcer, succumbs to cancer
Contact Editor
GRENOBLE, France - Doctors treating Michael Schumacher refused Monday to predict an outcome for the seven-time Formula One champion, saying they were taking his critical head injury "hour by hour" following a skiing accident.

Chief anesthesiologist Dr. Jean-Francois Payen told reporters that Schumacher was still in a medically induced coma and doctors were focusing only on his current condition.

"We cannot predict the future for Michael Schumacher," said Payen, who is also in charge of Grenoble University Hospital's intensive-care unit.

"He is in a critical state in terms of cerebral resuscitation," he added. "We are working hour by hour."

Schumacher, the most successful driver in Formula One history, arrived at the Grenoble hospital a day earlier, already in a coma, and immediately underwent brain surgery.

The German driver was skiing with his son Sunday morning in the French Alpine resort of Meribel when he fell and hit the right side of his head on a rock. He was wearing a helmet, but doctors said it was not enough to prevent a serious brain injury. Payen said Schumacher would have died without the helmet.

Gerard Saillant, a trauma surgeon who operated on Schumacher when he broke his leg in a 1999 race crash, was at the hospital as a visitor. He told reporters that Schumacher's age - he turns 45 on Jan. 3 - and his fitness should work in his favor.

But the neurology team at Grenoble University Hospital, which is recognized as among the best in France, was cautious about Schumacher's prognosis.

They lowered his body temperature to between 34 and 35 degrees Celsius (93.2 to 95 degrees Fahrenheit) as part of the medically induced coma, which essentially rests the brain, slowing its metabolism to help reduce inflammation after an injury.

The hospital, in a city that is the gateway to the French Alps, sees a large number of skiing accidents every year.

Schumacher has been seriously hurt before. In addition to the broken leg in a crash at the Silverstone race course, he also suffered serious neck and spine injuries after a motorcycle accident in February 2009 in Spain.

The area where Schumacher was skiing is part of a web of trails that slice down through a vast and, in parts, very steep snowfield. Although challenging, the snowfield is not extreme skiing. The runs are broad and neatly tended, and the ungroomed area in between - where the resort said Schumacher was found - is free of trees.

The resort said Schumacher was conscious when first responders arrived, although agitated and in shock. But Payen said Monday that after the fall Schumacher was not in a "normal state of consciousness." He was not responding to questions and his limbs appeared to move involuntarily, the doctor said.

He was airlifted to a local hospital and then later brought to Grenoble. Doctors said that stopover was typical and did not affect his condition.

His wife and other family members were at his bedside.

"The family is not doing very well obviously. They are shocked," said his manager Sabine Kehm, who added that the family still appreciated the outpouring of support.

The French prosecutor in Albertville has opened an investigation into the accident, according to the Mountain Gendarmerie in Bourg-Saint-Maurice. The goal is to determine the circumstances and cause of the accident.

Formula One drivers and fans rushed to wish Schumacher a quick recovery.

"Like millions of Germans, the chancellor and members of the government were extremely dismayed when they heard about Michael Schumacher's serious skiing accident," German Chancellor Angela Merkel's spokesman, Steffen Seibert, said in Berlin.

Sebastian Vettel, the Formula One racer for whom Schumacher was a boyhood idol, told German news agency dpa: "I am shocked and hope that he will get better as soon as possible."

Ferrari, which Schumacher raced for, also expressed its concern.

"Everyone at Ferrari has been in a state of anxiety since hearing about Michael Schumacher's accident," the company said in a statement, adding that its president, Luca di Montezemolo, and race team leader, Stefano Domenicali, were in contact with the family.

Former Ferrari teammate Felipe Massa, who himself recovered from life-threatening head injuries at the Hungarian Grand Prix in 2009, wrote on Instagram: "I am praying for you my brother!! I hope you have a quick recovery!! God bless you Michael."

British former world racing champion Jenson Button posted that "Michael more than anyone has the strength to pull through this."

Some fans gathered outside the hospital Monday.

Nuravil Raimbekov, a student from Kyrgyzstan who is studying in Grenoble, said Schumacher has been an inspiration to him.

"I'm worried, of course, like all of you, all of the fans, supporters, but I still hope and I will pray for him," he said.

During his career, Schumacher won seven drivers' championships and 91 race wins. After initial success with the Benetton team, Schumacher moved to Ferrari and helped turn the Italian team into the sport's dominant force. After initially retiring in 2006, he made a comeback in 2010 and raced for three years with Mercedes.
© Copyright 2021 AccessWDUN.com
All rights reserved. This material may not be published, broadcast, rewritten, or redistributed without permission.