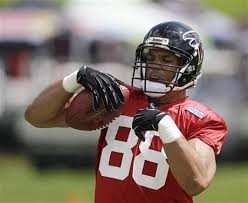 The Atlanta Falcons, after wrapping up an ugly 4-12 season, won't be the same without their superstar tight end.

Gonzalez reaffirmed Sunday that he doesn't plan to play another NFL game after the Falcons lost 21-20 to the Carolina Panthers.

"It's time for me to go into the next stage of life just like everybody else," he said. "Nobody's immune to this, and the way I've been able to go out on my own terms, it's a blessing. And like I said, I have no regrets."

If his remarkable career is indeed finished, Gonzalez will look back on his last game as something special.

Over 40 family members and friends stood on the right side of the field as he jogged through the tunnel of noise, smoke and adulation during pregame introductions.

His wife and three kids greeted him with hugs at halftime after Falcons owner Arthur Blank presented him with a commemorative helmet and the Georgia Dome flashed video highlights of his 12 years with Kansas City and five with Atlanta.

"It was just snapping in and out and trying to control those emotions because they were running through me today - everything," Gonzalez said. "I felt like crying at times, and then the game comes up and you're all intense, trying to go out there and do what I've been doing for the last 17 years."

Gonzalez ended the game with 56 yards receiving on four catches, leaving him as the league's No. 2 career leading receiver, a 13-time Pro Bowl pick and a six-time All-Pro first-team selection who ranks fifth in yards receiving and sixth in touchdown catches.

Sunday's loss followed the form of so many other setbacks for the Falcons this year.

They took the lead, blew the lead and came up a few plays short. Again.

But Gonzalez stayed true to form by putting a positive spin on the outcome, which was doomed after center Joe Hawley blew an assignment in the closing seconds by snapping the ball past quarterback Matt Ryan for a 16-yard loss.

"It's offense, defense and special teams and then the ball's got to go your way," Gonzalez said. "We didn't have that this year. It seemed like the horseshoe fell out of our butts. Even in this game today. We were driving, and everybody felt confident and we were going to get the job done (almost) like last week in San Francisco and then all of a sudden, it's a fluke-type play."

Ryan's day ended with nine sacks, a single-game career high. Carolina's Greg Hardy was deployed in several different roles along the line and finished with four sacks to help the Panthers set a single-game record for sacks.

The Falcons lost after leading 7-0 on Jason Snelling's 9-yard touchdown catch in the first quarter, 10-0 on Matt Bryant's 42-yard field goal in the second and 17-14 on Roddy White's 39-yard TD reception in the third.

It seemed appropriate that Ryan's last completion went to Gonzalez for a 9-yard gain with 5 seconds left. Atlanta's season ended on the next play, an overthrown ball to White.

Gonzalez maintained his season-long stance that he feels no disappointment for putting off retirement to help the Falcons reach the Super Bowl.

They had come up just 10 yards short in the NFC title game last season and seemed to have the pieces in place to make another run.

But an abundance of injuries, a weak offensive line and a defense prone to big plays ruined Atlanta's chances, thus ending Gonzalez's career with just one playoff victory, a 30-28 thriller last January against Seattle.

"Obviously it just wasn't in my cards, and I'm OK with that, honestly," Gonzalez said. "Don't ever look at me and say, `Well, he never won the big game.' I hope there's no glitch on my record because of that, and if you think that way, I don't know what you're talking about. I really don't because this is the ultimate team sport."

White was among those bitterly disappointed that Gonzalez went out with a loss after the Falcons went 45-19 over the previous four years.

"I just feel bad for Tony because we wanted to send him out with a win," White said. "But we just haven't found any ways to win this year. The fourth quarter hasn't been ours all year."

NOTES: Ryan moved past Steve Bartkowski to become the Falcons' career-leading passer with 23,472 yards. ... CB Asante Samuel was active but did not play. With Atlanta committing to playing rookies Desmond Trufant and Robert Alford and fourth-year cornerback Robert McClain late in the season, Samuel took only one snap over the last four games. ... LB Sean Weatherspoon (knee) missed his second straight game and was sidelined for nine games this year.
© Copyright 2021 AccessWDUN.com
All rights reserved. This material may not be published, broadcast, rewritten, or redistributed without permission.