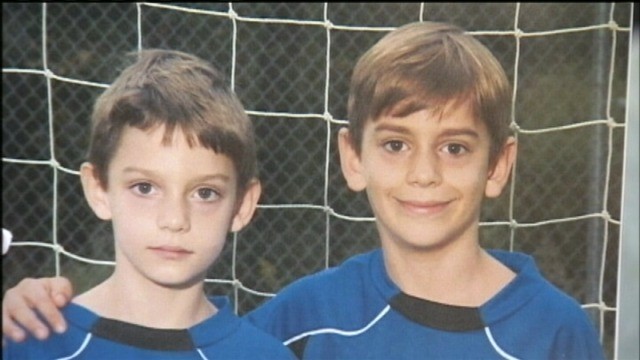 Henry, 7, and Ben, 9, were found safe Saturday in Austin, Texas after their father was pulled over by police.(Courtesy Fox 5)
Related Articles
Investigators comb for clues in Friday night plane crashFlowery Branch man to be sentenced for dealing drugs from prisonVoting bills flood Georgia legislature as GOP seeks limitsHumane Society of Northeast Georgia hiring medical positions
Contact Editor
ATLANTA (AP) Police said two young boys from Georgia who were reported missing this week were found safe in Texas on Saturday and their father is in custody and facing charges.

Brothers Ben and Henry Cleary ages 9 and 7 were visiting with their father, Daniel Cleary, of Roswell, and were supposed to return home Wednesday. An Amber Alert was issued Thursday.

``We have recovered the kids,'' McGee told The Associated Press. ``They were with him and they were OK.''

Austin police said a citizen had recognized the boys from the alert and notified police at 5:11 p.m. CDT that they were at a hotel.

The children's mother, Theresa Nash, spoke to the boys by phone and was on the way to get them.

She told FOX 5 Atlanta they were ``battling each other on their IPads and planning Henry's birthday party.''

Nash had told WGCL-TV in Atlanta she was concerned because Daniel Cleary had purchased a firearm about a month ago, was under stress and drinking.

Police said they did not know if Daniel Cleary was in possession of a firearm when he was taken into custody.

McGee said authorities will arrange for Daniel Cleary's extradition to Georgia. He faces a charge of interstate interference with custody, a felony. McGee said police will discuss with prosecutors whether other charges will be brought.

Police on Friday had released surveillance footage showing the two missing boys at a Walmart in Tennessee on Dec. 23 and 24 with their father. Though initial reports were that the Walmart was in Jackson, McGee said it was in fact in Chattanooga.
© Copyright 2022 AccessWDUN.com
All rights reserved. This material may not be published, broadcast, rewritten, or redistributed without permission.