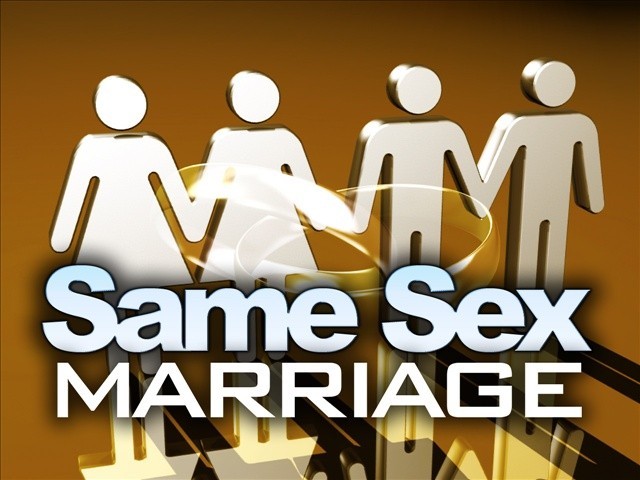 With tears in their eyes, they were among the first gay couples to exchange wedding vows early Saturday morning after Maine's same-sex marriage law went into effect at midnight.

"We're paving the way for people to go after us. I think it's just amazing. It's freeing. It's what's right," an emotionally drained Gorney said after their ceremony in front of City Hall.

After waiting years and seeing marriage rights nearly awarded and then retracted, gay couples in Maine's largest city didn't have to wait a moment longer than necessary to wed, with licenses issued at the stroke of midnight as the law went into effect.

Steven Bridges and Michael Snell were the first in line, and they received cheers from more than 200 people waiting outside after they wed in the clerk's office.

"It's historic. We've waited our entire lives for this," said Bridges, a retail manager, who's been in a relationship with the Snell, a massage therapist, for nine years. Bridges, 42, and Snell, 53, wore lavender and purple carnations on black T-shirts with the words "Love is love."

Voters in Maine, Maryland and Washington state approved gay marriage in November, making them the first states to do so by popular vote. Gay marriage already was legal in New York, Connecticut, Iowa, Massachusetts, New Hampshire, Vermont and the District of Columbia, but those laws were either enacted by lawmakers or through court rulings.

In Maine, Gov. Paul LePage signed off on the certified election results on Nov. 29, so the new law was to go into effect 30 days from that date. The law already is in effect in Washington state; Maryland's takes effect on Tuesday, the first day of 2013.

Nobody knew exactly how many couples would be rushing to get their marriage licenses early Saturday in Maine. Falmouth joined Portland in opening at midnight. Other communities including Bangor, Brunswick and Augusta planned to hold special Saturday hours.

In Portland, the mood was festive with the crowd cheering and horns sounding at midnight as Bridges and Snell began filling out paperwork in the clerk's office in Portland City Hall. There were free carnation boutonnieres and cupcakes, and a jazz trio played.

Outside, the raucous group that gathered in front of the building cheered Bridges and Snell as if they were rock stars and broke into the Beatles' "All You Need is Love."

Fourteen couples received marriage licenses, and five of them married on the spot, a city spokeswoman said. Many of those who received their marriage license were middle-aged, and some said they never envisioned a day when gay couples could wed just like straight couples.

"I came out years ago and the only thing we wanted was to not get beaten up," said Steven Jones, 50, who married his partner, Jamous Lizotte, on his 35th birthday.

Not everyone was getting married right away.

Suzanne Blackburn and Joanie Kunian, of Portland, were among those in line to get their license at midnight, but they planned to have their marriage ceremony later. One of their grandchildren wanted them to get married on Valentine's Day.

"I don't think that we dared to dream too big until we had the governor's signature," Blackburn said. "That's why it's so important, because it feels real."

Bridges and Snell already considered themselves married because they'd held a commitment ceremony attended by friends and family six years ago. Nonetheless, they thought it was important to make it official under state law, as Snell's two daughters watched.

Katie and Carolyn Snell, the daughters, said the ceremony made formal what they knew all along to be true about the couple.

"It's just a piece of paper," said Katie Snell. "Their love has been there, their commitment has been there, all along. It's the last step to make it a true official marriage because everything else has been there from the start."
© Copyright 2022 AccessWDUN.com
All rights reserved. This material may not be published, broadcast, rewritten, or redistributed without permission.