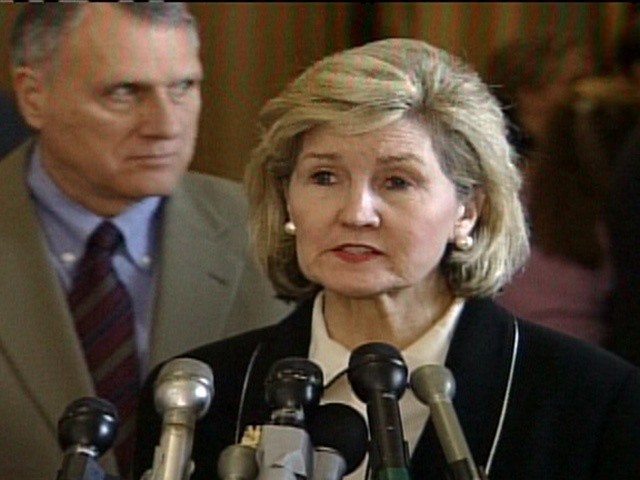 "I think we ought to be looking at where the real danger is, like those large clips," said Sen. Kay Bailey Hutchison, R-Texas. (File photo)
Related Articles
Cuomo sorry for remarks aide 'misinterpreted' as harassmentNY Gov. Cuomo acknowledges behavior seen as 'flirtation'Cuomo acknowledges behavior seen as 'flirtation'Spacewalking astronauts prep station for new solar wings
Contact Editor
WASHINGTON (AP) -- Lawmakers from both parties are voicing their willingness to pursue some changes to the nation's gun laws, but adamant opposition from the National Rifle Association has made clear than any such effort will face significant obstacles.

NRA CEO Wayne LaPierre dismissed efforts to revive a ban on assault weapons as a "phony piece of legislation" that's built on lies.

Democratic lawmakers in Congress have become more adamant about the need for stricter gun laws since the shooting of 20 children and six teachers at Sandy Hook Elementary School in Newtown, Conn. Sen. Dianne Feinstein of California is promising to push for a renewal of expired legislation that banned certain weapons and limited the number of bullets a gun magazine could hold to 10.

"I think we ought to be looking at where the real danger is, like those large clips," said Sen. Kay Bailey Hutchison, R-Texas.

Both lawmakers appeared Sunday on CBS' "Face the Nation," where NRA President David Keene said lawmakers were asking the wrong question when discussing how many rounds a gun magazine should have.

The right question, he said: "Can we keep guns out of the hands of people who are potential killers?"

LaPierre made clear it was highly unlikely that the NRA could support any new gun regulations.

Instead, LaPierre reiterated the group's support for putting police officers in every school.

"If it's crazy to call for putting police and armed security in our schools to protect our children, then call me crazy," LaPierre said on NBC's "Meet the Press." "I think the American people think it's crazy not to do it. It's the one thing that would keep people safe."

Sen. Joe Lieberman, a Connecticut independent, said he found the NRA's statements in recent days to be "really disheartening." Still, he said he agrees with some of the points the group has made about the causes behind violence in America.

"But it's obviously also true that the easy availability of guns, including military-style assault weapons, is a contributing factor, and you can't keep that off the table. I had hoped they'd come to the table and say, everything is on the table," Lieberman said.

Sen. Chuck Schumer, D-N.Y., said LaPierre was "so extreme and so tone deaf" that he was making it easier to pass gun legislation.

"Look, he blames everything but guns: movies, the media, President Obama, gun-free school zones, you name it. And the video games, he blames them," Schumer said.

"It's going to be a battle. But the president, I think, and vice president, are really ready to lead the fight," he said.
© Copyright 2022 AccessWDUN.com
All rights reserved. This material may not be published, broadcast, rewritten, or redistributed without permission.

Cuomo sorry for remarks aide 'misinterpreted' as harassment
New York Gov_ Andrew Cuomo has acknowledged for the first time that some of his behavior with women “may have been insensitive or too personal."
By The Associated Press

NY Gov. Cuomo acknowledges behavior seen as 'flirtation'
New York Gov_ Andrew Cuomo has acknowledged for the first time that some of his behavior with women “may have been insensitive or too personal."
By The Associated Press

Crisis deepens for Cuomo; AG wants to lead harassment probe
New York Attorney General Letitia James has rejected a plan announced by an aide to Gov. Andrew Cuomo to team up with the state’s chief judge in choosing an independent lawyer to investigate claims of sexual harassment against the embattled governor
By The Associated Press
Privacy | User Agreement | Contact | Advertise With Us
2022 © Jacobs Media Corporation. All rights reserved. EEO Report. Website by Full Media
Login / My Access
close
Search