Keeping up a piece of Flowery Branch history 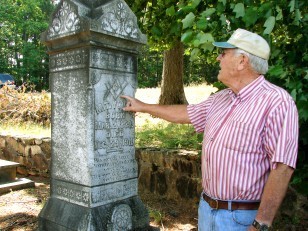 Flowery Branch Mason Herman Day points to the Masonic emblem on one of the monuments in the Robert Young Cemetery. 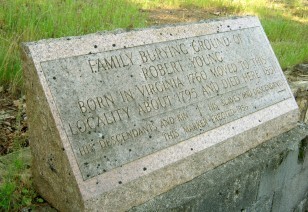 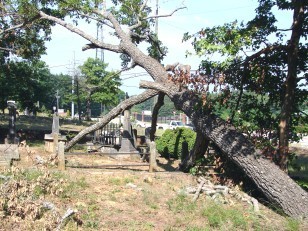 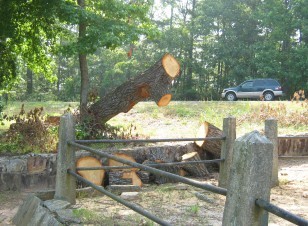 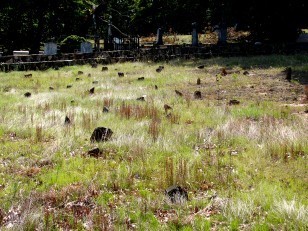 Contact Editor
FLOWERY BRANCH - The maintenance and restoration of a historic family cemetery may now begin once more thanks to a "Good Samaritan" woodcutter who cranked up his chain saw and cut away a fallen tree that threatened the burial place on the edge of Flowery Branch.

Members of the Flowery Branch Masonic Lodge seek no credit or recognition for the restoration and maintenance project they first undertook 10 years ago, and apparently neither does the unidentified person who has cut back the giant chestnut oak tree that threatened to further damage and obliterate the monuments in the Robert Young Cemetery on Atlanta Highway across from the Atlanta Falcons Complex. The tree was blown over during a strong April storm and its huge limbs knocked down one monument and menaced the others.

The Masons began their graveyard maintenance as a service project and because at least one of the headstones bears the Masonic Square and Compass.

" It surprised us all and broke our hearts," Past Master of the Lodge and former Cemetery Committee Chairman Herman Day said, pointing to the toppled tree which he estimated to be 100 years old. Day said the Masons feared anyone using a chain saw might cause more damage if cut sections fell on the gravestones, but the limbs were skillfully cut back and away from the cemetery. Hall County Commissioners were advised they could not cut the tree away because the cemetery is on private property.

Virginian Robert Young arrived there in 1795, established a plantation on thousands of acres in what was the Cherokee Nation, and built a home and his tavern just down the road from the family cemetery, where he was buried after he died in 1851. In the face of his raised grave monument is carved his family' s entire genealogy, considered a very rare feature for burials of that period.

A Georgia historical marker identifies the location of Young' s Tavern, where Andrew Jackson and his troops spent the night on their way to Florida to fight in the first Seminole War. Day said according to legend winning a poker game at the tavern would bring bad luck.

" If you won playing poker, nobody saw you again," he said. " If you lost you were on your way, kind of bad luck in reverse, you might say."

Lodge Secretary Perry Roper said he does not want the history of the place to fade away and willingly gives his time every month to cut the grass and remove the litter.

" We could lose all the history here," Roper said. " We just want to keep all the history up and let the people see what it was like back in those times. The way we bury today is totally different from how they did it back then."

On an adjacent area outside the walled containment where Young and his relatives are buried are several stones protruding from the ground. " They belonged to slaves and Indians who were here," Roper said. " They just marked them with plain markers, as far as the slave section is, there' s no telling how old that is, there are no names, they are unknown."

Day said Hall County' s 20th Century history left its mark on the cemetery with the construction of Lake Lanier.

" When the lake came up it changed the integrity of the cemetery a little," he said. " The people who didn' t have another place to be buried were moved here."


In a corner are seven graves moved to the Young Family cemetery by the U.S. Army Corps of Engineers according to a Corps marker placed with the headstones.

Day and Holder both hope they can secure the volunteer services of a cemetery restoration monument expert to repair and erase the damage done by the old chestnut oak tree. Day said they could also use some volunteer time and effort with a wood chipper to clean up all the fallen limbs.

" In Thy hands I commit my spirit, for Thou has redeemed it, Lord God of Truth," her headstone inscription reads.
© Copyright 2021 AccessWDUN.com
All rights reserved. This material may not be published, broadcast, rewritten, or redistributed without permission.