'The Lady With the Glass Eye' is identified 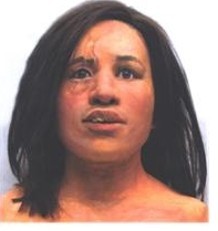 Clay reconstruction that was posted on the Internet and helped lead to Adams' identification almost 31 years after her remains were found. 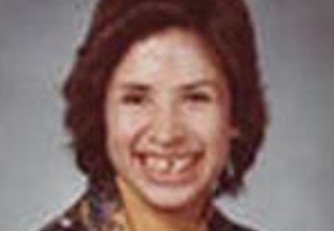 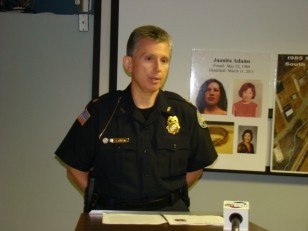 Contact Editor
GAINESVILLE - The Hall County Sheriff's Office Thursday announced that a nearly 31-year-old mystery has been solved: "The Lady With the Glass Eye" has been identified.

Juanita Adams had remained unidentified since her remains were found near Oakwood by a survey crew working along the southbound lane of I-985 May 22, 1980, in a wooded area approximately 75-100 feet from the shoulder of the highway

During the course of the initial investigation conducted by both the Hall County Sheriff's Office and the Georgia Bureau of Investigation, the body was determined to be that of an adult female.

Initial forensic examination revealed she had a prosthetic right eye. Additionally a small coral and turquoise ring was found underneath the body. The woman had pre-existing injuries, some of which had been repaired. The right side of her face, her right eye, and the hair line area of the front of her skull had evidence of medical procedures. A cause of death could not be determined at the time and still remains a mystery.

Sara Pickard was a detective with the Hall County Sheriff's Office at the time and remembers being called to the scene.

"There was bones, a very small amount of mummified skin, and we found that glass eye," she said.

*The woman was 17-24 years of age and likely to have been 19-20 years old at the time of her death. Death occurred between two months and three years before the remains were found. The injuries and the subsequent fitting of the prosthetic eye would likely have occurred between six months to two years prior to death. Her hair and eyes were brown and she was between 5'2" and 5'6" tall. She had interracial skeletal features possible of African American or Native American mixed with Caucasian. She woman most likely died between February 1977 and March 1980 and received her pre-existing injuries between 1974 and 1979.

Hall County investigators conducted an exhaustive search for the manufacturer of the prosthetic eye without success. Follow-up on any missing person cases was also unsuccessful. No substantial leads were able to be developed and the case went unsolved.

Over the next 27 years multiple investigators followed any leads that were obtained. Several skeletal reconstruction composites were created and published. These leads were investigated but the identity and circumstances surrounding the human remains was not determined.

On January 17, 2007 after reviewing the case file, Lt. Gerald Couch contacted Marla Lawson, a forensic artist with the Georgia Bureau of Investigation. Lawson was briefed on the case and was requested to construct a new skeletal reconstruction.

On April 18, 2007 Lt. Couch met with Lawson and received the completed reconstruction. Details of the human remains and an image of the skeletal reconstruction were placed on the GBI website and the Doe Network as well as contact information for Lt. Couch.

As a result of this information, Lt. Couch began procedures to officially identify the human remains. DNA samples were collected from a sibling of Juanita Adams for comparison.

On September 19, 2010, the samples were submitted to B.J. Spamer with the University of North Texas Center for Human Identification for analysis and comparison.

On March 21, 2011, Lt. Couch received confirmation from B.J. Spamer that the human remains were indeed those of Juanita Adams.

Pickard said knowing who the remains belong to should bring Adams' family some peace and some closure.

"Somebody somewhere cared about this gal, and they've wondered where she was," said Pickard.

The remains have been returned to the family and funeral services are scheduled for Saturday in Red Shirt, South Dakota.

(AccessNorthGa.com's Ken Stanford contributed to this story.)
© Copyright 2021 AccessWDUN.com
All rights reserved. This material may not be published, broadcast, rewritten, or redistributed without permission.