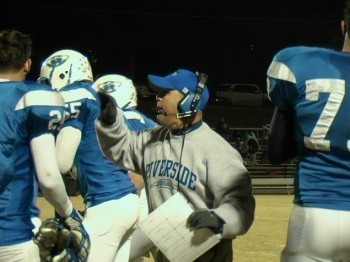 Contact Editor
GAINESVILLE - Trailing 21-19 late in the game and riding its workhorse running back Tersuo Uhaa, the Riverside Military Academy football looked to be in prime position to pull out a first round win over Pinewood Christian Friday night.

But the Pinewood defense forced Uhaa to fumble with 3:56 left in the game and then sealed the game with a touchdown in the waning seconds for a 28-19 win at Maginnis Field.

The fumble came one possession after Pinewood had stopped the Eagles on fourth down.

Joe Heath and the Riverside defense kept the Eagles in the game but Riverside had three turnovers in the second half that proved to much to overcome.

Uhaa finished with 78 yards on 19 carries and one touchdown for Riverside.
© Copyright 2021 AccessWDUN.com
All rights reserved. This material may not be published, broadcast, rewritten, or redistributed without permission.