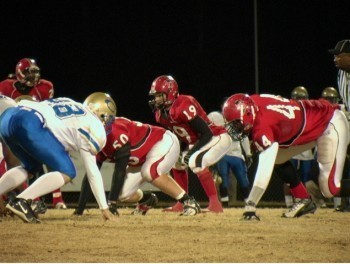 Contact Editor
FLOWERY BRANCH - The football season comes to an end for Flowery Branch as the Falcons lose to the Chamblee Bulldogs 47-34 in the first round of the Class AAA playoffs at Falcons Field.

The Bulldogs had too many weapons on offense, and even though the Falcons stayed with them for most of the game, Chamblee broke a third quarter tie with three consecutive touchdowns to seal the win.

In the first half, the only thing to stop the Bulldogs offense was the play clock signaling halftime.

The first time Chamblee touched the ball, it scored. Malcolm Beyah rumbled 41 yards on an end around for a 7-0.

But as he has done all year, senior quarterback Jaybo Shaw led the Falcons right back down the field. Engineering an 11-play, 76-yard drive, Shaw capped off the drive with a 6-yard scoring pass to brother Connor to tie the game at 7-7.

But the Bulldogs scored consecutive touchdowns to go up 21-7, one on a 75-yard scoring pass from quarterback Garrett Williams to tight end Ryan Smith, and the other on a 41-yard touchdown run by Darius Jones.

The Falcons cut into the lead with a 1-yard run by Jaybo Shaw.

However, the Bulldogs again had a counter. They moved 67 yards in a mere four plays as Williams hit Beyah with a 54 scoring strike to make it 28-14.

On the ensuing kickoff, Norvelle Van juiced up the crowd with a 100-yard kickoff return for a score. However, the play was called back due to a clip. From there the Jaybo-to-Connor combination stuck in another score right before the end of the half to cut the Bulldogs lead to 28-21 at the break. Jaybo hit Connor with a 9-yard touchdown capping of a two-play 50-yard drive.

Flowery Branch gave the home crowd something to cheer about in the opening moments of the third quarter, taking the second half kickoff and moving 85 yards in seven plays to tie the game at 28.

But that would be as close as the Falcons would get, as the Bulldogs peeled off 19 unanswered points to seal the win.

Jaybo Shaw, playing in his last game at Flowery Branch, accounted for all but 16 yards of the 396 total yards of offense by the Falcons. He was 20-of-40 passing for 242 yards and rushed 18 times for 137 yards.

Chamblee had a balanced rushing and passing game out of the wishbone, amassing 535 yards on the night.

Chamblee (10-1) moves on to round two next Friday night traveling to Region 8-AAA champion Stephens County.
© Copyright 2021 AccessWDUN.com
All rights reserved. This material may not be published, broadcast, rewritten, or redistributed without permission.