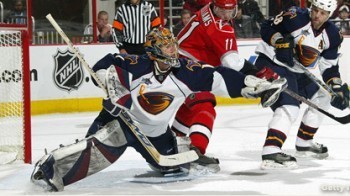 Contact Editor
RALEIGH, N.C. - Marian Hossa had two goals and an assist to lead the Atlanta Thrashers to a 3-0 victory over the Carolina Hurricanes on Friday night.

Johan Hedberg made 31 saves for his 11th career shutout, Todd White had two assists, and Ilya Kovalchuk added an empty-net goal in the final minute.

Hossa had his second multigoal game of the season, with both coming against the Hurricanes. Six days earlier, he scored twice in the Thrashers' 5-3 loss to Carolina.

Cam Ward stopped 22 shots for Carolina, which entered with a league-leading 69 goals but couldn't generate many quality scoring chances against Hedberg and the Thrashers, 9-4 since GM Don Waddell replaced Bob Hartley as coach on Oct. 18.

Hedberg, who last season won both of his starts and allowed two goals against the Hurricanes, had his first shutout since blanking Columbus in March 2004.

The Thrashers' league-worst penalty-kill unit repeatedly frustrated a Carolina power play that entered as the league's second-best. The Hurricanes, shut out for the second this season, went scoreless on all four chances with the man advantage, the fifth time they failed to score a power-play goal all losses.

Hossa gave the Thrashers all the offense they'd need in the first period. His first goal came about 4.5 minutes into the game when he hustled down the ice, took a feed in the slot from White and beat Ward from point-blank range.

He and the Thrashers then made it a two-goal game by taking advantage of a critical Carolina turnover. Bret Hedican gave the puck away near the blue line, White scooped it up and passed to Hossa near the goal, and he beat a diving Ward with an easy backhand into an open net with about 5 minutes left.

NOTES: Kovalchuk, who also assisted on Hossa's first goal, has 13 goals and 10 assists in the 13 games since Hartley's firing. ... Carolina coach Peter Laviolette coached his 400th NHL game. ... D Niclas Wallin (shoulder, groin) was scratched for the Hurricanes, while LW Andrew Ladd returned after missing 16 games with an ankle injury.
© Copyright 2021 AccessWDUN.com
All rights reserved. This material may not be published, broadcast, rewritten, or redistributed without permission.