How 'bout a red-out? Richt runs out of motivational gimmicks 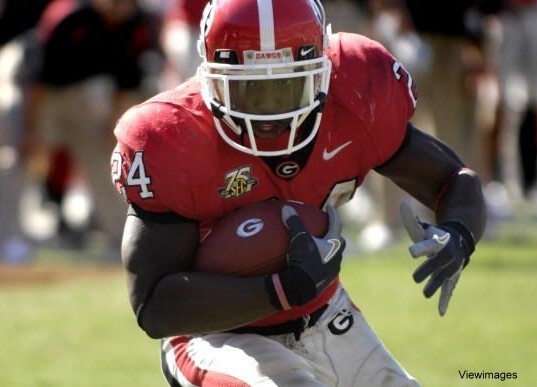 Contact Editor
ATHENS - The Great Motivator seems to have run out of ideas.

The best Mark Richt could do for Saturday's crucial Kentucky-Georgia game was a ``red-out.''

``Everybody wear red,'' the Georgia coach said, trying to contain a smile. ``Oh yeah, I think they do that anyway.''

Richt has pulled off two motivational coups in the past month, first ordering his players to get a celebration penalty against Florida, then breaking out black jerseys for last week's ``black-out'' game against Auburn.

Both had the desired effect, putting the No. 8 Bulldogs on an emotional high that carried them to the first season sweep of their two bitter Southeastern Conference rivals since 1982.

With those games behind them, Georgia (8-2, 5-2 SEC) can lock up at least a tie for the SEC East title with a win over No. 22 Kentucky (7-3, 3-3). Richt hopes that's enough motivation for his players since, well, he really doesn't have any other big ideas to fire them up.

``I don't know if I'll be able to sustain it,'' he said. ``If I can think of something new that might motivate the guys, that's good.''

Richt's players say the chance to play in the SEC championship game is motivation enough, though they'll need a little outside help to pull it off. Tennessee also has two conference losses and holds the tiebreaker over Georgia: a 35-14 win in Knoxville last month.

If the Vols win their final two games Vanderbilt on Saturday, followed by a trip to Kentucky they'll head to Atlanta to face top-ranked LSU on Dec. 1.

``We'll just have to see how it plays out,'' Georgia linebacker Rennie Curran said. ``We've got to keep doing what we're doing, control what we can control, and see what happens.''

He's focused on Kentucky, but will probably do a little scoreboard watching to see how Tennessee is doing against the Commodores.

He better not lose sight of Kentucky, either. This team has undergone a resurgence in coach Rich Brooks' fifth season.

The Wildcats are the only team to beat LSU and they can still force an unprecedented four-way tie for first in the SEC East by winning out, though they would lose a tiebreaker to Florida under that wild scenario.

``Even though we can't win it, if we win our last two, we can tie for the East title,'' tight end Jacob Tamme said. ``We've proven this year that we can compete for it. We've got a lot to play for, that's for sure.''

Kentucky's turnaround actually dates back to last season's 24-20 upset of Georgia, the defending SEC champion at the time. Tony Dixon scored the winning touchdown with 1:21 remaining, and the blue-clad fans stormed the field in Lexington, ripping down one of the goalposts.

``It gives me chills just thinking about it,'' Tamme said. ``It was a huge moment for this program. We've been able to kind of rise steadily since then.''

The Wildcats followed up the stunner against Georgia with their first postseason victory since 1984, beating Clemson in the Music City Bowl, and the momentum surely carried over into this season.

That said, Kentucky knows it will be even tougher to beat Georgia two years in a row, something they've never done in a series that the Bulldogs lead by a whopping 47-11-2 margin.

``They've gotten a ton better,'' Tamme said. ``They had a good team last year, but it wasn't their traditional top 10 Georgia team. ... This year, they've been able to get some of the wins they needed against those talented teams to stay in the top 10 and be a top 10 team.''

This doesn't figure to be a defensive struggle. The Wildcats rank 14th nationally with an average of more than 37 points a game, while Georgia has scored 40 points in three straight games for the first time since 1942.

Kentucky quarterback Andre Woodson leads the SEC with 29 touchdown passes and has three receivers with at least 40 receptions. Rafael Little is a dangerous runner (752 yards), but Kentucky does most of its offensive damage through the air.

The Georgia defensive backs are looking forward to the challenge.

``With the ball being in the air, this is kind of like our game,'' safety CJ Byrd said. ``We control the game.''

The Bulldogs have stepped up their offensive production dramatically since redshirt freshman Knowshon Moreno moved into the lineup. He's already become Georgia's first 1,000 yard rusher since 2002 and just the second Georgia freshman to rush for a grand (remember a guy named Herschel Walker?).

``Moreno is the real deal,'' Brooks said. ``If we don't wrap him up and knock him back some, we're in for a long day. He not only has speed and ability, but he runs like he's mad. ... There are times when you think he's down and all of a sudden he spins out of it, puts a hand on the ground and makes more yards. He's an angry runner.''

Those Georgia players who lost to Kentucky last season might be a little angry, too.

``It's going to be difficult because they're going to be trying to get some revenge on us from them coming up here last year and us pulling off the upset on them,'' Wildcats defensive lineman Jeremy Jarmon said. ``They're going to be fired up. They have a lot to play for. They can still win the SEC championship.''

That should be motivation enough.
© Copyright 2021 AccessWDUN.com
All rights reserved. This material may not be published, broadcast, rewritten, or redistributed without permission.