You can certainly select your fall pumpkins at the grocery store, but if you want the real experience of getting a pumpkin right out of the patch, there are options in North Georgia.

Jaemor Farms, with markets in both Alto and Commerce, is best known for its peaches, but pumpkins have become a fall mainstay for the 106-year-old family farm.

Drew Echols, co-owner and farm manager, said his grandparents grew some jack-o-lantern pumpkins in the 1980s, but it wasn't until 2006 that the family took the plunge and began growing dozens of pumpkin varieties. He credits his late grandmother Valvoreth Echols for pushing him to expand Jaemor's fall offerings.

"My grandmother's favorite time of the year was the fall. I mean, she loved peaches, but she loved pumpkins more," Echols said. "She would start showing me varieties of pumpkins that she wanted me to grow...in March so I could order the seeds in June."

Echols said Georgia is not known for growing pumpkins, mainly because the weather isn't suitable.

"There's a lot less humidity in those Midwestern states [where most pumpkins are grown] - and that's what we're fighting all summer long is the humidity that we don't like as people...it can create fungus on pumpkins," Echols said. "We're kind of right on the line - much more south of us in the state of Georgia you're not very successful with them. We've got some elevation here in the foothills of the mountains and they seem to do really well."

This year, the pumpkin crop is even more important to Jaemor because a hard freeze in April wiped out a majority of the 2021 peach crop. Echols said the pumpkin crop won't make up for the financial loss, but it will help.

"I don't know any grower who's ever retired wealthy growing pumpkins," Echols said with a laugh. "It's not like peaches or strawberries."

Not only does Jaemor sell pumpkins at its own markets, but the farm supplies pumpkins to corn mazes across the state. Echols also said he's fielded calls from Florida to Virginia from markets that want to buy pumpkins this year.

Over and above the pumpkin sales, Echols said what Jaemor offers to customers is a fall experience. The crews at the Alto market created a "pumpkin wall," where customers can see in one place many of the 40 varieties offered at Jaemor. They also built a "pumpkin house" on a rise next to some of the pumpkin fields on the property.

"People are walking around and taking pictures," Echols said. "It's a gorgeous view of the mountains up there, so people can hang out at the gazebo and look at the mountains and see all the pumpkins around them, so it's a good opportunity for them to just get out on the farm."

Bradley Weaver, 30, has been growing pumpkins in Dawson County since he was a little boy.

"When I was five, my parents told me that I needed to put myself through college as they did, so I told them I wanted to grow pumpkins," Weaver said. He said they were a little skeptical about the idea, but he persisted.

"Time went on and I kept saying 'I want to grow pumpkins' and that year, we put a few in the garden and since then we've grown and grown into what we are today," Weaver said.

What they are is Bradley's Farms, a working farm that grows seasonal produce - including about 10 acres of pumpkins - year-round. Weaver, with the help of his mother and father, who are both retired educators, sell what they grow at a location on Lawrence Drive just off Elliott Family Parkway. Visitors can peruse the homegrown vegetables under the shed attached to a rustic barn. Weaver's mother Karen manages a gift shop located inside an 1890s farmhouse that Bradley Weaver and his dad Tony took down board-by-board and reconstructed several years ago. The company also includes a landscaping component, which serves clients across the region.

Weaver said while his pumpkin patch may be a little off the beaten path, people have managed to find it.

"There's a lot of leaf-lookers and there's state parks and there's other places like Burt's [Pumpkin Farm] and apple orchards along the way, and when they get busy, we get busy," Weaver said.

Once a visitor finds Bradley's Pumpkin Patch, they tend to make a return visit.

"We're growing, but we are on the smaller scale and we're more personal," Weaver said. "People can just come back and spend the day here and relax."

In fact, some of Bradley Weaver's customers have grown up along with him.

"We do have quite a few families who've come over the years who had kids who were just five or so years younger than I was when I first started," Weaver said.

By the way, Weaver did grow enough pumpkins to put himself through college - he earned his Business Administration degree from the University of North Georgia in Dahlonega in 2014.

Most popular pumpkin variety at Bradley's: Any white pumpkin 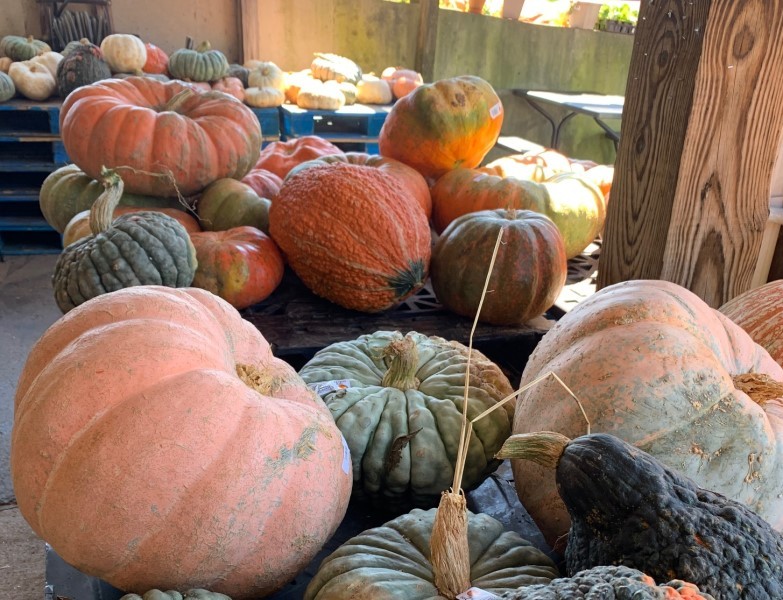