Confederate memorial in Lawrenceville will be moved to storage

The Gwinnett County Board of Commissioners on Tuesday approved to relocate a Confederate monument to storage while court proceedings — which will ultimately determine its fate — continue.

The 28-year-old monument sits on the grounds of Gwinnett County’s Historic Courthouse in Lawrenceville and became the focus of media attention and protests after it was vandalized in June 2020. In response, Gwinnett County Solicitor-General Brian Whiteside filed a lawsuit against Gwinnett County seeking a court order declaring the monument a public nuisance and directing County officials to remove it.

A second vandalization took place Thanksgiving Day, lending new urgency to today’s action. The resolution authorizes county staff to move the monument to an appropriate storage facility for protection and preservation until the court provides further direction or the lawsuit is resolved.

According to a press release from the Gwinnett County Board of Commissioners, Chairwoman Nicole Hendrickson said the present location of the monument may result in additional acts of vandalism and creates a public safety concern for both the city of Lawrenceville and Gwinnett County.

“While we’re respectful of the ongoing court proceedings, we feel that action is needed now to move the monument where it will not be a target for vandals,” said Hendrickson. “A monument celebrating the Confederacy on county property is inconsistent with the message of welcome and inclusion that the County is sending to the world. We should place it in storage to avoid further provocation and to help the cause of tranquility for the benefit of all.”

Multiple members of the Board of Commissioners spoke out about the decision to have it removed.

Commissioner Kirkland Carden said, “It is time to remove this monument of hate that has been a stain on Gwinnett County since it was erected in 1993. Gwinnett has always strived to be a welcoming and inclusive world-class community. Removing this monument is a step in the right direction and it is fitting that we voted to do so the day after we celebrated the legacy of Dr. Martin Luther King, Jr.”

Commissioner Ben Ku said, “This recently erected monument promoting slavery and racism is offensive, particularly as it rests on public land paid for by all taxpayers. Because it was placed at the courthouse with the permission of the Board of Commissioners duly elected by the people, it makes sense at this time to rescind that permission by another Board of Commissioners also elected by the people."

Commissioner Jasper Watkins III said, “After the Civil War, Robert E. Lee counseled the people of the South to move on and work toward the full unification of the country. One hundred and fifty-six years after the surrender of Appomattox, it’s time to take his words to heart. Removing this monument to the Confederacy and perhaps placing it in a museum will be a step forward.”

Commissioner Marlene Fosque said, “The Confederate monument glorifies disunion and civil war at a time when we strive to come together as a people in unity and peace so everyone feels included in the American Dream. It doesn’t make sense to have a monument like that here in Gwinnett County where diversity is celebrated.”

Last year the Gwinnett Daily Post said that proponents of removing the monument believe it is located close to the location on the Lawrenceville Square where a Black man, Charlie Hale, was lynched in 1911. They believe Hale should be memorialized on the property. 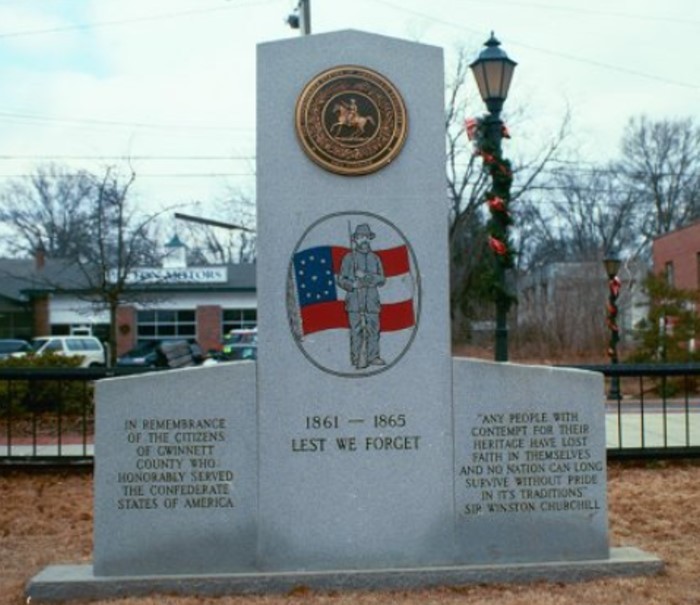