From 2012 through 2015, seven-time champion Jimmie Johnson dominated the fall race at the 1.5-mile track, winning four straight Playoff events there.

Kevin Harvick has a chance to duplicate that feat in Sunday’s Autotrader EchoPark Automotive 500. A nine-time winner this season, Harvick will start from the pole in the second race of the Round of 8, the same position from which he won last year’s Playoff contest at Texas.

Harvick took the lead in the NASCAR Cup Series standings in the fourth race of the season (Phoenix) and has held it since then with only one break — after the Playoff race at Talladega. Last Sunday at Kansas Speedway, in the opening Round of 8 event, he chased Joey Logano lap-after-lap in the closing stages but couldn’t find a way around the eventual winner, who did a masterful job blocking and taking Harvick’s preferred line.

It was the runner-up finish at Kansas, however, that buoyed Harvick’s confidence as the Texas race approaches. Harvick started and finished fifth in the July 19 event in Fort Worth, won by Austin Dillon.

“I feel better about Texas than I did (at Kansas),” Harvick said. “Our guys did a pretty good job of bringing a whole lot better car than what we had at the first race. If our car’s that much better at Texas than it was the first race, it should be a good weekend.

“You just never know how the cautions are going to fall, the strategy, anything like that. You just have to go lap-by-lap and see where it falls.”

Among Playoff drivers, Harvick and Denny Hamlin have three victories each at Texas. Logano, who triumphed in the spring race of 2014, is the only other Playoff driver with a win at the track.

Hamlin used his “mulligan” at Kansas, where he scraped the outside wall early in the race and finished 15th, leaving him just 20 points ahead of Chase Elliott, the first driver below the current Playoff cut line. The driver of the No. 11 Joe Gibbs Racing Toyota last won at Texas in last year’s spring race. Sunday’s event could well evolve into yet another showdown between Harvick and Hamlin, a recurring theme throughout the 2020 season.

Johnson, who has won a record seven times at the track, has three races left to claim a victory that would tie him for fourth on the all-time list with 84 wins. Kyle Busch needs a victory over that same stretch to avoid the first winless season in his 16-year Cup career.

The driver of the No. 98 Stewart-Haas Racing Ford picked up his ninth NASCAR Xfinity Series win of the year and earned automatic advancement into the Championship 4 season finale at Phoenix Raceway.

On Tuesday, Stewart-Haas announced that Briscoe would succeed retiring Clint Bowyer in the No. 14 NASCAR Cup Series Ford next year.

In stark contrast, Austin Cindric’s Kansas weekend couldn’t have been much worse. The driver of the No. 22 Team Penske Ford made an aggressive move between cars early in the race, tangled with the No. 9 Chevrolet of Noah Gragson and finished 28th.

Cindric dropped from second to fourth in the series standings, just two points clear of Justin Haley in fifth, the first spot below the Round of 8 Playoff cut line. But Cindric enters Saturday’s O’Reilly Auto Parts 300 as the most recent winner at Texas, and a season sweep would ensure a spot in the Championship 4.

Gragson fared even worse at Kansas. The wreck with Cindric dropped him to 36th (last) in the race and eighth in the standings, 33 points below the current cutoff. In practical terms, Gragson clearest path to the Championship 4 requires a victory at Texas or at Martinsville the following week.

Texas is problematic for Gragson. In his three starts at the track he has a best finish of 13th, and his last two races there have ended with 30th-place results.

“Texas has not treated us well in the past,” Gragson acknowledged. “We were really strong here in the spring and just got bit by the bad luck bug. We’re coming off a rough weekend in Kansas, but my team has their heads held high, and we know we can go in this weekend and win.

“We just have to put it all together and be there at the end, which I know we are capable of doing.”

Moffitt doesn’t have to win the race or even run well in the second event in the Gander RV & Outdoors Truck Series Round of 8. The driver of the No. 23 Chevrolet advanced to the Championship 4 round at Phoenix with his first victory of the season last Saturday at Kansas.

Ankrum, on the other hand, crashed out of the race after 38 laps and finished 34th, dropping to eighth in the standings, 56 points below the current Playoff cutoff. He comes to Texas with a win-or-bust mentality.

The remaining six Playoff drivers are scrambling for position, and that includes the ThorSport Racing entries of Grant Enfinger, Matt Crafton and Ben Rhodes, who are fifth, sixth and seventh in the standings, respectively.

Enfinger trails fourth-place Zane Smith by seven points, with Crafton, a three-time champion, eight points farther back. Rhodes is 33 points below the cut line, on the cusp of needing a victory at either Texas or Martinsville to advance.

Crafton is the only former Texas winner among the eight Playoff drivers. Kyle Busch Motorsports has won the last three races at the track, two by Kyle Busch himself and one by Greg Biffle.

WDUN will carry live PRN Radio coverage of the NASCAR race weekend at Texas Motor Speedway.  It begins with Saturday's NASCAR Xfinity Series O'Reilly Auto Parts 300 beginning at 4 pm on 102.9 FM, AM 550 and streaming live on AccessWDUN.  Coverage continues on Sunday with the NASCAR Cup Series Autotrader EchoPark Automotive 500 beginning at 2:30 pm on 102.9 FM and streaming live on AccessWDUN.

NASCAR Xfinity Series
Next Race: O’Reilly Auto Parts 300
The Place: Texas Motor Speedway – Fort Worth, TX
The Date: Saturday, October 24
The Time: 4:30 p.m. ET
TV: NBCSN, 4 p.m. ET
Radio: PRN, SiriusXM NASCAR Radio
Distance: 300 miles (200 Laps); Stage 1 (Ends on Lap 45), Stage 2 (Ends on Lap 90), Final Stage (Ends on Lap 200)
What To Watch For: Since the inception of the Playoffs in the NASCAR Xfinity Series in 2016, Texas Motor Speedway has hosted the fifth race of the postseason (Race No. 31 on the year). … The four Playoff races at Texas (2016-2019) have produced four different winners – Kyle Larson (2016), Erik Jones (2017), Cole Custer (2018) and Christopher Bell (2019). … The winner of the Texas Playoff race has never gone on to win the Xfinity title later that season. … Twice the Playoff race winners at Texas where non-Playoff contenders – Larson in 2016 and Jones in 2017. … In total Texas Motor Speedway has hosted the NASCAR Xfinity Series 39 times producing 24 different pole winners and 20 different race winners. … The first NASCAR Xfinity Series race at Texas Motor Speedway was on April 5, 1997 and was won by NASCAR Hall of Famer Mark Martin driving for Roush Fenway Racing. … Joe Gibbs Racing’s Kyle Busch leads the series in poles (four), wins (nine), top fives (16), top 10s (17) and laps led (1,701) at Texas. … Only one former series Texas winner is entered this weekend – Team Penske’s Austin Cindric who took the checkered flag at Texas back in July.

NASCAR Gander RV & Outdoors Truck Series
Next Race: Speedycash.com 400
The Place: Texas Motor Speedway – Fort Worth, TX
The Date: Sunday, October 35
The Time: 12 p.m. ET
TV: FS1, 11 a.m. ET
Radio: MRN, SiriusXM NASCAR Radio
Distance: 220.5 miles (147 Laps); Stage 1 (Ends on Lap 35), Stage 2 (Ends on Lap 70), Final Stage (Ends on Lap 147)
What To Watch For: Since the inception of the Playoffs in the NASCAR Gander RV & Outdoors Truck Series in 2016, two tracks have hosted the fifth race in the postseason – Texas Motor Speedway from 2016-2018 and Martinsville Speedway in 2019. Texas Motor Speedway did not participate in the Gander Truck Playoffs last season. … Three different drivers have won the fifth race in the Gander Truck Playoffs – at Texas Johnny Sauter won the 2016 and 2017 races, Justin Haley won the 2018 Texas Playoff race and at Martinsville Todd Gilliland won the 2019 Playoff race. … Gilliland was the only non-Playoff driver to win the fifth race in the Gander Trucks postseason. … Only once has the winner of the fifth race in the Playoffs gone on to win the title later that same season – Johnny Sauter in 2016. … In total Texas Motor Speedway has hosted the NASCAR Gander RV & Outdoors Truck Series 45 times producing 29 different pole winners and 23 different race winners. … The first Gander Trucks race at Texas was on June 6, 1997 and the race was won by Kenny Irwin Jr. driving a Ford for Jim Herrick. … Mike Skinner leads the series in poles at Texas with five. … Todd Bodine leads the series in wins at Texas with six. … Only two former series Texas winners are entered this weekend – Johnny Sauter (five wins) and Matt Crafton (two wins). … Crafton also leads the series at Texas in top fives (17) and top 10s (28). 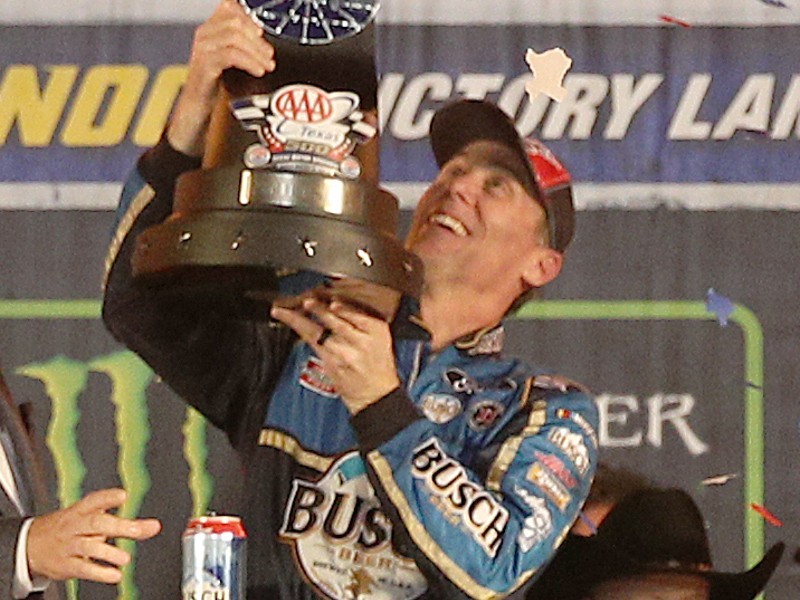