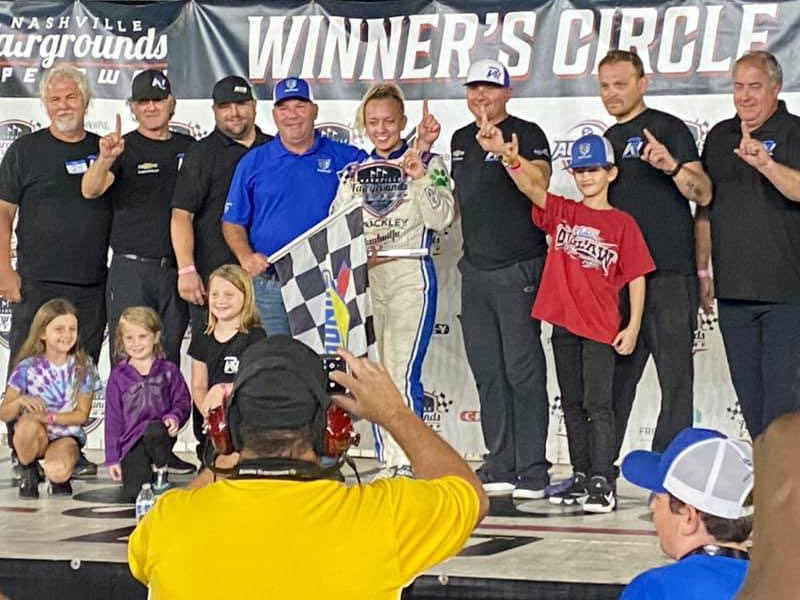 The 22-year-old from Kennewick, Washington drove to the victory at the end of the 100 lap feature to become the first ever female driver to win a premier division race on the 5/8th-mile raceway.

The race was led to the green by Austin Wilson and points leader Michael House. Wilson jumped out to the early lead, but lost the position on a restart after Tracey Green spun on the backstretch. The caution flew again just a few laps later when Zach Johnson backed his car into the turn one wall, ending his night.

House controlled the race for the next 60, rarely being challenged for the top spot. While he tried to run away from the field, Zamora began her march to the front. Coming from the outside of row three, Zamora spent the better part of the first half of the race battling with Michael Bolden for the third position. Not long after Zamora took the spot, Bolden blew a right front tire and brought out the caution. On the ensuing restart, Zamora capitalized and took the second spot from Wilson.

On lap 66, Corey Deuser’s car came to a stop on the front stretch with a mechanical issue as Zamora was reeling in House. After the restart, Zamora stayed close enough to House to make attempts to take the lead. The caution was displayed again when Wilson had a mechanical failure of his own and came to a stop just outside of the entrance to the infield pits.

On the restart, Zamora again worked to pass House. On lap 82, House picked up a push exiting turn two which allowed Zamora to drive to his inside. By the time they came back around to lap 83, Zamora was the leader.

Zamora held on the rest of the race to collect the win ahead of House, with William Hale in third, Hunter Wright in fourth, and Jackson Boone in fifth.

In the Super Trucks feature, Nicolas Formosa jumped out to the early lead, but it wasn’t long before John Burns tracked Formosa down and took the lead. Burns went on to collect the win and in turn wrapped up his bid for the 2021 Track Championship – his second in three years. Formosa finished in second, with Tanner Arms in third, James Shaw in fourth, and Phillip Hill in fifth.

In the Street Stock feature, Michael Pannel grabbed his second win of 2021, holding off Larry Cunningham and James Gentry.

The BH Holmes Construction Legends feature, Michael Crafton III used the bump and run to make a last lap pass on Austin Farr to collect another win. Farr would fall to third behind Oliver Cordell.

Dylan Jones moved late in the race to get around Terry Jackson to pick up the Pure Stock win. The Pest Doctor Front Runners were led early by Josh Harrell, but issues slowed his car, allowing Matt Hamlett to go on and collect the win. In the Bandoleros feature, Austin Harrison passed Aiden Potter in the final corner to grab his first win of the season.

The next event for Nashville Fairgrounds Speedway is the All American 400 on October 31. For more information, visit NashvilleFairgroundsSpeedway.racing.