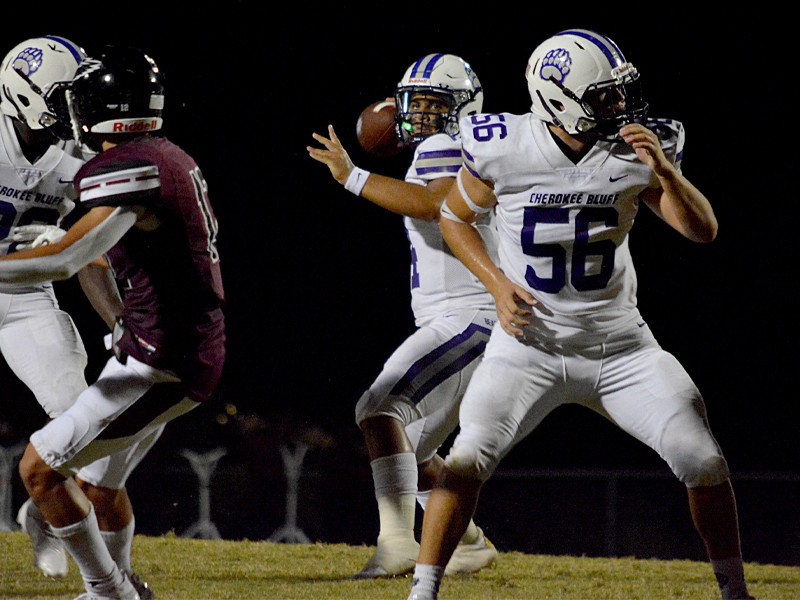 Bluff quarterback Sebastian Irons was 7-for-9 with 142 yards and a touchdown.
Photo/Kevin Mumpower
Contact Editor

GAINESVILLE — Cherokee Bluff is 2-0 for the first time in program history.

“Tonight was a big county win for us. I’m proud of our guys,” Bears’ coach Tommy Jones said. “They came out and played energized and executed well in the first half. We’re trying to build brick by brick, one day at a time. We’ll come back on Monday and practice and do the same thing.”

The Bears’ offense picked up right where they left off last week, scoring on each of their five possessions in the first half, putting them up 35-0 at the midway point. The defense did its part as well, posting a first-half shutout that included a blocked punt returned for a touchdown.

The linemen set the tone for the Bears on both sides of the ball. The Bluff ran and passed the ball efficiently, posting 413 total yards with 223 of those coming on the ground and 190 through the air. The starting defense allowed less than 100 yards of offense while they were on the field, and constantly in the War Eagles’ backfield.

“Those guys prepare well and work really hard,” Jones said. “There are high expectations for those guys up front on both sides of the ball. It’s been fun to watch those guys develop because they were freshmen and sophomores two years ago when the program started. Now they are starting to have some success and that’s fun to watch.”

“He [Jayquan Smith] is just such a great kid,” Jones said. “He runs hard and has really high expectations for himself. He’s such an unselfish kid and a selfless leader. There are not enough good adjectives to describe him.”

Charles Tolbert helped the ground game out for the Bears as well. Serving as a change-of-pace back, Tolbert ran for 36 yards on five carries and a score.

Sebastian Irons looked poised in his second career start, going 7-for-9 with 142 yards and a lone touchdown strike to Kansas commit Shad Dabney from ten yards out in the first half. Dabney finished the game 45 all-purpose yards on offense and a touchdown to go along with several tackles on defense for the Bluff.

Chestatee quarterback Christian Charles went 3-for-8 for 22 yards and ran 12 times for 70 yards. However, Chestatee was able to get on the board in the third and fourth quarters when backup quarterback Luke Bornhorst replaced Charles. Bornhorst went 3-for-5 for 40 yards, including a 34-yard strike to Hayden Gowan for a score, and ran for a 55-yard touchdown.

Freshman running back Jason Granados led the War Eagles in rushing with 81 yards on seven carries.

The Bluff (2-0) will have a bye next week while the War Eagles (0-1) will travel to Union County.