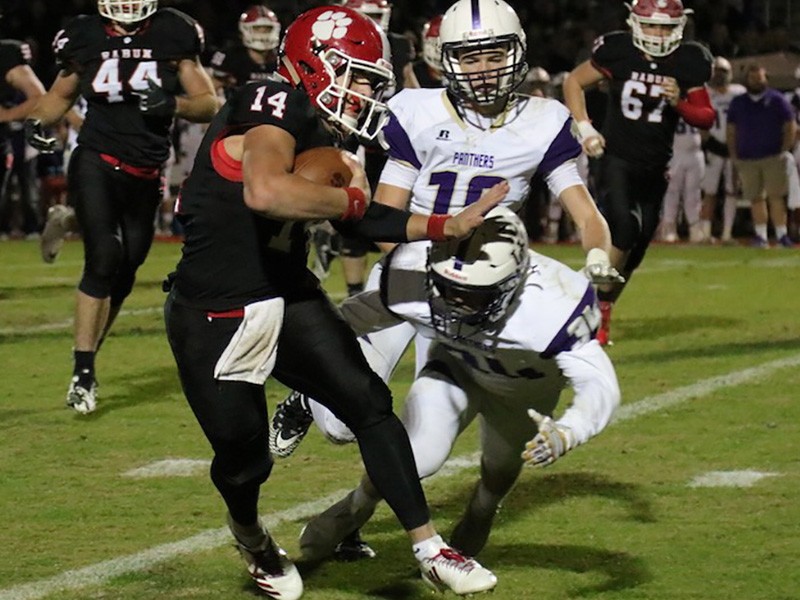 Junior quarterback Gunner Stockton, who committed to South Carolina last week, passed for 3,473 yards and 43 TDs and rushed for another 1,126 yards and 19 scores in 2019.
Photo/Seth Chapman

TIGER — Nine years ago, Rabun County football was just another mountain program. After the 2011 season, the Wildcats sat with an all-time record of 306-313 and just one region title to their credit.

In just eight seasons since, where they have gone 82-18 overall, they have transformed themselves into a regional power. They are the six-time reigning 8-2A champions and have added one state championship game appearance (2017) to the resume.

But second-year head coach Jaybo Shaw said it is time for his program to turn the corner for good.

“We feel like we’ve put ourselves on the map in north Georgia. Now, we’re ready to turn the corner and become a consistent state power,” Shaw said.

They already have been in the state conversation after five straight quarterfinals appearances. But what Shaw wants is to have his team challenging for state titles year-in and year-out, ala Buford.

“I think we’re right there to take that next step. Our No. 1 goal now is to win a state title. But we just have to find a way to perform better in the playoffs once we get deep.”

If the time is now, they have just the guy to lead the way in junior quarterback Gunner Stockton (South Carolin-commit), who is the No. 1 junior quarterback prospect in the nation. The gunslinger passed for 3,473 yards and 43 TDs and rushed for another 1,126 yards and 19 scores in 2019.

Stockton will have a plethora of weapons at receiver at his disposal in senior Riverside MIlitary transfer Adriel Clark, senior Sutton Jones, and juniors Tate Ramey and Hogan Woodard. Sophomore Lang Windham is expected to get the bulk of the carries after Stockton in the backfield with last year’s second-leading rusher Cory Keller moving to the defense.

“Adriel coming in gives us even more athleticism and I feel like we’re as good at receiver as we’ve ever been. We have a lot of playmakers so we feel like we’ll be able to continue to push the opposing defense,” Shaw said.

At the state level, faster and more athletic teams have been the Wildcats’ Achilles Heel, especially on the defensive side. But that could change in 2020. Despite losing a pair of tacking machines in AJ Wheeler and Mason Sprinkle, the linebacking corp may be deeper this season. Seniors Brody Jarrard and LB Hoff Windham and juniors Turner Grimmett and Will Turpin could make up one of the best units in the area.

Keller, now a sophomore, and junior Hunter Moore give them a pair of solid guys to anchor the secondary.

“We lost a couple of really good linebackers but I also think with another year for guys like Hoff and Turner we may be better by the end of the season,” Shaw said.

The talent certainly seems to be in place and Shaw, with the new realignment, built a schedule to help them make that final step. Seven of the Wildcats’ nine opponents made the playoffs in 2019.

They have two monster showdowns on tap, including one with Prince Avenue Christian on Sept. 11 at Frank Snyder Stadium that will feature Stockton and the Wolverines’ Brock Vandagriff, who is the No. 1 quarterback in the 2021 class and a University of Georgia-commit.

The Wildcats also will play host to Oconee County, the 2019 Class 4A state runner-up, on Oct. 2 followed by a Oct. 16 road trip to Class 6A Pope, but will not open region play until Oct. 30 against Banks County at home. They will have a tough close to the season traveling to the Granite Bowl the following week and then taking on arch-rival Union County in the finale.

“We feel it’s one of the best schedules we’ve ever put together,” Shaw said. “There are a lot of good teams with a lot of playoff experience that should help push us during the season. We don’t take anyone lightly and we prepare each week for the team we’re playing at that moment.

"But again, the goal now is to not just win the region title but to win a state title. That’s our focus.”