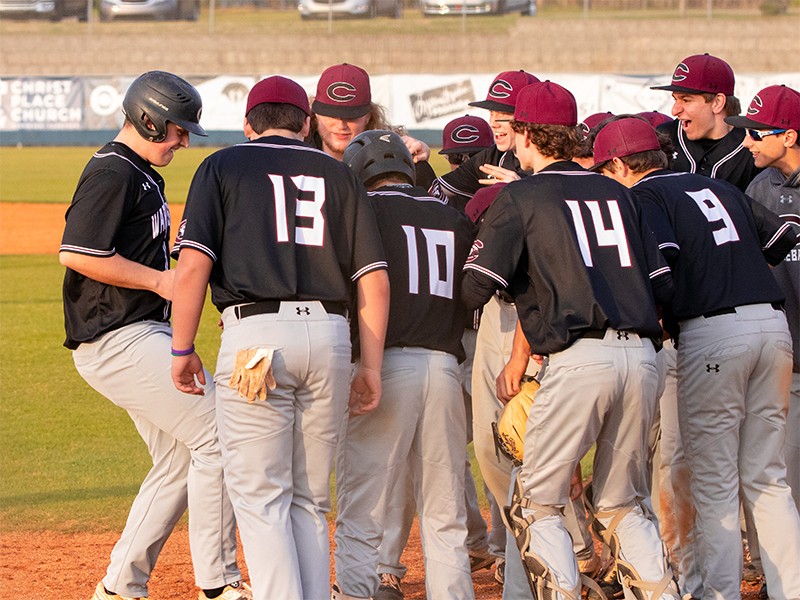 OAKWOOD — The Chestatee baseball team scored eight runs on nine hits to take the Region 7-4A victory over the Spartans, 8-1, Friday afternoon in Oakwood.

The War Eagles scored three runs in the third and one each in the fourth, fifth and sixth innings.

Will Cantrell only allowed one run on four hits and struck out eight in the complete-game win on the mound for the War Eagles.

Will Cantrell and Caleb Carter drove in one run each for the War Eagles.

The Lakeview baseball team scored five runs early to knock off George Walton Academy in a battle for the top spot in Region 8-A Friday afternoon on the road.

The win lifted the Lions to the top of the standings.

Andrew Estes earned the win on the mound, giving up five hits and striking out eight in the complete game performance.

The Lions scored one run in the first and four in the second, giving them a cushion for the next five innings.

Ian Echols’ two-out single in the top of the first inning drove Estes home to go up, 1-0.

In the top of the second, Parker Allen and Conley Millwood walked home, Holden Cooper scored off an error and Echols drove in Estes on a ground out to third.

Estes, Skyler Thellman, Sam Stewart and Cooper drove in runs for the Lions. Echols finished the day with two RBIs.

Caleb Wiley’s two-RBI triple in the top of the sixth inning propelled North Hall past East Hall Friday afternoon on the road.

Wiley’s game-winning triple scored Dylan Wiley and Caleb Clark to break the tie game. East Hall left two runners on in the bottom of the inning.

North Hall opened the game with four runs in the top of the first inning and one in the second to take a 5-1 lead.

East Hall, however, scored one run in the third then erupted for three runs in the bottom of the fifth inning.

Luke England doubled to left field scoring Levi Howard and Luke Holtzclaw. Mikey Parker singled the next at-bat and Zach Kinsey drove England home on a double-play grounder. The runs tied the game, 5-5 after the fifth.

England was 2-for-3 with 3 RBIs. Taylor Smith, Mike Matuska, Parker, Alex Brooks and TJ Smith all recorded hits for the Vikings.

Wiley led the Trojans at the plate with a 3-for-4, three RBI day. Jackson Dyer was 2-for-3 with two RBIs. Tyler Brooks also drove in two runs.

Jack Wiley snagged the win in relief, allowing three runs on six hits in three innings of work. Dyer started the game and pitched four innings. He gave up one earned run on four hits and five Ks.

East Hall (1-8, 2-14) will play travel to Greater Atlanta Wednesday for a doubleheader. The series starts at 3 p.m.

Despite out-hitting Marist 14-9, the Warriors only crossed the plate three times, falling to Marist in the Region 7-4A battle on the road Friday afternoon.

The Warriors had eight players with one or more hits on the afternoon.

J. Ben Haynes led the day at the plate for the Warriors. He was 3-for-4 with one RBI. Riley Norton and Austin Payne were 2-for-4 with an RBI.

Marist scored two runs in the second and four runs in the fourth to jump out to a 6-1 lead.

The Warriors scored a run in the third and fifth and one in the sixth.

East Jackson scored three runs late to beat Region 8-3A foe Franklin County in game one and held off the Lion rally in the second game of the doubleheader to sweep Friday's action at home.

In game one, the Lions took the lead, 4-2, in the third inning but East Jackson hammered out two runs in the bottom to tie the game.

The Eagles took the lead, 5-4,  in the fifth inning when Caleb Adair scored off a passed ball at home plate. They scored two more in the bottom of the sixth inning off a double by Adair that drove home, Josh Compton, then Jake Varner scored off an infield error the next at-bat.

East Jackson’s defense sat Franklin down in order in the seventh inning to seal the game.

Compton earned the win, giving up four runs on six hits and four strikeouts. Cole Sealey picked up the save pitching one and two-thirds innings, allowing no hits and one K.

Dylan Varner and Braxton Standridge each drove in a run.

In game two, the Eagles scored five runs in the first inning to take a 5-0 lead. They scored another run in the bottom of the second, three in the fourth and one in the fifth.

Franklin scored three in the third, one in the fourth, fifth, sixth and seventh.

The Dragons swept the season series against Hart County to remain undefeated and tied with Morgan County for the top spot in Region 8-3A.

In game one of the doubleheader Friday afternoon at home, the Dragons scored one run in the third and two in the sixth to shutout the Bulldogs.

Derek Vaughn earned the win on the mound, allowing four hits. He struck out three.

McEver drove in two runs on a 1-for-3 day at the plate. Elegreet had one RBI.

Brycen Jewell was the winning pitcher, going six innings. He allowed three hits and struck out six. Rem Maxwell pitched on an inning, striking out two.

Ryan Godfrey was 2-for-3 with two RBIs and Lane Watkins went 3-for-3 with one RBI to lead the Dragons at the plate.