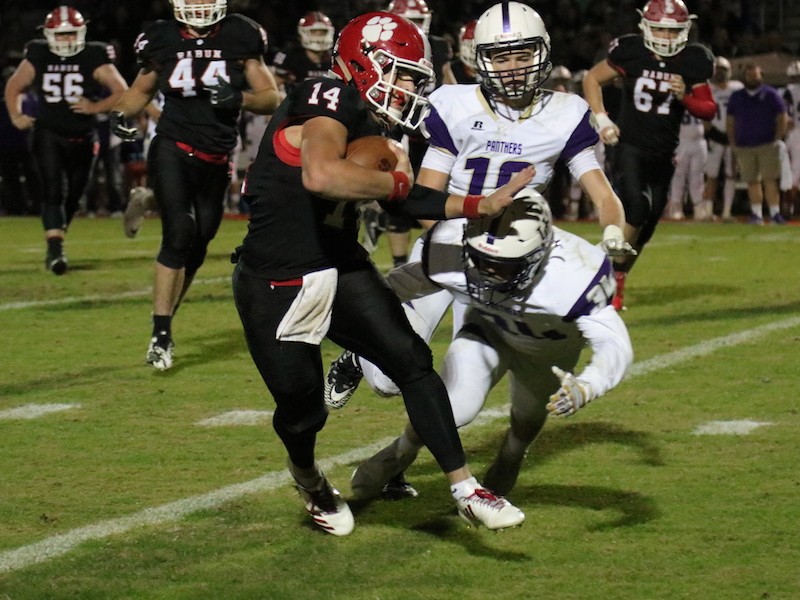 The Wildcats came in with Class 2A's top offense. The Panthers were third, and both figured to put the defenses to the ultimate test.

But in the pivotal second and third quarters, the Wildcats started five possessions inside Union County territory -- set up by several short punts into a brisk wind and two turnovers -- scoring touchdowns on all five as they blew open a 14-14 tie for a 49-21 lead en route to the win.

It was the fifth consecutive region title for the Class 2A second-ranked Wildcats (9-1, 7-0 Region 8-2A). Union County (9-1, 6-1) will take the No. 2 seed from Region 8-2A into the first round of next week’s playoffs. Both teams will play host in the first round but will have to wait until Saturday to see which Region 5-2A teams they will draw.

“Field position always plays a part but I thought our guys just really executed well after the first couple of possessions,” Rabun County coach Lee Shaw said. “This is just awesome for our program. This senior group just tied last year’s senior group for most wins in program history (45) so now we’ll go see if we can break it next week.”

It was the Panthers, however, who started with a bang. They stopped the Rabun offense on downs on the opening drive of the game and just two plays later Pierson Allison connected with Chad Buzzard on a simple slant that turned into a 49-yard sprint outracing two Rabun defenders for a touchdown and a quick 7-0 lead.

Union County then looked to snag the first big play when Alec Scott intercepted Rabun freshman quarterback Gunner Stockton and returned it to the Rabun 5. But a block-in-the-back penalty on the return pushed it back to the Wildcats 34. The Rabun defense stiffened and a Brian Smith 54-yard field goal dropped just short.

Shaw said they never flinched with their freshman quarterback.

“I just told (Gunner) that is was okay and to just forget it and go out there and play,” Shaw said.

The Wildcats answered on their third drive. After a 52-yard screen pass for a score was negated on a clipping call, Stockton found Braxton Hicks on a 29-yard pass and three plays later Austin Jones scored on a 6-yard run to tie the game late in the first quarter.

Both defenses held on the next possessions but the Panthers were pinned back to their own 1 after a 57-yard Rabun punt with the wind. The Wildcats forced a quick 3-and-out and a short Union punt into the wind was returned to the Panthers 2 by Jones, which set up a 2-yard Brison Beck TD run on the next play for a 14-7 Rabun lead.

Union County did answer with an 80-yard drive, capped by a 14-yard TD pass from Allison to Kyle Morlock with just 3:54 left in the half, to tie the game.

But Stockton and Hicks struck for a 37-yard touchdown pass and after the Wildcats defense forced another short Union County punt, Stockton capped a quick 5-play drive with a 5-yard TD run to push the lead to 28-14 by halftime.

“Gunner and the whole team have just gotten better as the season has gone along and I really thought they executed what we wanted to do,” Shaw said.

The Panthers had a chance to trim the Wildcats lead getting the kickoff to start the third quarter. But Allison was stripped on a scramble run on the opening play and the Wildcats made them pay.

Stockton capped a short 3-play, 26-drive with a 6-yard run, the first of three rushing touchdowns in the quarter, for a 35-14 lead. He added scoring runs of 10 and 21 as the Wildcats exploded for a 49-14 advantage.

The other two drives came after the Rabun defense forced consecutive 3-and-outs that were followed by short punts into the wind. Allison and the Panthers temporarily stopped the tide with a 43-yard touchdown pass to Sawyer Drake to cut the lead to 49-21 but that was as close as they could get.

“To me our defense was the real story. We told them if (Union) can’t score, they can’t win. They did a great job against a very good offense,” Shaw said.