After the Georgia High School Association reclassification in 2021, Region 8-5A had teams move up and down with four of the seven teams in the newly-constructed region being new. That was to be expected.

On paper, the additions of Region 8-4A playoff teams Jefferson and Flowery Branch, along with Class 6A teams Winder-Barrow and Heritage-Conyers, figured to give it some instant flair, and competition.

But in 2021, Region 8-5A was not one of the power regions in Class 5A with only Clarke Central, the three-time defending region champ, and Eastside, finishing the year with winning records and only the Gladiators getting past the second round of the playoffs.

So far, 2022 looks like a completely different story. The region as a whole went 18-11 in non-region play, and all but one team -- surprisingly, Clarke Central -- went .500 or better over the first five weeks.

Loganville, which finished 4-6 in 2021 and did not make the playoffs, is undefeated (5-0, 1-0 Region 8-5A) and opened its region schedule last week with a win over Winder-Barrow. The rest of the region gets under this week.

And right out of the gate, the top four AccessWDUN and Friday Game Night preseason poll playoff favorites will square off against each other to shed some instant light on where things could be headed.

Both games will show who will still be region-title front-runners and who will be playing catch-up to get back in the region title race.

New Jefferson coach Travis Noland, who expected a dogfight in the region before the season began, has not changed his tune.

“There are some great teams in this region. I don’t think it’s been getting the respect that it deserves,” Noland said this week. “I’m not surprised about Loganville. Eastside has been a very good program over the years. Flowery Branch has been a playoff team for several years. And Clarke Central is better than their record.

Flowery Branch is no stranger to its new home having been in 8-5A for seven seasons from 2012-17. The Falcons' matchup with the Eagles in Covington is the first of four consecutive weeks against the other four top-five projected teams.

First-year Falcons head coach Jason Tester was quite frank on his assessment of the new region.

“This region is no joke. Right now, I think anyone can beat anyone,” Tester said. “Jefferson is still Jefferson and Clarke will always be Clarke. Loganville is putting their talent together this year, and Eastside, I used to coach there, is playing fast and confident. This may be one of the best regions in the state right now.”

The Falcons have been up-and-down so far. They opened with two wins but have dropped two straight and are 1-1 on the road.

Tester said they are ready for a new start.

“It’s a clean slate for everyone, including us, so now is the time to start playing your best football,” he said. “Every goal we have is still attainable and that’s how we’re going into this.” 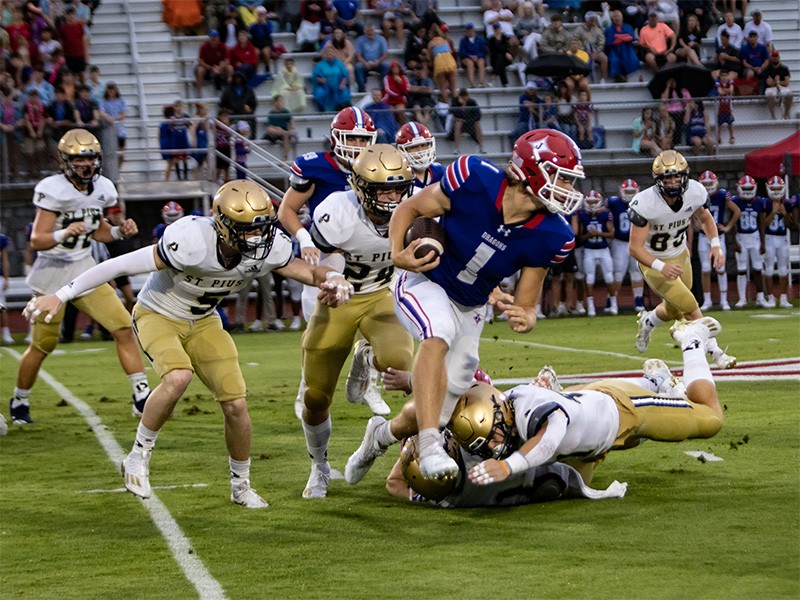 Jefferson junior running back Sammy Brown (1) will lead the Dragons into their Region 8-5A opener on Friday against Clarke Central in Athens.