5 Things: What we learned from Week 10 of high school football 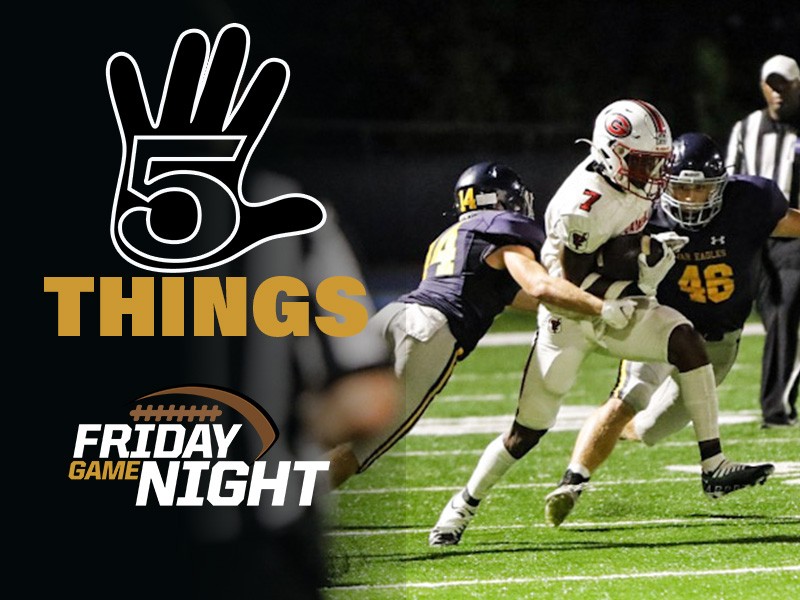 Some blowout wins and surprising results helped move us one step closer to the state playoffs Friday night.

Here are five things we learned in Week 10:

1. Jefferson is peaking at the right time

There were plenty of excuses for this Jefferson football team to not be where they are right now - standing alone at the top of the Region 8-5A standings and looking like one of the top teams in the state heading into the playoffs in a few weeks. The Dragons had a head coaching change that included a complete change of offensive style, started the season at just 2-2 and suffered the tragic death of a teammate earlier this month. However, through it all they have continued to improve and they now look like they're playing their best football of the season right now. It's a good time to be doing so with the playoffs just two weeks away. Jefferson hosted previously undefeated and fourth-ranked Loganville Friday night at Memorial Stadium and dismantled them 42-6. The game was never in doubt after the midway point of the second quarter with the Dragons (6-2, 4-0) leading at one point 35-0 in the third. Their defense looks almost inpenetrable, only allowing 22 combined points in their last six games with three shutouts. The offense is improving as well, with junior star Sammy Brown finding his comfort zone in Travis Noland's system, racking up more than 300 total yards and six touchdowns Friday. Overall, it's looking like a completely different team than the one that lost its season opener to Alpharetta just a few months ago.

2. It's not looking ahead anymore - Gainesville-North Forsyth and Dawson-Lumpkin now set for region title showdowns

One of the biggest things any coach tried to guard his team against is looking ahead. They try to never allow a looming matchup several weeks away to distract their players from the next opponent on the schedule. That's what Josh Niblett, Robert Craft, Sid Maxwell and Heath Webb have had to do for what feels like a month now. With Gainesville and North Forsyth looking like the clear top two teams in Region 8-6A and Dawson County and Lumpkin County looking like the same in 7-3A, many in the area couldn't help but wonder about their head-to-head matchups coming up late in the regular season. Now those coaches no longer have to "block out the noise" and everyone can focus on those showdowns because they are here and they are what most thought they would be: defacto region championship games. The Red Elephants (8-0, 4-0) will host the Raiders (6-2, 4-0) in City Park this Friday with both teams unbeaten in region play. The winner will take home the 8-6A trophy. Up in Dahlonega, the Indians (7-1, 3-1) will host the arch-rival Tigers (7-2, 5-0). If Dawson County wins, they win the title outright. A Lumpkin win would put them just one win away from the region championship, with only a home game against last-place West Hall standing in their way. Both should provide plenty of fun both on the field and in the buildup leading up to the games.

3. Buford's tough schedule has them ready for more in 7A

After Buford's win Friday night, Wolves head coach Bryant Appling said this has been the toughest schedule his team has faced in his time there. That's quite a statement coming from a man who has been with what is one of if not the premier program in the state for nearly two decades and has seen all sorts of titanic regular-season showdowns in that time. It's hard to argue with though. Buford (8-0, 3-0 8-7A) has faced out-of-state powerhouses like Thompson of Alabama and Mallard Creek of North Carolina. They faced one of the top teams in Georgia's Class 3A in Carver of Atlanta. They faced 7A powers North Cobb and Marietta. In their own region, they've had to battle defending state champion Collins Hill and nationally-ranked Mill Creek. Those games can make a matchup like Friday's against Dacula seem lackluster by comparison. The Falcons are a talented 7A school in their own right, but Buford showed Friday how far they've come through that brutal schedule, as they rolled past Dacula 50-7 at Tom Riden Stadium to stay unbeaten on the year. The Wolves are one win away from a region title in their first year in the state's highest classification and they look primed to make a run at the state title as well.

4. East Forsyth and North Hall could be down to their final strikes in 8-4A playoff race

So, you want to make the playoffs in Region 8-4A? Be warned, it's a marathon and not a sprint. East Forsyth and North Hall have learned that in very different ways over the past six weeks and both now find themselves firmly on the bubble with just two weeks to play. The Broncos looked close to a shoe-in to make the postseason in just their second year as a program after a 5-1 start overall and a 3-1 start in region play. But that's the trap of playing in a 9-team region: the Broncos were only halfway through their region schedule. They've now lost back-to-back region games and have slid from a tie for second place down to fifth after a home loss to Madison County Thursday. North Hall has been going the opposite direction on the ladder. The Trojans started the season 0-3 and 0-1 in region before rallying to win three of their last five games and now find themsleves tied with East Forsyth in the standings. Only two games separate second place and seventh in 8-4A right now and that's noteworthy as there are two weeks left in the season. Now the Broncos and Trojans look to be down to their final strike. North Hall hosts Cedar Shoals at the Brickyard this Friday while East Forsyth travels to Chestatee. Both teams need to win, and if they do, it could set up a showdown between the two for the final playoff spot in the region. Get your popcorn ready for a run finish in 8-4A.

Union County has seen a major resurgance in the second season under head coach Michael Perry. The Panthers are off to their best start in four years and have already secured a playoff spot in Region 8-2A. In fact, they are still unbeaten in region play after scoring a late touchdown to rally past an also-resurgant East Jackson team Friday night 21-17. Now, with the bottom three teams in the region standings-wise all behind them, the question shifts to whether or not these Panthers (7-1, 3-0) are ready to contend for the region title. It will come down to their last two games, as they face off with the two preseason favorites to win the region: private school powerhouses Fellowship Christian and Athens Academy. Union County will travel to Athens to face the Spartans this week and then end the regular season by hosting the Paladins in Blairsville. The program hasn't seen a region title since 1973 and it's going to take a great effort to do so this season. But, all you can ask for is a chance to control your own destiny, and that's exactly what Union County has as the 2022 regular season wraps up.

(Flowery Branch and North Hall were off)