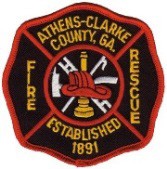 Approximately two dozen people were injured when the first floor of an Athens home collapsed into a crawl space early yesterday morning.

An estimated 500 people had gathered at the home at 172 Magnolia Bluff Drive for a party, according to a press release from the Athens-Clarke County Fire Department. Fire personnel were called out to the scene just after 1 a.m.

Upon arrival, fire units had a hard time reaching the home because of how many cars and people were blocking the street. Athens-Clarke County police were already at the scene helping to remove people from the home.

First responders were able to rescue everyone from the crawl space and checked to make sure that no victims were hidden. Twenty-five people reported injuries, which ranged from scratches and cuts to a possible broken arm.

No patients required EMS transport. Some said that they would either drive themselves or have a friend drive them to the hospital.

"Many times, overcrowding can result in collapses of decks and flooring, especially in older structures. The thing that helped, in this case, was the lack of elevation", says Moss. "These folks should consider themselves fortunate".

An assessment of the home recommended it unsafe for activity and code enforcement was contacted to see if the property should be condemned.