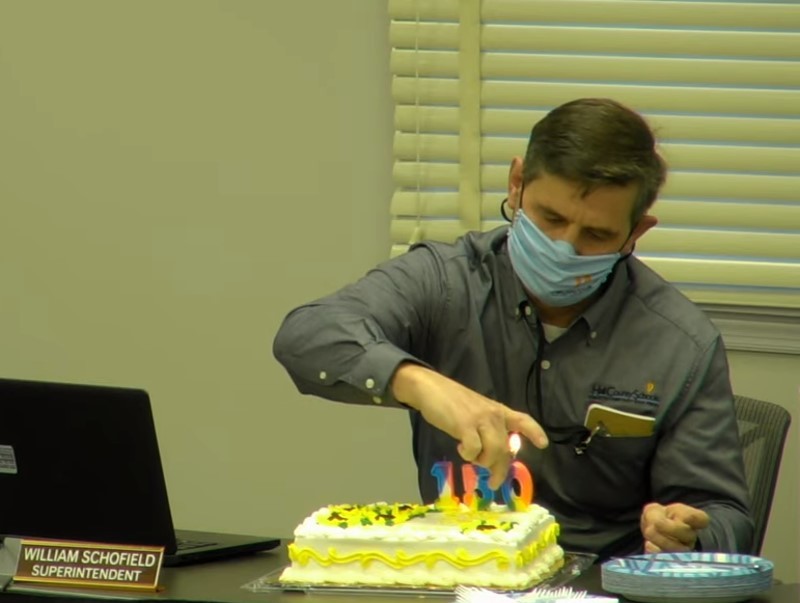 Hall County School District Superintendent Will Schofield lights the candles on a cake for a school board celebration of the district's 150th birthday. 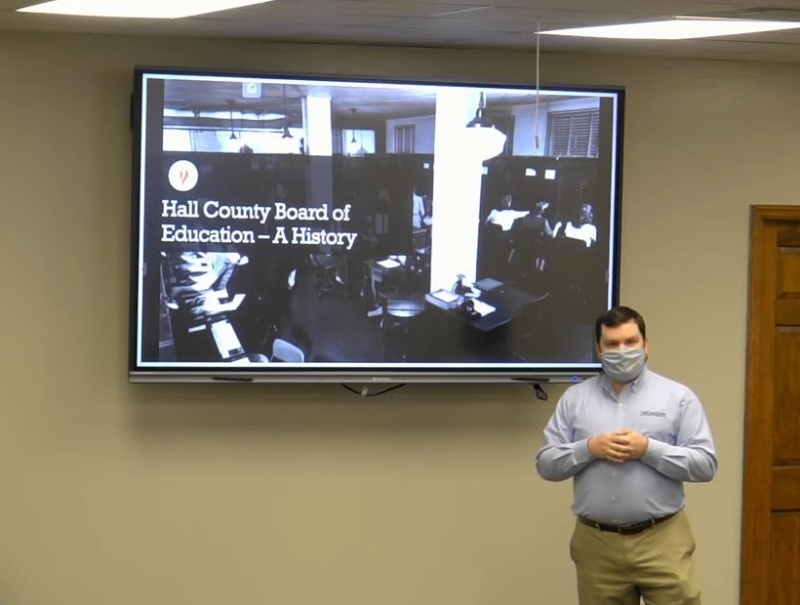 The Hall County School District reached a milestone on Feb. 7, and school board members held an impromptu celebration at a work session Monday evening, commemorating the district's 150th birthday.

While board members enjoyed some birthday cake, Finance Director Jonathan Boykin, who has taken on the unofficial role as district historian, offered up a quick history lesson, telling the board that Hall County was one of the first counties in the state to set up a board of education in 1871, electing Brian Moses as president at the first meeting on Feb. 7. In those days, the school board would oversee the certification of teachers as well as levy taxes for the school district. Each school had its own board of trustees - made up of parents or community members - and that board would decide which teachers to hire and what subjects each school would offer.

In a Tuesday morning interview on WDUN's Mornings on Maine Street, Superintendent Will Schofield said Hall County leaders made education a priority early on, and he thinks the premise they followed is applicable today.

"Literally, there was a time in this nation - and I try to remind my educational colleagues of this - where public school meant moms and dads and aunts and uncles...got together, pitched some money in a hat and said we need to hire a teacher so we can teach our children the skills that they need to be successful in the future," Schofield said.

The forming of boards of education for public schools didn't become common in Georgia until after Reconstruction, so Hall County was a pioneer, according to Schofield.

Boykin told board members about some of the artifacts locked away at Central Office from the early days of the school district - roll books, for example. Schofield said he's hoping those items might some day be turned over to The Northeast Georgia History Center in Gainesville, so the entire community can share the history of local education.

"We actually have some documents dating back into the 1850s of individuals when they...would sign up for the $2 of tuition, or whatever it was going to be for that year, to have the one-room schoolhouses," Schofield said. "It's fascinating to look at some of those documents...we really do need to pass those on to the history center."

From that first meeting in 1871 - where the only order of business was to elect a board president - the Hall County School District has grown to 37 schools with 35 programs of choice with 28,000 students and 3,400 employees.

Hall County School District Superintendent Will Schofield talked with WDUN's Bill Maine about the the district's 150th birthday. You can hear the entire interview by the clicking on the audio player to your left.