Logano expects clash with Keselowski to blow over 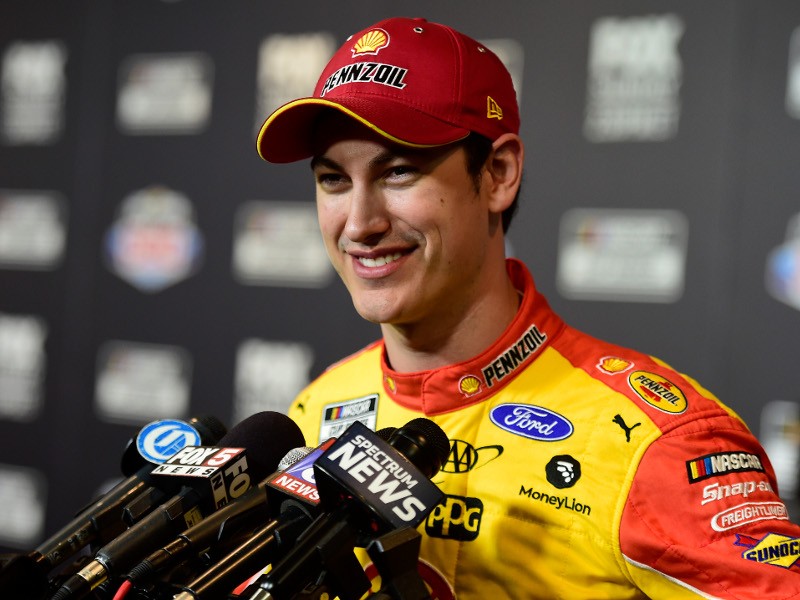 DAYTONA BEACH, Fla.  – In the aftermath of the first major wreck in last Sunday’s Busch Clash at Daytona, Brad Keselowski was far from charitable when assessing the blocking attempt by Team Penske teammate Joey Logano.

As the cars roared through turn 4 on lap 66, Logano blocked the Toyota of Kyle Busch, who had a run on Logano’s No. 22 Ford. A tap from the nose of Busch’s car turned Logano sideways and triggered the six-car wreck.

Keselowski’s Ford was collateral damage in the crash, his mangled car eliminated from the race. After a mandatory trip to the infield care center, Keselowski characterized his teammate’s blocking attempt as “dumb, dumb, dumb.”

Keselowski and Logano both visited Disney World with their families the day after the season-opening NASCAR Cup exhibition event at Daytona International Speedway, but they didn’t see each other there.

“We didn’t run into each other there,” Logano said on Wednesday during Daytona 500 media day interviews at the speedway. “It’s a big place. “There’s a lot of people there. Oh, my God, there are people everywhere there!

“I figured we would run into each other at some point, but we never did. It’s a big place.”

However, Logano and Keselowski subsequently discussed the incident.

“We’re going to have different opinions on a lot of things all the time,” Logano said. “That’s part of racing and things like that, but I think we’ll be fine… There are different perspectives on the whole thing, and I had no clue. I was like, ‘Hey, what are you mad about? Let’s talk about it.’ There were things that I had no idea about, and I just explained my side of the story. That’s all you can really do. I think once he understands the whole side of the story…

“And you know how it is, you get out of the race car, you’re frustrated, you’re mad, your emotions are running high, you haven’t re-watched anything yet, and they stick a microphone in your face and ask you what happened. You don’t really know until you go back and study it and figure it all out. That stuff happens, but, like I said, we’ve been friends for a long time.

“I’m not really that worried about it. It’s going to be OK. We’re going figure it out. Everything always blows by. Everything gets better all the time.”

Cole Custer, 22, is one of six drivers in a highly-heralded, much-decorated 2020 NASCAR Cup Series Sunoco Rookie of the Year class. Custer, who will drive the No. 41 Stewart-Haas Racing Ford, has finished championship runner-up the last two Xfinity Series seasons and is making the move into NASCAR’s big time with some of his former and fiercest Xfinity Series rivals.

“I think it’s nice to just kind of have everybody in the same boat,” Custer said, allowing a smile. “Everybody is in the same situation, but at the time same time, you’re racing 38 other guys out there, so it’s a matter of focusing on yourself and doing what you need to do to get better and focusing on your own plan. I can’t be focusing on those two or those three trying to figure out what they’re doing.”

Instead, Custer said he’s trying to soak up as much information as possible from his three teammates – 2014 Cup Series champion Kevin Harvick, former series runner-up Clint Bowyer and veteran Aric Almirola. All three of those drivers qualified for the 2019 Cup Series Playoffs.

“If I can get advice from any of those guys it’s going to be huge. You just try to be a sponge as much as you can.”

He was 14th fastest in Sunday’s Daytona 500 Pole Qualifying session – second best among the rookie drivers. Longtime NASCAR rival Christopher Bell posted the top speed among the six rookies – with a lap, ninth fastest in the No. 96 Leavine Family Racing Toyota.

The rookie class will be evenly divided among the two Bluegreen Vacation Duel races on Thursday. Bell, John Hunter Nemechek and Quin Houff will be in Duel 1. Custer, two-time Xfinity Series champ Tyler Reddick and Brennan Poole will race in Duel 2.

Although he was still one lap down at the end of Sunday’s Busch Clash at Daytona, Denny Hamlin’s No. 11 Joe Gibbs Racing Toyota was fast—fast enough to push the heavily damaged No. 20 Camry of teammate Erik Jones to the win.

But Hamlin offered a word of caution to those who might be expecting a similar denouement at the end of Sunday’s Daytona 500.

“The difference would be that his car was so damaged, it was pushing his car back into mine,” Hamlin said. “He had such big nose damage, it kept our lock tighter than what it normally is. If you have two cars that are pretty healthy, that lock is not as strong.

“That’s not to say I won’t be seeking out wrecked cars when it comes down to the end of it, if I’m still around. It was something special which I linked up there, I knew he was in for a ride as long as he held on.”

Jones held on for the win, but just short of the finish line, Hamlin left the back bumper of Jones’ Toyota. There was speculation that defending Daytona 500 winner Hamlin might be practicing a move for Sunday’s race.

“No, I would have made the move much sooner,” Hamlin demurred. “I didn’t want to get in his checkered flag photo. I was just trying to get out of there.”

The front roof pillar will carry Andretti’s name, an homage to the popular driver who passed away Jan. 30 after a long, valiant battle with colon cancer. Andretti drove for Petty in the 1998-2003 seasons earning a victory at Phoenix in 1999.

Bryant, a perennial All-Star, played for the Los Angeles Lakers and was killed along with his daughter and seven others in a helicopter crash in California on January 26.

Wallace said it was a “given” that the team would honor its former driver Andretti, a popular competitor both in and out of the race car. And Bryant was a particular favorite of Wallace’s.

“I was going to put his name where my name was on the door, but then we were like, we need to honor every single person there and I agreed with that,” Wallace said following last weekend’s pole qualifying session. “We decided to come up with a cool decal. …It offsets from our Air Force scheme, but just a lot of people riding with us for the 500 on Sunday.”

A few days later, Wallace was optimistic that the decals and his brief record in the Daytona 500 may provide just the positive vibe to get the season off to a promising start. He finished runner-up in his Daytona 500 debut in 2018 and said he dreamed Wednesday night that he drove the No. 43 Richard Petty Motorsports Chevrolet into Daytona’s Victory Lane after the 500, although those dream details were a little murky.

“I’d say if I won the race, I should remember,”’ Wallace said smiling. “We crossed the line and I’m like, ‘Yeah, we just won. Cool. We’re in the Playoffs.’