Game of the Week: Branch-Jefferson collide in top-10 Region 8-4A opener 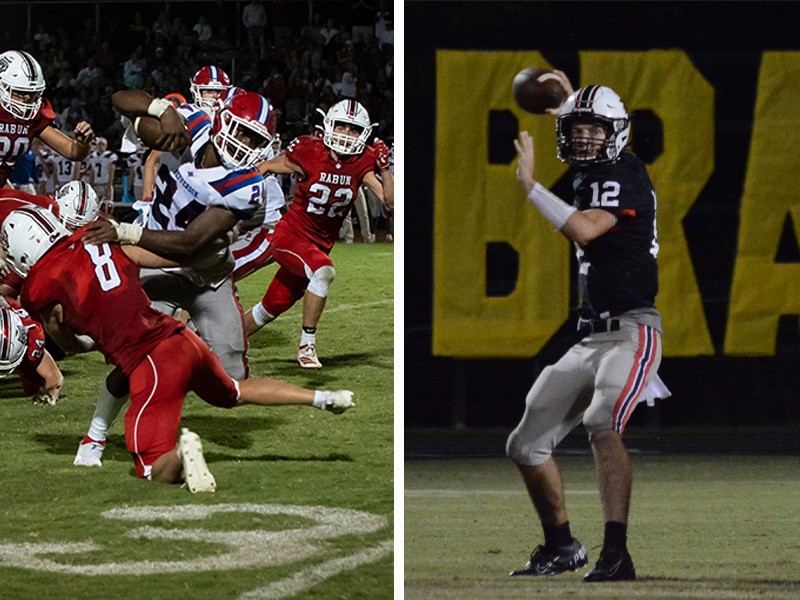 FLOWERY BRANCH — This game has been circled in bright red ink since the schedule was released in March.

“When you play and coach at a place like Jefferson, the biggest game is always the one right in front of you,” Jefferson coach Gene Cathcart said. “This one clearly has region implications and is between two ranked programs, but we try to condition our players to understand any game Jefferson plays in is a big football game.”

There’s no doubt this game is huge for both programs. It could, potentially, put the winner on the path to the region title and the No. 1 seed in the Class 4A playoffs.

But Flowery Branch coach Ben Hall says even though it could put the winner in control of its destiny, it doesn’t necessarily crown the region champ.

“It is a big game, the first region game,” Hall said. “I tell you the team people are sleeping on in our region is North Oconee. They’re sitting there without a win, they’ve played some tough, tough people and have a Clemson-commit at quarterback (Bubba Chandler), so I’m not going to crown the winner of this game the region champs. But it does put you in the driver’s seat, and that’s a position we would love to be in. We’re going to have to play our best game by far and continue to grow.”

It’ll be a major clash of styles with Jefferson averaging 400 yards per game on the ground in its spread-option attack led by Power 5 recruit junior quarterback Malaki Starks (7-24-2, 225 passing yards, 4 TDs; 52-513 rushing yards, 7TDs) and a steady rotation of running backs.

“Malaki is a player, and he is learning every week at quarterback,” Cathcart said. “We put so much pressure on him and Carter (Stephenson) and all our quarterbacks in this offense and it has been so impressive to watch how quickly he is progressing through his learning curve.”

Kolton Jones leads the charge out of the backfield with 16 rushes for 221 yards and a touchdown. Reese Johnson (31-161, 1 TD) and Jordan Perry (20-177, 1TD) have been a threat at running back as well. The Dragons have rushed 15 different running backs this season and eight of those have crossed the goal line at least once.

“Malaki Starks is one of the premier players in the nation, not only in northeast Georgia … he touches the ball every play,” Hall said about Jefferson. “You just kind of hold your breath and hope you can contain him, but then the players around him make Malaki better. They do a good job of taking advantage of the teams that close in and key on Malaki, and they’re going to get it pitched and those guys can take it to the house. So, his surrounding cast makes Malaki very dangerous.”

“David is playing very well,” Hall said. “His receivers are helping him out. Sal, Baxley, Conner, Ryan Lusco -- they’re playing with a lot of mojo right now, and it’s fun to watch.”

Also mixed in is a solid rushing attack from senior running back Jaizen Ellingham with 45 carries for 232 yards and eight touchdowns, but Ellingham sat out against Gainesville two weeks ago and was limited last week with an injury. Sophomore running back Myles Ivey, however, picked up the slack, rushing 54 times for 205 yards and touchdown, including a 124-yard performance last week against Hiram.

“They do a great job and probably the most underrated aspect of it all is how good they are upfront,” Cathcart said about Flowery Branch. “They protect their quarterback so well, play very physically, and their O-Line is exactly what you would expect from a Cris Warbington and Ben Hall offense. Their quarterback is playing very well, and the receivers do an exceptional job and their running back was rated as a preseason top running back in Class 4A, so they clearly present a great challenge to our defense.”

Defensively, the Dragons, until a late fourth-quarter surge last week by Hart County, had been nearly impenetrable, allowing just 28 points (9.3 ppg) over its first three games.

Branch’s defense has been retooling with its youth but has gotten better each week. After giving up 40 ppg in their first two games, the Falcons have allowed just 29 points in the last two contests.

It’s all part of the keys to the game for both sides.

Hall says the Falcons will need to tackle better this week to have a chance to slow down Jefferson.

"We're going have to tackle better than we've tackled all year," he said. "With all the athletes that Jefferson has, if you miss a tackle, they'll take it the distance. We have to be focused and tackle well and adjust to their formations and be aware of what they’re trying to do with the quarterback each play. Offensively, we're going have to be able to run the ball. I know David has been throwing the ball, but we are really just taking what people are giving us. If it takes us lining up and running ball 50 times, we’ll line up and run it 50 times.”

Cathcart also pointed to his defense but also said eliminating penalties will also be a large part to success.

“For us to continue to play well on both lines of scrimmage, distribute the ball well and read and take what we are given on offense,” he said. “We need to continue to play physical and tackle well on defense and get back to playing mistake-free football on special teams. We committed way too many penalties last week. We had 13 in the previous three games and 12 last week, so we will have to do better in that area for sure.”

JEFFERSON at FLOWERY BRANCH
-- WHEN: 7:30 p.m.
-- TICKETS: Pre-sale only at each school; 40 percent capacity
-- WHERE: Falcons Field, Flowery Branch
-- RADIO: WDUN AM 550
-- JEFFERSON (4-0, 0-0 Region 8-4A): Ranked No. 2 in Class 4A; defeated Hart County 26-19 last week
-- FLOWERY BRANCH (3-1, 0-0 Region 8-4A): Ranked No. 8 in Class 4A; defeated Hiram 34-7 last week
-- COVID PROTOCOLS: Mask/face coverings and temperature will be required to get into the stadium. Concessions will be prepackaged.
-- NOTABLE: Jefferson leads series 2-0. The Dragons won 35-29 in 2017. ... Many that follow this region predicted that these two teams were the preseason favorites to win the region title. So, the winner of this one will hold the hugely-important head-to-head tiebreaker. ... Expect it to be a tremendous clash of styles as Jefferson is averaging nearly 400 yards a game on the ground in its triple-option attack led by Malaki Starks and Kolton Jones. Flowery Branch is paced by the state's leading passer in David Renard (1,290 yards) and a slew of receivers, led by Connor Larson (9th in state last week) but also has one of the area's top running backs in Jaizen Ellingham. ... The Dragons defense, until a late fourth quarter surge last week by Hart County, had been nearly impenetrable, allowing just 28 points 9.3 ppg) over its first three games. A young Branch defense has gotten better each week. After giving up 40 ppg in their first two games, the Falcons have allowed just 29 points (14.5 ppg) in their last two contests. ... This one may be decided by whichever defense can hold up best under the pressure. ... Only three teams -- Jefferson, Branch, and East Hall -- have winning records so far in 8-4A, and the Dragons, who play host to the Vikings next week, have a chance to take quick command of the region if they can sweep their first two region games.