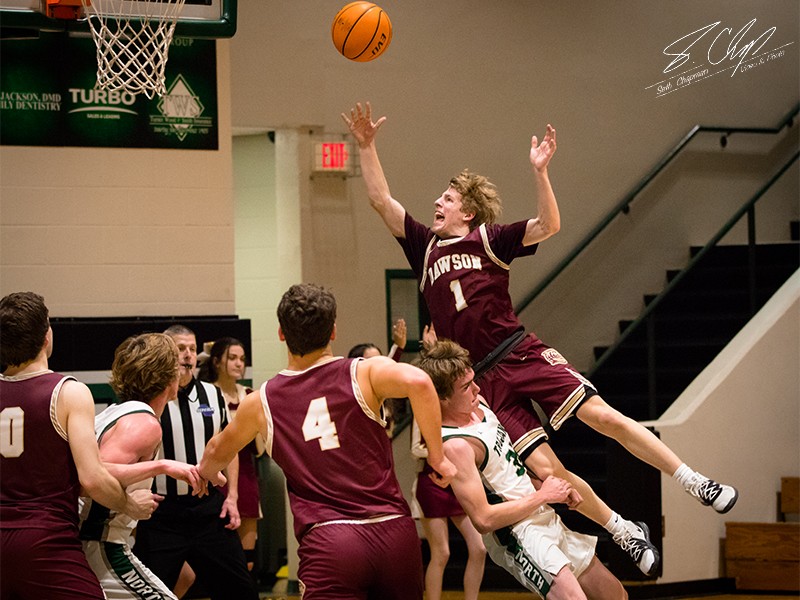 Dawson County's Mason Barnes goes up for a shot during the Tigers' win over North Hall on Tuesday. Barnes finished with 10 points.
Photo/Seth Chapman 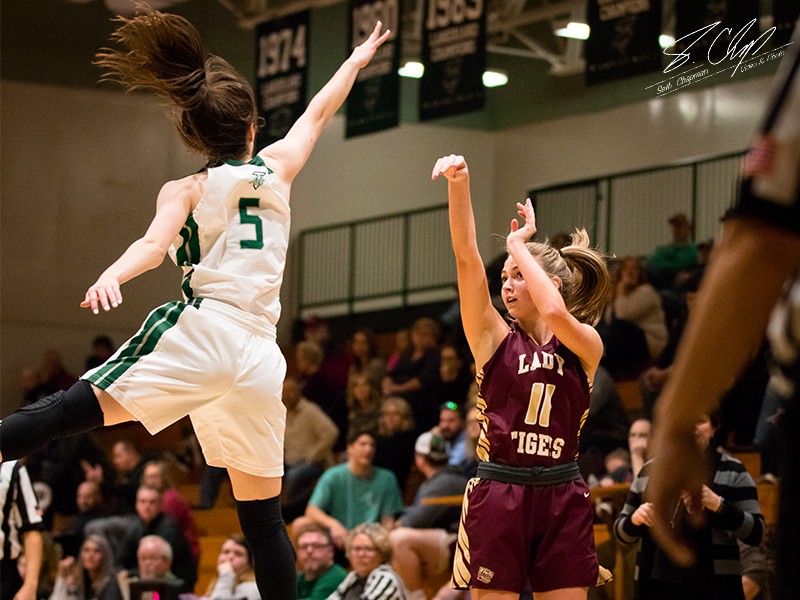 GAINESVILLE — After managing just 11 first-quarter points, the highest-scoring team in Class 3A was looking primed for an upset against Noth Hall.

But the cold-shooting start by No. 3-ranked Dawson County did not last long. The Tigers exploded for 20 second-quarter points and eventually pulled away in the second half for a 68-43 victory Tuesday at the North Hall gym.

North Hall, behind Clark Howell and Brock Cooper, traded baskets early and a Cooper bucket at the buzzer to end the first quarter made it just an 11-9 Dawson County advantage. But Campbell Reed, Tate Atkins, and Jasper Gibson drained five 3-pointers in the second period as they extended a slim 13-11 lead to 29-18 before taking a 31-20 lead into the intermission.

“We’re an explosive offensive team and we just had a slow start missing our first eight 3-pointers,” Dawson County coach Eric Herrick said. “But we came out in the second quarter and started hitting some shots. But for me, it’s more about defending and rebounding.”

Herrick got his wish in the first 75 seconds of the third quarter when the Tigers, who came in averaging just under 70 points a game, opened with an 11-0 run while forcing three North Hall turnovers in the process for a 42-30 lead. Dawson County maintained a 20 point lead the rest of the way.

The win kept the Tigers (20-2, 9-0 Region 7-3A) atop the region standings and gives them the most wins in Class 3A as well. But Herrick, despite the offensive firepower, continued to stress the importance of defense.

“That is really our focus right now,” Herrick said. “We feel like we have the offense to beat anyone in the state. But you have to be able to defend. I thought we did some good things (tonight) and that was good to see.”

Coupled with a Greater Atlanta Christian loss to Lumpkin County, the No. 9 Lady Trojans moved within one-half game of first place in Region 7-3A Tuesday.

North Hall (16-7, 7-3 Region 7-3A) played long-ball and some stingy defense. The Lady Trojans hit eight first-half 3-pointers and held Dawson County to just 11-second quarter points on the strength of a 15-5 run and a 9-0 run in the half. Grace Hollifield and Rylee McCall each hit three 3-pointers in the first half barrage.

The first quarter was a fast-tempo affair where the two teams combined for nine 3-pointers by six different players. But a McCall trey with 1:01 left in the opening period, answering a 3-pointer by the Lady Tigers’ Kirklyn Porter, gave North Hall a 16-15 lead, which would be the last of four lead changes in the game.

“We shot the ball real well and that was a big factor. But I really liked how we played defense tonight,” North Hall coach Kristi House said.

The Lady Trojans then used their first big run to take a 28-20 lead in the second pushed the lead 37-26. Dawson County, which trailed 41-29 at the half, never got closer than 10 the rest of the way.

McCall finished with 18 points to lead North Hall while Hollifield had 13 points and pulled down 8 rebounds. Lauren Swanson had 11 points and 9 rebounds and Maci Gillespie added 11 points and dished out 9 assists.

“What I saw the most out there was a lot of leadership,” House said. “We had girls doing things out there we’ve been wanting them to do all year. That was tremendous.

“We’re playing well right now and the goal is to not take a step back from this as we get ready for the (region) tournament. We’re excited about what this team can do.”