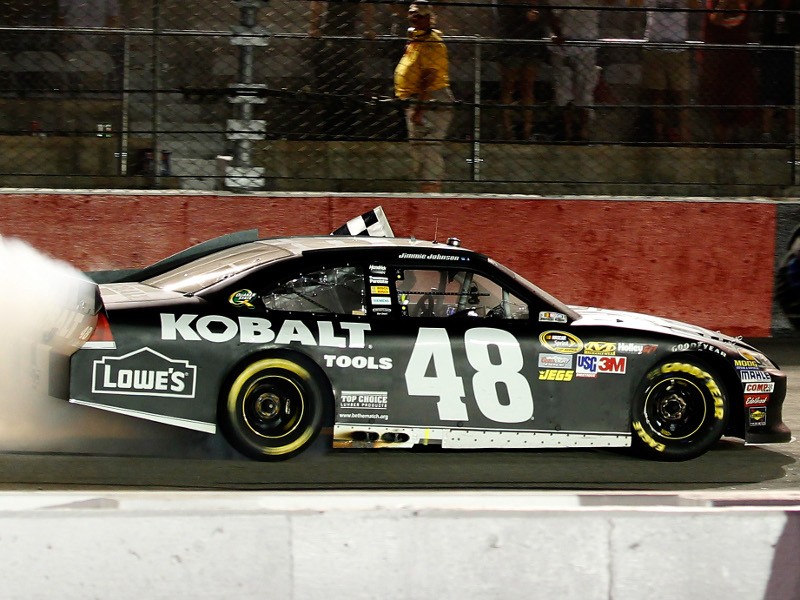 The best kind of Darlington Raceway throwback weekend for Jimmie Johnson would include a victory and his ticket to the 2019 Monster Energy NASCAR Cup Series Playoffs.

Johnson’s three victories at the notoriously tough 1.366-mile track is most among active drivers who will compete in Sunday evening’s Bojangles’ Southern 500 as are his nine top-five finishes.

But among the four drivers closest to earning the final two Playoff positions, the seven-time series champion has the highest mountain to climb – he sits farthest back in the standings. His No. 48 Hendrick Motorsports Chevrolet will be outfitted in a throwback version to his former off-road racing truck, however. And that won’t hurt the motivational mountain he must conquer.

With only two races left to set the 16-driver Playoff field – Darlington and next week’s regular season finale at Indianapolis Motor Speedway – Johnson is ranked 18th in the standings, 28 points behind third-year Cup driver Daniel Suarez, who currently holds that all-important 16th position.

Veteran Ryan Newman is ranked 15th with a 12-point edge on 16th place Suarez. Clint Bowyer is 17th, two points behind Suarez and 26 points up on Johnson. Among these four, Johnson is the only to have won previously at Darlington.

The month of September has been particularly rewarding for Johnson who has earned 10 of his 83 career victories in the month – second only to October, when he has 14 wins.

“Darlington just has its own persona,” Johnson said. “The Southern 500 has always been a spectacle to see. The track is so difficult and gritty to drive, it can tear you up pretty easy. It’s a long night and usually a hot one.

“The throwback theme is a great tribute to the personality and characteristics of Darlington, paying respect to the past. It’s always so much fun walking down pit road before the race. So many have just embraced the concept and go all-in.

“We know what we have to do and I am excited about the direction we have taken as a team.”

Johnson will be looking for his first top-10 since a third place in the Daytona International Speedway July race. His position in the standings is the lowest since mid-March, but Johnson has reason to feel confident at both Darlington and Indianapolis – two venues where he leads the field in victories. He’s never missed a Playoff berth in his 18-year fulltime career.

Suarez, who surpassed both his SHR teammate Clint Bowyer and Johnson last week in the standings, has an iffy track record at Darlington with finishes of 38th and 29th. Bowyer has only one top-10 finish in 13 starts – both he and Johnson retired early from last year’s race. Newman’s 10th place was best among this foursome in 2018.

Three To Go For NASCAR Xfinity Series At Darlington

With only three races remaining to set the NASCAR Xfinity Series Playoff field, Saturday’s Sports Clips Haircuts VFW 200 presents a great opportunity and an equally great challenge for the group of drivers still on the postseason brink.

And if that innate excitement weren’t enough, some of NASCAR’s biggest names will be joining the race field this week, including longtime Most Popular Driver Dale Earnhardt, Jr, who is making only his second NASCAR national series start since retiring from fulltime competition in 2017. And it comes only two weeks after he and his family survived a plane accident near Bristol, Tennessee.

Now an NBC television analyst, Earnhardt had a pair of top-10s in four previous Xfinity Series starts at Darlington. His best career finish in this race was runner-up in 1998.

“The Xfinity Series has been competitive this year with the young talent that is in the series right now,” Earnhardt said. “We’ll see how things go during practice and hope to be running with those guys on Saturday.”

Five-time race winner Denny Hamlin (No. 18 Joe Gibbs Racing Toyota) and Ryan Blaney (No. 12 Team Penske Ford) are the other Cup regulars entered this week and join Earnhardt on the grid for this race – one of the most highly anticipated of the season.

Richard Childress Racing’s Tyler Reddick – a four-race winner this year and the defending series champion – arrives in Darlington with a 45-point edge on Joe Gibbs Racing’s Christopher Bell. The two drivers have only three starts between them at Darlington. Reddick finished third last year and Bell qualified on the outside pole position, but crashed and finished 34th. Stewart-Haas Racing’s Cole Custer remains third in the standings with five victories – completing a triad of domination this season between the championship leaders.

Bell, who earned his first win on a road course at Road America last week, has a series-best six wins on the season. His latest triumph put him in elite company – tying him with Sam Ard for the most wins for a driver in his first 64 series starts. Bell has 15 top-five and 16 top-10s in 23 races so far and his 13 stage wins are most in the field.

This triumphant trio has set a high bar for sure. And while seven drivers have already clinched a spot in the 12-driver Playoff field, there is a lot of competition for the remaining five positions. Only JR Motorsport’s Noah Gragson and Kaulig Racing’s Justin Haley can possibly clinch a postseason position this week on points.

Among those still vying for a Playoff spot are rookie John Hunter Nemechek, who along with Gray Gaulding, and Haley will be making their Xfinity Series debut at Darlington.

WDUN will carry live MRN Radio coverage of this weekend's NASCAR action from Darlington Raceway, beginning on Saturday with the NASCAR Xfinity Series Sports Clips 200 beginning at 3:30 pm on 102.9 FM and streaming live on AccessWDUN.  Coverage continues on Sunday with the 70th annual Southern 500 for the Monster Energy NASCAR Cup Series beginning at 5 pm on 102.9 FM, AM 550 and streaming live on AccessWDUN.

Monster Energy NASCAR Cup Series
Next Race: Bojangles’ Southern 500
The Place: Darlington Raceway – Darlington, SC
The Date: Sunday, September 1
The Time: 6 p.m. ET
TV: NBCSN, 5:30 p.m. ET
Radio: MRN, SiriusXM NASCAR Radio
Distance: 501.3 miles (367 Laps); Stage 1 (Ends on Lap 100),
Stage 2 (Ends on Lap 200), Final Stage (Ends on Lap 367)
2018 Winner: Brad Keselowski
What to Watch For: Johnny Mantz won the first Darlington race in 1950 driving a Plymouth and he still holds the record for victory from the farthest starting spot on the grid (43rd). … NASCAR Hall of Famer David Pearson holds the record for most victories (10) and pole positions (12). … Among active drivers, Jimmie Johnson leads in wins (three) and Kevin Harvick and Kurt Busch lead in pole positions (two). … Richard Petty has the most starts (65) at the track. Kevin Harvick and Kurt Busch each have 22 – most among active drivers. … Kurt Busch (2001) and Clint Bowyer (2007) earned their first career Cup pole positions at Darlington. Busch remains the youngest in history to do so – earning the pole at the age of 23 years, 29 days in September, 2001. … Ford owns the most pole positions (43) among manufacturers. Chevrolet has 21 and Toyota has two. … There are six former winners in the field this weekend. Jimmie Johnson (three) and Denny Hamlin (two) are the only multi-time winners. … The youngest driver to win at Darlington is Kyle Busch, doing so at the age of 23 years, eight days in March, 2008. … Hendrick Motorsports is the winningest organization at the track with 14 victories earned by six different drivers. … Chevrolet leads manufacturers in wins (41). Ford has 29 and Toyota, six. … The pole position is the winningest starting position – producing 20 winners. Kevin Harvick is the last to win from pole (2014) and the only active driver to do so. … Denny Hamlin holds the record among active drivers for runner-up finishes (three). Darrell Waltrip holds the all-time record at eight. … Richard Petty has earned a record 25 top-fives at Darlington. Jimmie Johnson has the most among active drivers (nine). … Bill Elliott holds the record for top-10 finishes (35). Ryan Newman (13) has the most among active drivers. … Denny Hamlin’s 6.154 average finish in 13 starts is best among all current drivers with at least three starts. It is second best all time – and tops all-time, for drivers with at least four start. … The closest Margin of Victory is .002-seconds when Ricky Craven edged Kurt Busch in March, 2003. … Hall of Famer Dale Earnhardt holds the record for laps led (2,648). Kyle Busch has led the most laps (598) among active drivers. …. Kevin Harvick’s win in 2014 was the last overtime victory at the track.

NASCAR Xfinity Series
Next Race: Sport Clips Haircuts VFW 200
The Place: Darlington Raceway – Darlington, SC
The Date: Saturday, August 31
The Time: 4 p.m. ET
TV: NBC, 3:30 p.m. ET
Radio: MRN, SiriusXM NASCAR Radio
Distance: 200.08 miles (147 Laps); Stage 1 (Ends on Lap 45),
Stage 2 (Ends on Lap 90), Final Stage (Ends on Lap 147)
2018 Winner: Brad Keselowski
What to Watch For: Elliott Sadler is the last Xfinity Series fulltime driver to win this race in 2016. …. Geoff Bodine won the first Darlington Xfinity Series race by 4.94-seconds over Georgia Racing Hall of Famer Jody Ridley in April, 1982. … Cup regular Denny Hamlin is the last driver to win back-to-back races (2006-07). Hamlin is the winningest active driver in the Darlington Xfinity race with five victories – each time from the pole position, an unprecedented feat. … NASCAR Hall of Famer Mark Martin and NBC broadcaster Jeff Burton are the only two drivers to win this race three consecutive times – and Martin did it twice in the 1993-94 and 1999-2000 seasons. … Mark Martin holds the record for most race wins (8). He also started from the pole position eight times. … The pole position is the winningest starting spot on the grid producing 15 winners. The outside pole is the next most productive (10 winners). … The most lead changes in a race is 22. It happened in Mark Martin’s 2000 win. … The last three races have been won by three different manufacturers. … Ford and Chevrolet are tied with 17 wins each. Toyota has seven. … Ford holds the record for consecutive wins (seven). That happened between 1999 and 2002 with Mark Martin and Jeff Burton each winning three times and Jeff Green winning once. … None of the current Xfinity Series championship leaders – Tyler Reddick, Christopher Bell or Cole Custer – has won at Darlington previously. Bell came the closest finishing runner-up to Brad Keselowski last year. …. In the last 10 years, the largest Margin of Victory is 3.677-seconds when Kyle Busch beat Denny Hamlin in 2011. … The slimmest Margin of Victory in the last 10 years is .185-seconds when Denny Hamlin edged Joey Logano in 2017. … In five of the last 10 races, the winner has led the most laps. … The farthest spot on the starting grid a winner has started is 36th – Larry Pearson started there in his 1995 victory. … Only seven times in the 58-race history has a race winner started 20th or worse.