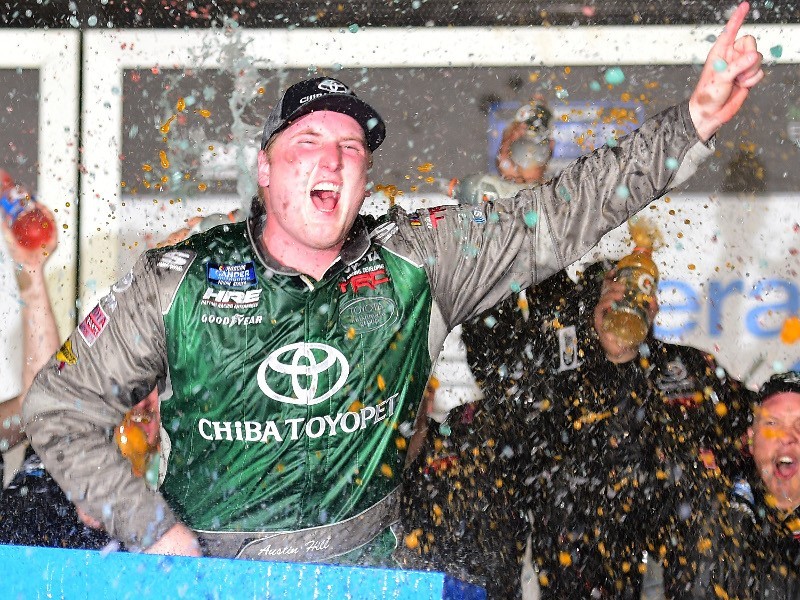 MOORESVILLE, N.C. – Hattori Racing Enterprises (HRE) announced Tuesday that the team has re-signed Winston, Georgia’s Austin Hill to return to the seat of the No. 16 Toyota Tundra for the 2020 NASCAR Gander Outdoors Truck Series season.

The effort will feature an increased presence by United Rentals as the primary partner for multiple races, as well as returning partner Weins Canada with support from Toyota Racing Development (TRD).

“It’s awesome to be coming back in 2020,” Hill said. “We have plenty left to accomplish this season, and that’s our number one focus, but it’s great to have things in place for next year to where we can move right into 2020. A year ago, I never thought I’d have a real chance to be at a place like HRE, but (team owner) Shige (Hattori), Mike Greci, (crew chief) Scott (Zipadelli) and all these guys have been awesome to work with.

“This team is in a great position because of a lot of committed partners like United Rentals and TRD. They do so much for us, and we wouldn’t be where we’re at without them. We’ve put together a good year so far, and I know we can do even more next season.”

Through 21 races this season, Hill has put the No. 16 Toyota Tundra in victory lane three times, including the season opener at Daytona International Speedway and gave the organization its third all-time playoff victory at Las Vegas Motor Speedway.

Hill is currently fourth in the Gander Trucks playoff standings and has collected two pole awards along with six top-five and 12 top-10 finishes. Team owner Shige Hattori looks forward to continuing the team’s success this season into 2020 with the core group intact.

“Austin has done a good job this year, and we’re looking forward to improving even more next season,” Hattori said. “It’s great for the team and Austin to have the support from our sponsors like United Rentals, Weins Canada Group, our Toyota Dealer partners in Japan, and TRD. We’re glad to have Austin back for next season, but we want to finish this season strong with another championship.”

Additional sponsorship details will be announced at a later date.