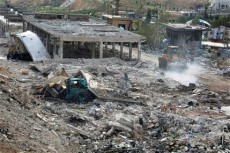 The relatively tepid response to Israel's breach of Syrian sovereignty highlighted Syrian President Bashar Assad's limited options as he, along with allies Iran and Lebanon's Hezbollah, is bogged down at home in a fight for survival against armed rebels.

The airstrikes, which Israeli officials say targeted advanced Iranian missiles intended for Hezbollah, marked a sharp escalation of Israel's involvement in the Syrian civil war. They also raised fears that a conflict that has repeatedly spilled over Syria's borders in the past 26 months could turn into a full-fledged regional war.

Assad's regime might be reluctant to open a new front against Israel with his army already stretched thin in the deadlocked fight with the rebels, but he has a history of operating through proxies such as Hezbollah. One Iranian official hinted the Islamic militant group might take the lead.

Hezbollah has in the past struck Jewish or Israeli targets abroad.

On Tuesday, the pro-government newspaper al-Watan also said the Syrian leadership is now permitting Syrian-based Palestinian factions to "carry out anti-Israel attacks from the Golan and announced its readiness to provide the Lebanese resistance (Hezbollah) with all kinds of weapons."

The newspaper said the Syrian army has a list of potential Israeli targets and they "would be bombarded in the event of any new Israeli aggression."

Israel's government also appears to be steering away from broader confrontation. It has not confirmed officially that it was behind the attacks, but officials have said the strikes were meant to deprive Hezbollah of Iranian weapons shipped via Syria, not to target the Assad regime.

Still, Israel raised the risk of getting drawn into the fighting by striking three times: once in January and then again on Friday and Sunday. Israel also signaled it will keep hitting shipments of guided missiles and other advanced weapons if it suspects they are meant for Hezbollah, a militia it has fought repeatedly, including in a 2006 war.

Since the weekend, Syrian and Iranian officials have repeatedly condemned the Israeli attacks, but have not said what they would do in response. Hezbollah's deputy chief, Sheik Naim Kassem, said in a speech at a Hezbollah rally on Tuesday that Israel's strikes "aim to boost the morale of terrorists," a reference to the rebels.

"At the end of the day, it's an issue of survival (for Assad) and retaliation will further endanger that survival," said Bilal Saab, director of the Institute for Near East and Gulf Military Analysis, North America. "The most existential threat (to the regime) is the rebels, not Israel."

Instead, the Syrian regime has operated through proxies, mainly Hezbollah, but also a small Palestinian militant group, the Popular Front for the Liberation of Palestine-General Command. The group broke away from another faction, the PFLP, in the 1960s, and is widely discredited among Palestinians as a lackey of the Syrian regime.

Anwar Raja, a spokesman for the PFLP-GC, said that once officially instructed by the government, the group is ready to "direct blows at the Zionist enemy at any time and place that would serve the Palestinian cause."

Failure to retaliate for the Israeli airstrikes threatens to further undermine Assad's claim that he is the leader of the hard-line anti-Israel camp. By threatening reprisals for future attacks and sending a militant group into the fray, the regime seemed to be trying to lessen the embarrassment of not acting now.

The PFLP-GC carried out several attacks in Israel in the 1970s, but largely faded away after a deadly 1987 raid of an Israeli army base by a guerrilla who swooped in on a hang glider.

Boaz Ganor, an Israeli counterterrorism expert, said the obscure group could pose a renewed risk because it can get regime weapons, additional men and training for attacks, such as firing rockets into the Golan or hitting Israeli targets abroad.

Assad ally Hezbollah has been linked to a number of such attacks on foreign soil, seen as retaliation for the 2008 assassination of its military commander in an explosion in Damascus blamed on Israel. One of the deadliest attacks with suspected Hezbollah involvement was a 2012 bus bombing that killed five Israeli tourists in Bulgaria.

Other targets have included Israeli embassies in eastern Europe and Asia, though several attacks failed.

Since the weekend, Israel has tightened security at embassies overseas and moved two more anti-missile batteries toward its northern border with Lebanon. Israel also briefly closed the airspace over northern Israel to civilian flights Sunday, but reopened flight paths Monday.

Gen. Masoud Jazayeri, assistant to the Iranian chief of staff, hinted Monday that Hezbollah might take the lead, saying "the resistance," a term for Hezbollah, "will retaliate for the Israeli aggression against Syria."

Yet the Shiite Muslim militia has strong reasons not to seek a full-on confrontation with Israel.

The two sides fought a war in 2006 that ended in a stalemate but also damaged much of Hezbollah's infrastructure in Lebanon and Shiite villages and neighborhoods.

Hezbollah could have difficulty explaining to its Shiite constituents why it's worth getting into another devastating fight with Israel over Syria, Saab said.

"Can Hezbollah launch something against Israel? I don't think so," said Saab.
© Copyright 2020 AccessWDUN.com
All rights reserved. This material may not be published, broadcast, rewritten, or redistributed without permission.