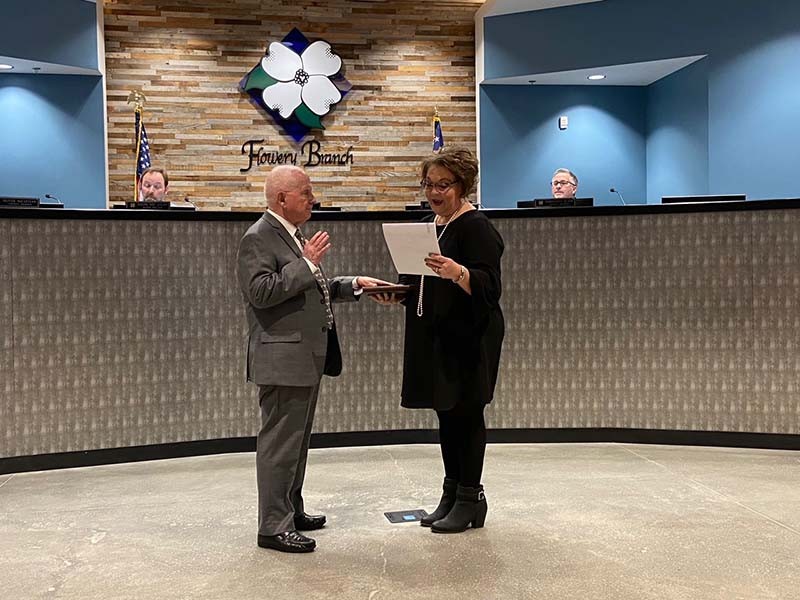 A new mayor, two new councilmen and a new city manager all sat in their first meetings after being sworn in Thursday evening at Flowery Branch City Hall.

For new mayor Ed Asbridge, things were slightly less novel as he had previously served on the city council since 2019.

"I've been up there before but it's quite a bit different," Asbridge said after the meeting. "I don't know how anybody could do the job (of mayor) without being on the council. It's very difficult and there's a lot of work that goes into it behind the scenes. You don't see that."

Asbridge said he expects this to be a busy year for the city.

"First of all, we're going to finish all the things that we have started and have plans for and that's the farmer's market, the streetscapes we're going to do, the ampitheatre we're going to build and then we've got a park to build right behind (city hall)," Asbridge said. "Other things will come, but they're just ideas right now."

The two new city councilmen, Oliver McClellan and William McDaniel, both said they're trying to learn the ropes in the first meetings of the year. McClellan said he's been observing the city council for a while and is excited to be involved in the process.

"I've actually been sitting out here in the audience for two or three years kind of watching and learning, so I know a little bit about what's going on but it's going to be a different story now," McClellan said.

"It's very exciting," McDaniel said. "I'm just looking forward to learning all the stuff that I don't know and doing the right things for the city of Flowery Branch.

McDaniel said his focuses moving foward will be public safety and bringing small businesses to the city. McClellan said one of his biggest priorities is preparing the city's infrastructure for the ongoing growth that is moving into the area.

"We're going to be growing and growing rapidly. It's going to be interesting to delve into what we can do to improve our infrastructure and attract that growth and facilitate that growth without having it overrun us," McClellan said.

For new city manager Tonya Parrish, while Thursday was her first public meeting, she has already been serving the office since being appointed in December. She said so far the transition has been smooth.

"The staff has been fantastic. There's so much going on and I am just excited to be here. There are a lot of projects underway right now and just keeping the public updated, informed and engaged is the goal right now," Parrish said.

The city council's next scheduled meeting is Thursday, January 20.