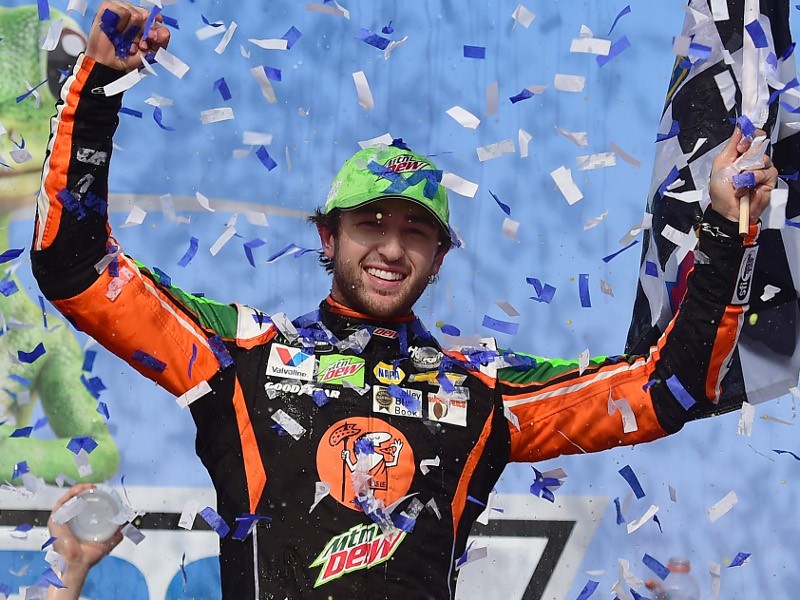 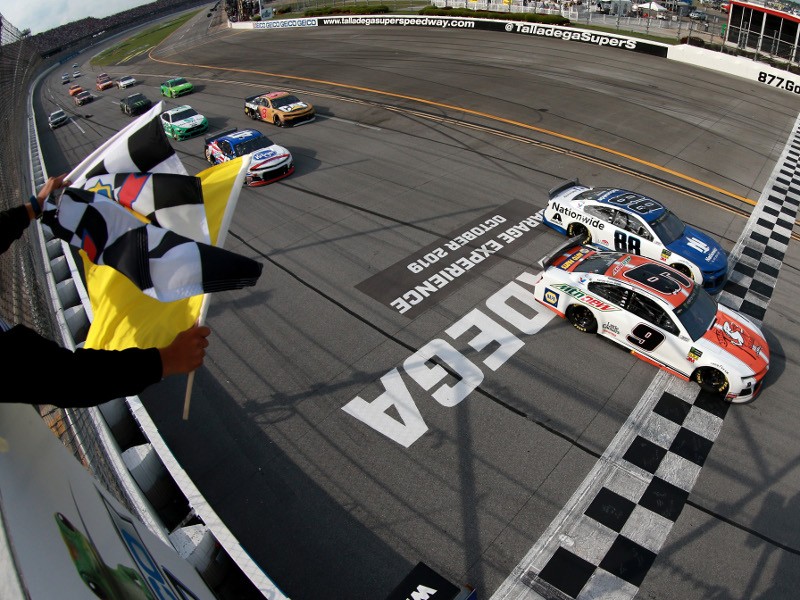 With cars crashing behind him on the final lap, Chase Elliott was locked into his first Monster Energy NASCAR Cup Series superspeedway victory Sunday at Talladega Superspeedway.

The Dawsonville, Georgia speedster took the lead when Joey Logano and Kurt Busch pushed up the track while battling for the top spot ahead of him.

Elliott powered by, with teammate Alex Bowman pushing from behind. Elliott held the spot as the white flag came out. Behind him, Ricky Stenhouse, Jr. spun into the outside wall just past the tri-oval, but the race remained under green.

That drew the caution, freezing the field and ending the race with Elliott as the leader, giving him his fourth career MENCS victory.

“That was huge. We just had a plan and executed really well,” Elliott said. “Obviously it could have gone both ways but fortunately everybody stayed together and stayed the course and had some help on that last lap with the caution.

“I just appreciate all the support. This is unbelievable. This is special. This is close to home for me. It feels a little bit like a home race.”

Elliott led 44 laps on the day, and he also won the second segment of the race.

The win also Elliott a victory at a track that his Hall of Fame father, Bill Elliott, scored wins and set all-time speed records at in the 1980s.

More importantly, it locks the 23-year-old into the MENCS post-season later this year, no to mention giving Chevrolet its first points paying win of the season.

“What a day,” Elliott said. “Just a huge thanks to all of our partners, my team, Hendrick Motorsports, Chevrolet. There was obviously a lot of teamwork done today.”

For Bowman, it marks his best career finish Cup Series finish, with his previous best being a third last year at Pocono.

“Yeah, there was no plan coming off turn 4, but unfortunately we didn’t get there before the caution came out,” Bowman said. “Big props to Chevrolet and everybody at Hendrick Motorsports. They brought great race cars here.”

Rookie Ryan Preece came home in third , while Logano, who led 37 laps on the day, had to settle for a fourth place finish.

“At the end the 1 (Kurt Busch) had a big run and I felt like I had to block that,” Logano said. “When I blocked that I can’t block both and the 9 (Elliott) got underneath me. If I chose the bottom and block the 9 I had the 88 (Bowman) there and they were going to go by me as soon as they formed a run. I was not in a very good spot.”

Sunday’s race was the first run without a restrictor plate at the 2.66 mile superspeedway since 1987. Competition saw cars able to close on each other in the pack, and mount charges on each other. In all, there were 38 lead changes among 16 drivers on the day.

The race saw several multi-car crashes. The first came 10 laps into the 188 lap event, when Darrell Wallace, Jr. spun after trying to draft with Ryan Blaney. That gathered up several other cars, including pre-race favorites Kevin Harvick, Clint Bowyer and Denny Hamlin, along with Ryan Newman, Michael McDowell and Matt Tifft.

Much of the middle portion of the race ran without incident. Ty Dillon won the first segment of the race, while Elliott won the second segment.

With cars jockeying for position and pushing and shoving as the laps wound down, it was inevitable that there would be trouble in the closing laps. Things finally boiled over with seven laps to go when the Chevrolet of Chris Buescher spun in the middle of the pack after contact with another car. That left Matt DiBenedetto with nowhere to go, making hard contact with Buescher’s car, sending it airborne momentarily. Martin Truex, Jr. and Justin Haley were also gathered up.

Fortunately, no one was injured, but that led to a red flag condition to allow track crews to clean up the scene.

That set up the final four lap dash to the finish, which ended before the checkered flag when Byron, Earnhardt and Larson crashed on the backstretch.

Larson’s car tumbled several times down the backstretch. Fortunately, no one was injured in that crash either.

Larson said it was the longest flip of his career.

“Initially, I thought I was going to hit the inside wall pretty hard, Larson said. “And then right before I got to it, I felt it lift and was just hoping it would set down, and then it just started tumbling. That was probably the longest flip I’ve ever had. I haven’t seen a replay of it. I didn’t know if it would ever stop. I knew I was flipping and was just hoping that I wasn’t going to get any closer to the catch fence, so it was a little bit scary, but thankfully I’m all right.”