Legendary Georgia racer and hall of famer Bud Lunsford of Gainesville passed away on Monday at the age of 86.

Lunsford, a member of both the Georgia Racing Hall of Fame and the National Dirt Late Model Hall of Fame, was one of the most popular and prolific drivers ever to compete out of the Peach State, scoring 1,139 wins in a career behind the wheel that spanned some 25 years.

Outside of the race car, Lunsford would become one of the most respected and revered race track promoters in the country.

"He wasn't just a great race car driver and a great promoter, but he was a great person,” said Georgia racing historian Mike Bell of Gainesville.  “That's why the pits at his race tracks were always full, because everyone knew that no matter what the controversy, they would get a fair deal from Bud Lunsford."

Lunsford’s career as a driver started in 1954, as he ran his first career race at Canton Speedway in 1954.  One day later, he ran his second career race at the Gainesville Looper Speedway, which now lies under Lake Lanier.

Lunsford won his first race in 1955 at Georgia's historic Toccoa Raceway, a track he would see much success at.  He would compete all over the southeast, but always with the aim of being close to home.  He was a “money racer”, choosing to barnstorm around the area to compete in races with bigger payouts than to stay at one track week in and week out.

He even took on a challenge in a match race against a Ferrari at a sports car event at the Gainesville Airport in the late 50’s, where he was soundly beaten in a full bodied 1957 Chevrolet.

The one exception to the barnstorming for Lunsford came at the legendary Peach Bowl Speedway, a tight, flat, paved 1/4-mile track located on Brady Avenue, just a few blocks away from the Georgia Tech campus in Atlanta.

Lunsford won almost every race held at the track in 1959, scoring the championship in the process.  He would back that up with two more track titles in 1960 and 1961, cementing his place as a Georgia racing legend.

Lunsford’s racing career would take its first stint from behind the wheel in 1969, when he teamed with two partners to build the famed Dixie Speedway in Woodstock, Georgia.  After a time behind the scenes, Lunsford sold his share of the track and went back to racing.

In 1971, he would purchase Douglasville Speedway, making improvements and renaming it West Atlanta Speedway.  A few years later, he would sell the track and go back to racing full time.

While racing was his main vocation, it wasn’t his only sporting interest.  His outside sport of choice was basketball, where he would play in amateur leagues in Gainesville during the off-season to stay in shape.

Meanwhile, back on the track, Lunsford would continue his barnstorming ways.  He scored one of the biggest paydays of his career on October 28, 1979 with a $15,000 victory in the NDRA Dixie 100 at Dixie Speedway, marking his first win with the popular touring series.  He followed that up with another NDRA win on April 20, 1980 at Rome Speedway.

In 1981, Lunsford’s attention again moved outside of the race car, as he went to work to open another race track – this one close to home.

Lunsford worked for two years between buying land, getting permits and planning the layout of his latest venture, the Lanier Raceway.

Located on Winder Highway between the Georgia towns of Braselton and Oakwood, the 3/8-mile dirt track was nestled in a little valley right across the road from the famed Road Atlanta sports car road course.  With the natural hills providing the perfect spot for a 6,000 person grandstand along the front stretch and a triple-tiered trackside parking hill on the backstretch, the speedway would quickly become one of the most popular in the southeast.

The track opened in the spring of 1982 to capacity crowds and pits full of race cars.

"We used to average 200 race cars, not counting the people who'd come watch them,” Lunsford said in 2016.

Lunsford would operate the facility as a dirt track until 1987, when he could see that paved asphalt racing was the way to go.

"Bud made asphalt racing in North Georgia,” Bell said.  “He raced on dirt, but he knew the future was on asphalt. He raced up to a point, and then ran a dirt track before paving Lanier.  That put asphalt racing on the map, and made it a big deal for decades.”

That first year the track operated as a paved facility, Lunford was named the “Auto Racing Promoter of the Year.”

Over the 15 years Lunsford owned Lanier Raceway, it would see the top talent and series compete there.  While still dirt, the track played host to the World of Outlaws Sprint Car Series, and to the Busch All Star Series, as well as bringing local heroes like Smiley Rich and Debris Brown to the forefront.

"The people you'll (meet) in racing and at the race tracks are fine people,” Lunsford said in 2016. “They're not stuck up, they're down to earth people, and they'll come to your rescue in the middle of the night. Some people won't."

While Lunsford stopped competing around 1981, his last win actually came in 1989 at the place where it all started – Toccoa Raceway.  He took part in an invitational event at the 3/8-mile dirt track and scored the win, despite having been out of a race car for some eight years.

Lunsford sold Lanier Raceway after 15 years of running it, but he was never far from racing.  He was inducted into the National Dirt Late Model Hall of Fame in Walton, Kentucky in 2003, and was voted into the Georgia Racing Hall of Fame in Dawsonville, Georgia in 2005.  He remained a supporter of Lanier Raceway, attending the most recent stock car event there in November of 2019.

Around his hometown of Gainesville, he was just as well known for his prowess as a bowler.  He and his family ran the Gainesville Bowling Center on Browns Bridge Road for many years, and – when not bowling - Lunsford could often be found talking old times with his racing buddies between games.

"A person... that's never worked a day in their life has really enjoyed their work,” Lunsford said in 2016. “And I really enjoyed it... I could not wait until Monday morning to get back to the shop to work on my race car. I've really enjoyed my life."

Bud Lunsford is survived by his wife Laquita and his daughter and son in law, Debbie Lunsford Love and Mike Love.

Funeral services will be held at 1:00 p.m. on Friday, December 10 at Memorial Park Funeral Home. 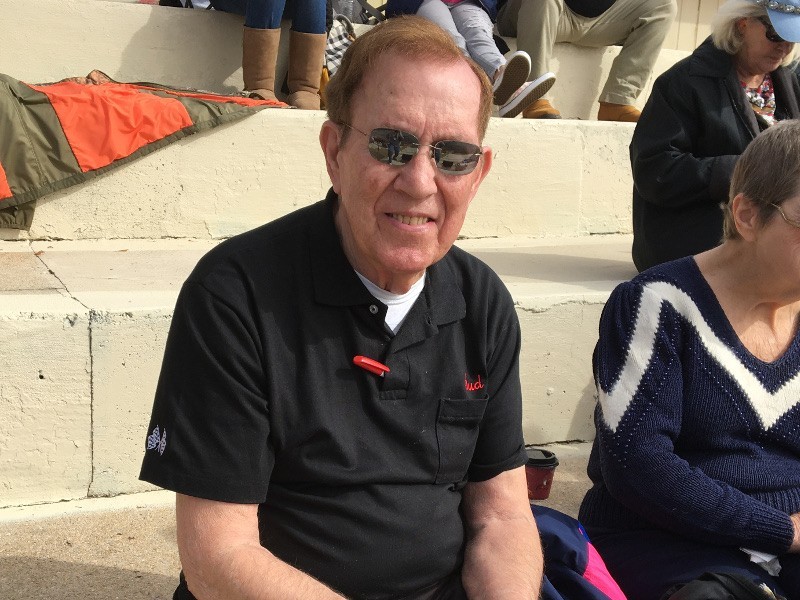 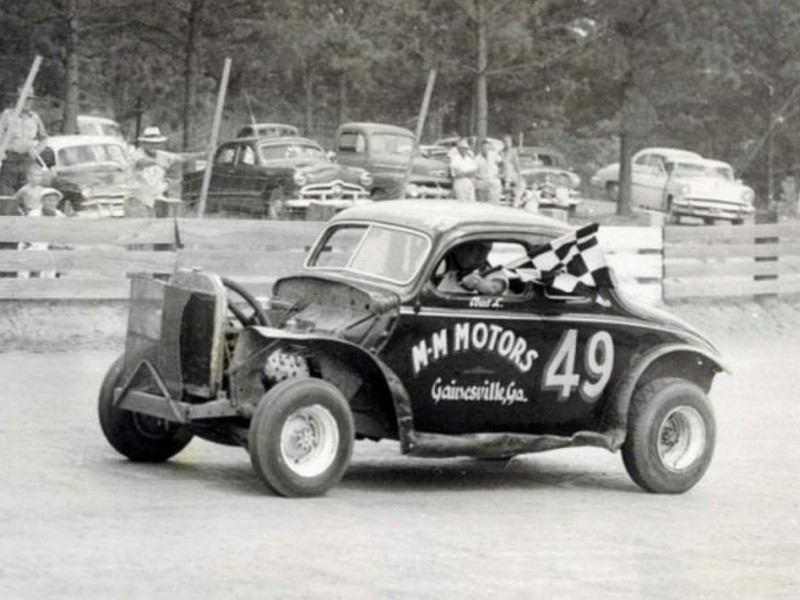 Georgia Racing Hall of Famer Bud Lunsford on the backstretch at Banks County Speedway during a victory lap. The win came during the track's first year of operation in 1956. Photo: Mike Bell Collection 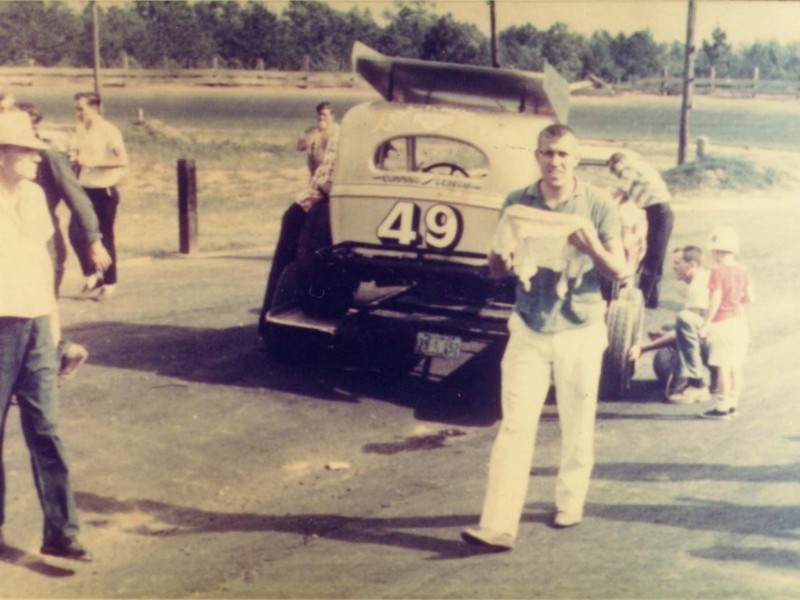 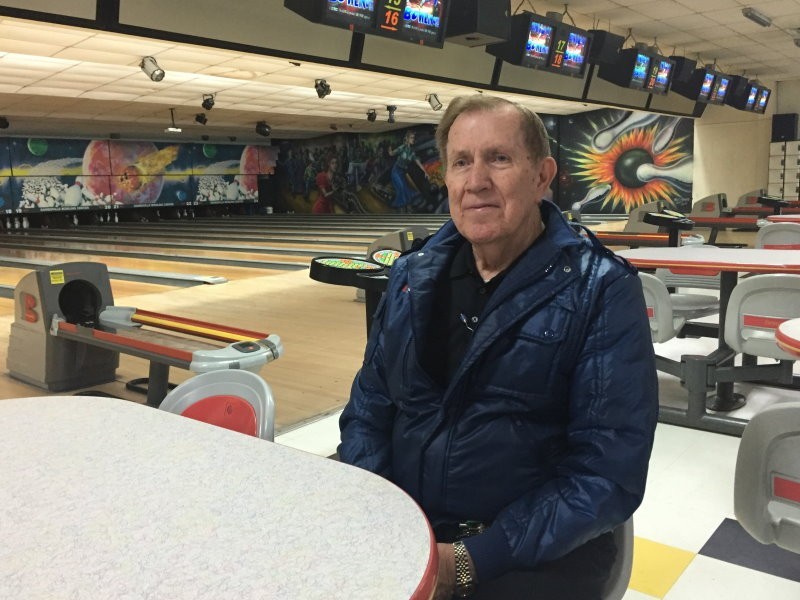 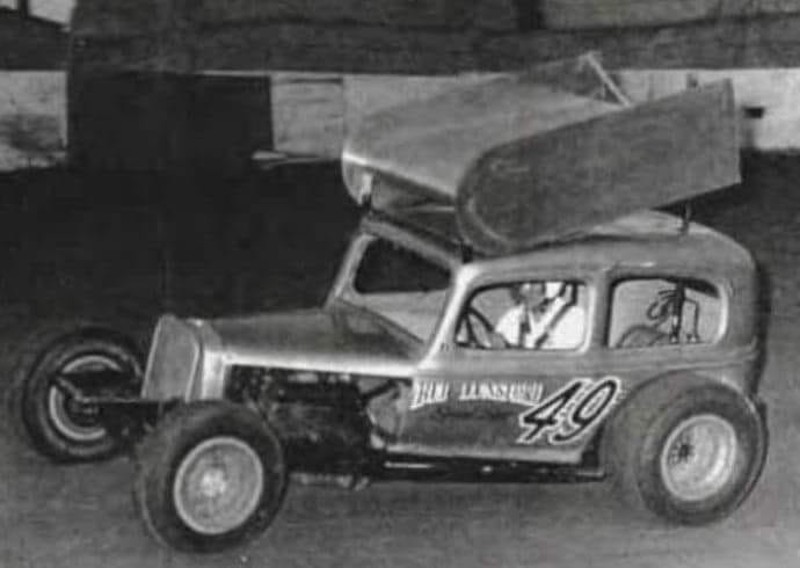